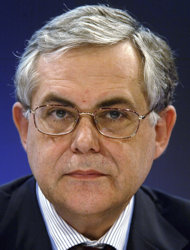 ATHENS, Greece (AP) — Senior banker Lucas Papademos was named Thursday as the prime minister of the new Greek interim government, charged with keeping the debt-strapped country out of bankruptcy and firmly in the 17-nation eurozone.


After four days of intense political negotiations, the 64-year-old former vice president of the European Central Bank was chosen to lead a coalition backed by both the governing Socialists and opposition conservatives that will operate until early elections in February.


A statement from the president's office said Papademos would form an interim government that will secure and implement the decisions of a €130 billion ($177 billion) European debt deal agreed upon during a summit in Brussels on Oct. 27. That deal is the country's second massive bailout, after a first €110 billion ($150 billion) rescue package was deemed not enough to keep Greece from bankruptcy.


The new cabinet will be sworn in Friday afternoon.
The latest Greek crisis erupted last week, when Papandreou said he would put the hard-fought European debt deal, that involves private bondholders canceling 50 percent of their Greek debt holdings, to a referendum. The announcement horrified European leaders, sparked a rebellion in his own party and caused an uproar in financial markets.
Papandreou withdrew the referendum plan and agreed to step aside for a unity government.
Papademos, a former ECB vice president who is not a member of any party, has been operating lately as an adviser to the prime minister.
Shares on the Athens Stock Exchange were up 2.1 percent at 783.28 on the prospect of a power deal. That came despite more bad news for Greece's recession-hit economy: unemployment surged to 18.4 percent in August, up from 12.2 for that month in 2010.
Other eurozone nations have refused to give Greece its latest installment of bailout cash — €8 billion ($11 billion) — until the country approves the second bailout deal, which took European leaders months to hash out.
The markets want clarity soon so the new government can secure bailout cash to avoid an imminent bankruptcy that could push Europe into a new recession and world financial markets into turmoil. Source
Angelo: We are inspired by "Wahrheit" who posted this link at maxkeiser.com under our published heading. Indeed Greece has just died, without further revolution, they have simply become debt slaves to the world banks. The loss of their sovereignty is now signed, sealed and soon nothing that was once publicly owned will belong to the people and at a similar pace foreclosure will be brought to bare on the assets of private ownership. DEAD.
Posted by Angelo Agathangelou at 5:58 pm