Russian tycoon Alexander Lebedev has attacked a fellow businessman during the pre-recording of a talk show on the economic crisis for TV channel NTV.
Mr Lebedev, a former KGB agent who own UK newspapers the Independent and Evening Standard, lashed out at Sergei Polonsky several times, knocking him from his chair.
Yekaterina Gordeyeva, NTV reporter and one of the talk show hosts, said that such a incident was not anticipated, but that "if the oligarchs are fighting, then it means... the crisis is a really worrying issue."
Steve Rosenberg reports on BBC News.
Posted by Angelo Agathangelou at 7:43 pm

Where Is The Dutch Gold?

Dutch Socialist Party has asked the Secretary of the Treasury for the whereabouts of the Dutch Central Bank’s gold. On Friday 16 September, the Dutch Socialists Party (SP)’s spokesman for financial affairs, Mr. Ewout Irrgang, has asked the Dutch Secretary of the Treasury 10 detailed questions about the gold supposedly held by the Dutch Central Bank. Questions vary from: where is the gold? why are gold and gold receivables one line item? how much gold is loaned out? All questions (in Dutch) can be found here and copied below. This is potentially a big breakthrough for global awareness on how central banks hide crucial info from the public and the disastrous effects central banks have on society. The society benefits from competitive currencies, chosen voluntarily by the people.The Questions:
1. Did the Dutch Central Bank (DNB) loan part of their gold?If yes, how much and to whom?2. Why are gold and gold loans stated as one line item in the annual report 2010 instead of mentioned as 2 separate items?3. Can you give an overview of the yearly yields of the gold loans during the past years?4. Where IS the physical gold of DNB? At which locations and how much is where?What is the reason that the gold is still at these locations?5. What was the most important reason for DNB to sell the gold in the past? Are the storage costs a reason?What are the actual costs to store the gold?6. Can you confirm that since 1991 of the 1700 tons of gold about 1100 tons have been sold?Is the remark of journalist Peter de Waard correct that because of these historic sales there is a loss of about 30 billion euro?If not correct, what is the right amount?7. How much of the National Debt has during the past 20 years been paid off with the proceeds of the gold sales? Are you of opinion that the sustainability of the national debt will be improved by paying off the debt and at the same time selling the gold?8. What is in your opinion the present function of the gold stock?9. What is the relation between the size of the market of the gold stock and the size of the market of gold derivates?What are the possible consequences of this?10. Can you confirm that recently a number of countries have even enlarged their physical gold stock?Do you have an explanation for this development?

Billboard Battle and the Israeli-Palestinian Conflict/Land-Grab

WESPAC Foundation's subway ad campaign is the first volley in a war of words playing out on billboards.
A pro-Israel group plans a counter-campaign. 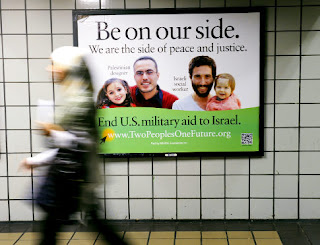 A subway station billboard war is the latest flare-up in the Israeli-Palestinian conflict.

The dispute began with posters urging an end to U.S. military aid for Israel, prompting a City Council member to demand an end to the ads - and spawning an upcoming series of counter-ads.

"I would urge you to disallow and/or remove these advertisements."

The group behind the ads, the Westchester County-based WESPAC Foundation, said the subway spots are intended to encourage dialogue and not dissension. BY Pete Donohue, Matthew Deluca and Larry Mcshane of DAILY NEWS (Original Source)

"Israel To Return West Bank... in the rest of the world's dreams."
In Israel, concern is growing that it may have to return land it has long occupied and built settlements on if Palestinian statehood is officially recognized by the UN.
­On Friday, Palestinian President Mahmoud Abbas made a passionate televised speech vowing to seek full recognition for his country at the UN General Assembly next week.
If successful, the move will come as a blow to the corrupt US representatives who have used the full diplomatic might they control to derail the bid, which they now promises to veto.
Posted by Angelo Agathangelou at 10:00 am

The Trial and Death of Socrates

Lessons from "the wisest man in the world"(quote by the Oracle). Regarding the state of our world at war and in corruption, we could use the power of Socrates reasoning today to help navigate out of this mess. Stefan Molyneux "Freedomain-Radio" helps us to dissect and consider. The Tragedy of the Fallacy of Passion.
Posted by Angelo Agathangelou at 9:50 am 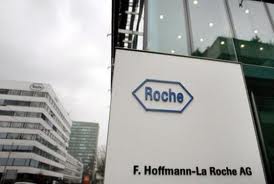 Swiss drug giant Roche Holding AG has stopped delivering its drugs for cancer and other diseases to some state-funded hospitals in Greece that haven't paid their bills, and may take similar steps elsewhere, a stark example of how the European debt crisis that has jolted global financial markets is having a direct effect on consumers.
In Greece, Roche is boosting deliveries to pharmacies, which have paid their bills more reliably, Chief Executive Severin Schwan said in an interview on Friday. Patients at some hospitals now must take their prescriptions to a local pharmacy, and, in the case of intravenous or injected cancer drugs, bring them back to the hospital to be administered, he said. By JEANNE WHALEN of the Wallstreet Journal (Click here for the full story)
Posted by Angelo Agathangelou at 9:30 am