Julian Assange "This Is About The Construction Of Law"

Would anyone like to comment on these? This is reportedly a pro Gaddafi demonstration. I do not have a clue, but I am quite sure that our government is just as corrupt with it's links to the military industrial complex as with it's links to the Banksters as even when we all demonstrate, they still send us to war and they barely bother to cover up or apologise for mistakes. First hand witness comments very welcome.
Posted by Angelo Agathangelou at 8:05 pm

Posted by Angelo Agathangelou at 7:00 pm 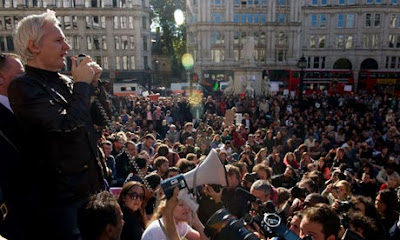 Today the Occupy movement, which has been protesting in New York for the past month, comes to the UK with a march on the London Stock Exchange. Campaigners are to gather outside St Paul's Cathedral at midday on Saturday before marching the short distance to Paternoster Square, home of the Stock Exchange, as well as the London head office of investment bank Goldman Sachs. There will be live video from the protest from midday.
The protest has been organised on Facebook and Twitter pages that between them have picked up more than 15,000 followers. The organisers of Occupy London say they "intend to highlight and address social and economic injustice in the UK and beyond, as part of a global movement for real democracy." Source.

Posted by Angelo Agathangelou at 6:48 pm

EU's actions could lead to revolutions in Greece and Portugal

Posted by Angelo Agathangelou at 6:40 pm

I have been in touch with the UK Pirate party and await further information. They offer the same open government that Stella Hender and I were suggesting in 2006 and the Pirate Party is no joke, their recent multiple election victories in Germany and their growing movement across Europe an the UK testify, they are very serious. How much would your medication cost if patent laws were scrapped? More money for nurses and doctors! These laws serve the 0.01% super rich not the vast majority. How would we better off with a repeal of prohibitions?  Criminality would drop and our police would be able to spend more time focusing on protecting individuals and the property. How would we be better of with open completely transparent government? The Pirate party makes perfect sense to us. Your views are welcome.
Posted by Angelo Agathangelou at 3:19 pm

Posted by Angelo Agathangelou at 1:00 pm

Which side are you on boys?
Global Revolution Live Stream


Posted by Angelo Agathangelou at 12:22 pm

Posted by Angelo Agathangelou at 2:17 am

ALL OUT CALL FOR HELP #OCCUPYWALLSTREET

TOMORROW'S ACTIVITIES: https://www.facebook.com/event.php?eid=159977090763817
Update: There's been a massive outpouring of support. Thank you everyone! City hall has definitely heard us.
Update 2: Apparently our, and other lawyer groups around the nation are making their voice heard, telling Bloomberg that he can not simply "Shut them down" to use his (supposed) phrasing. This is wonderful. Again, thank you everyone!
Update 3 - 10/14/2011 : Politico is reporting that they're backing down! Thank you for the support everybody! We'll be on guard going forward, but this is a great moment for all of us. Throughout last night, you all kept the Mayor's line incessantly ringing (over 30 minute delay!), and the owners of Zucotti Park apparently received numerous legal, and political statements condemning their actions. Thank you everybody!
Additional Information: Thank you for your help there reddit! A number of grass roots organizations, reddit, and unions got the word out. Apparently the mayor's office phones were backed up over 30 minutes with the city operators constantly answering calls. The owners of the Brookfield building received numerous complaints.
Politicians came out in support of OWS, and legal groups from the ACLU & NLG to local lawyers stated the illegality of such action and condemned the mayor's statements. For today, at least, we're safe!
Update 4 Apparently there were numerous protestors arrested this morning during the daily morning march. I don't have any additional information at this time
Mayor Bloomberg has announced that sometime Friday, as early as 6am, as late as Saturday morning, Mayor Bloomberg will begin forcibly removing protestors from the square for "Cleaning Operations".*
Upon "being allowed to return" protestors will have to stay in accordance with his new "Brookfield Rules" which include bringing no equipment into the park, no tents, no water proof tarps, and NO LYING DOWN AT ANY TIME.
.
WHY THIS MOVE BY Mayor Bloomberg WAS EXPECTED
Not only are these Rules untenable, but this is the exact same manner in which Bloombergville (a 2 week occupation at City Hall earlier this summer), was shut down, as well as the same way the M-15 encampments in Barcelona and Madrid were ended last Spring.
.
WHY THIS IS NOT REALLY ABOUT SANITATION
While OccupyWallStreet's sanitation teams have repeatedly welcomed help from the city for keeping the park clean, we have been repeatedly refused, with the city turning off power, and blocking all attempts for PortaPoties and Dumpsters near the Occupation Site, making us reliant on the help from local businesses. Even getting trash and recycling collected by the sanitation department has proven difficult. If Mayor Bloomberg was really interested in sanitation, he would have worked with us to achieve such goals on his behalf.
.
WHAT WE ARE DOING
As OF TODAY #OCCUPYWALLSTREET is beginning Operation Sanitation. Our internal sanitation teams are currently going into overdrive. Brooms, trash bags and powerwashers will be going for the next 24 hours.
Update 8:51pm: This place is so clean right now its amazing. Let's keep it that way!
.
WHAT YOU CAN DO TO HELP
WE NEED PEOPLE TO PROTECT THE SQUARE. WE ARE NOT LEAVING. Come to Liberty Plaza, wearing suits or well dressed, and bring cameras. If you are a member of the military, a veteran, a firefighter, ex-police officer, union member, or anyone who is, or sympathizes with, the 99%, this would be a great time to show of support! Don't let them shut us down. We need you there for AT LEAST 24 hours, starting tomorrow at 6am.
Please respect our clean park.
.
Call 311 (or 212-NEW-YORK if you're out of town) and tell Bloomberg to support our right to assemble and to not interfere with #OWS. It seems the Mayor has forgotten who he is supposed to represent. Remind him!
Posted by Angelo Agathangelou at 2:10 am