Message: Greetings, We are Anonymous.

Over the past month, we have witnessed the Occupy protests grow to unbelievable strengths. 82 countries and 1000 cities are currently joining in the Occupy movement. Occupy Wall Street is currently heading into its 30th day of protest and is showing little signs of stopping.


This November the 5th, we invite you to join us,
for Bank Transfer day.

We invite you to remove all funds from your bank account
and transfer them to a not-for-profit credit union.

Together, we will show banks a day they will never forget.

They will remember, the 5th of November.

We are Anonymous. We are Legion.
We do not forgive. We do not forget.
Expect us.
Posted by Angelo Agathangelou at 10:00 pm

Alec Baldwin on Ending The Fed

"It's very important for a handfull of people to be able to make hundreds of shmillions like Steve Jobs. HahahahahahooHA!"
Posted by Angelo Agathangelou at 9:00 pm

Police and protesters in Athens clash outside the parliament as the so-called “mother of all strikes” is underway in Greece. Over 125,000 people are taking part in the largest protest since financial turmoil began crippling the country.


"Thieves!" and "That's enough!" read the banners of the thousands-strong crowd assembled in front of the parliament building in Athens on Wednesday. The police estimated some 70,000 people gathered for a rally in the capital alone, while the protesters themselves put the figure at over 125,000.


The multiple riot police forces gathered in the city for the occasion tried to stun the demonstrators with flashbangs. But the only effect it produced was the demonsrators booing every time they went off, as RT's correspondent Sara Firth reports direct from the Greek capital.

Eventually, some protesters, heated up by the standoff and backed by masked and hooded anarchists, started throwing Molotov cocktails and stones at the law enforceres. The police responded with tear gas.

Nevertheless, the protesters managed to push up to the steps of the Parliament building itself, which has not been seen since the outbreak of the financial crisis in the country two years ago. A sentry box occupied by the ceremonial guards was put on fire, while huge litter piles were burning all over the capital. Source.
Posted by Angelo Agathangelou at 8:03 pm

US Hawks Hover Over Iran 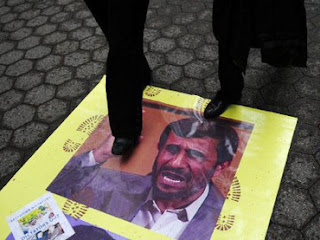 History seems to be repeating itself as the hawks who called for the 2003 overthrow of Saddam Hussein are now rattling their sabres for war against Iran. But why are those who once called for a new American Century hopelessly stuck in a bygone era?
In a bellicose diatribe published in the latest edition of the Weekly Standard, senior editor William Kristol accuses Iran of having the blood of American soldiers on its hands. Claiming that “force” is the only language the regime understands, he proceeds to call on the US Congress to “consider authorizing the use of force against Iranian entities that facilitate attacks on our troops, against IRGC (Iranian Revolutionary Guard Corps) and other regime elements that sponsor terror, and against the regime’s nuclear weapons program.”
In an October 17 Foreign Policy initiative (FPI) Bulletin, executive director Jamie Fly toes the same line, proclaiming:
“Until now, the president has chosen to be the hapless victim of Iran’s machinations. It is time for President Obama to follow in the footsteps of his predecessors and stand up to tyrants who kill Americans and threaten our interests.
It is time to take military action against the Iranian government elements that support terrorism and its nuclear program. More diplomacy is not an adequate response.” Source.
Posted by Angelo Agathangelou at 6:57 pm