Why All The Bees Are Dying?

Posted by Angelo Agathangelou at 11:19 pm

US base in Australia: China on notice

Up to 2,500 US marines will be permanently stationed in Australia within the next six years under a new agreement between the two countries. The move comes as Pacific region’s major player, China, is rapidly boosting its military might.
The news was announced jointly by Australian Prime Minister Julia Gillard and President Barack Obama, who is on a nine-day diplomatic tour of the Asia Pacific. 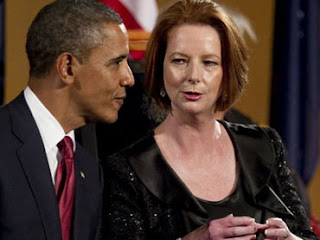 “This region is of great strategic importance to us” said Obama. “We will make sure we are able to fulfill our leadership role in the Asia Pacific region.” “Our alliance has been a bedrock of stability in our region, so building on the alliance through this new initiative is about stability,” said Julia Gillard.
The agreement comes against the backdrop of a rapidly-militarizing China that also figures to be a major player in the region.
Although Obama said he welcomed China’s rise, he also issued a warning: “We will send a clear message to them that we think they may need to be on track, in terms of accepting the rules and responsibilities of being a world power.”
Although the Chinese defense budget is notoriously opaque, experts guess that the country has tripled its spending over the last decade, and now trails only the US in its military expenditure. The Chinese navy is now in possession of its first aircraft carrier – an old Soviet vessel purchased from Ukraine that has been refitted with modern weapons. It also presented a new stealth fighter – the J-20 – on the eve of a visit by US defense officials earlier this year.
Although the US has voiced no plans to construct its own base in Australia, and the initial marine contingent will be only 250, the agreement includes plans for a greater presence of US Navy and Air Force. The marines are also expected to provide combat training not just for Australian soldiers, but those from other countries from the Pacific Basin.
In an interview with the Sidney Morning Herald, Hugh White, the former Deputy Defense Secretary labeled the deployment “very significant and very risky” for Australia. But former Defense Minister Kim Beazley has refused to countenance alarmist scenarios. “The Chinese have gotten used to the fact that Australia and the United States have a very close military relationship. They expect nothing different,” he told the local media.
Nonetheless, after a decade where US attention has been absorbed by the Middle East and Afghanistan, this is yet another sign that the country is turning its eye to the Pacific Basin. Obama has pushed for a greater role for the Trans-Pacific Partnership, a free-trade alliance of mostly Western-leaning economies that has aroused the suspicions of China.
It has also beefed up its existing bases and naval presence, largely in anticipation of ever-growing disagreements around the lucrative shipping lanes in the South China Sea, which are subject to wrangles between China and other regional powers. The marine deployment is merely the latest step in a strategy that has been termed the “Comeback to Asia.”
Whether the policy will be anything other than a symbolic show of support for US allies is another question. Douglas Paal of the Carnegie Endowment told the Washington Post that “The US has no ability to keep China out or to keep China down.”
Posted by Angelo Agathangelou at 11:11 pm

Down but not out: OWS reclaims Zuccotti

Occupy Wall Street (OWS) protestors were back in New York City’s Zuccotti Park Tuesday evening after police evicted them in a pre-dawn raid the very same day. RT was on the scene to film events as they unfolded.
Tuesday evening’s chants of “all day, all week, occupy Wall Street” cut a sharp contrast with the chaos which had unfolded earlier that day. Acting on orders from New York City Mayor Michael Bloomberg, hundreds of police raided and dismantled the park encampment located in the heart of New York’s financial center, arresting 147 people in the process.
After New York Supreme Court Justice Michael Stallman found the city was justified in enforcing a ban on sleeping in the square-block park, some 16 hours after the eviction was carried out, police lifted the barricades and slowly began to allow the protestors back in.
Unlike the preceding chaos which ushered in the day, Tuesday evening’s return was underscored by a sense of hope, as the sound of drums punctuated the intermittent chants. Source 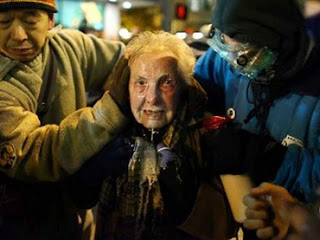 While eyes and ears across the globe were watching Occupy Wall Street protesters reclaim New York’s Zuccotti Park Tuesday night, on the other side of the US police brutally cracked-down on other OWS encampments in San Francisco and Seattle.
In the aftermath of the raids that ravaged those two West Coast cities, more than a dozen protesters found themselves in jail cells, and both an elderly woman and a pregnant teenager tried to cope with the effects of overzealous and outrageous police assaults after surprise crackdowns carried out by police forces. Source
Posted by Angelo Agathangelou at 10:44 pm

The 'Ultimate Disgrace' In Belgium 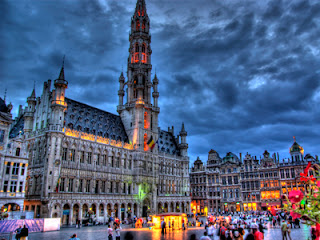 A regular Belgian reader who prefers to remain anonymous writes in regarding Dexia, bailouts, debt, and the lack of a government.

He describes the scene as the "ultimate disgrace."
This morning, the following news broke and provokes A LOT of criticism, despair and anger:

The CEO of ARCO, one of Dexia's main shareholders, which represents (among others) the Christian Trade Union (ACW), has told reporters this morning they will liquidate three of their subsidiaries (Arcofin, Arcoplus & Arcopar).
In a normal free market system you would think "oh, those shareholders will get creamed". But, hey, welcome to Belgium, our government told those cooperative shareholders that the government will guarantee their investments.
Analysts calculated that this might cost our country an additional 1 billion EUR. Source

What's happening in Belgium is becoming a real farçe:
It is very sad, but one would start hoping for "the trojka" (European Commission, ECB and IMF) to intervene and impose highly necessary measures to our country. We will not get out of this mess by ourselfs.
Best regards,
(A reader) Source
Posted by Angelo Agathangelou at 7:20 pm

What gives you the right to dictate to the Italian people? +

Transcript: "Here we are on the edge of a financial and social disaster and in the room today we have the four men who are supposed to be responsible. And yet we have listened to the dullest most, technocratic speeches I've ever heard. You are all in denial. By any objective measure the euro is a failure. And who exactly is responsible, who is in charge out of all you lot? The answer is none of you because none of you have been elected; none of you have any democratic legitimacy for the roles you currently hold within this crisis. And into this vacuum, albeit reluctantly, has stepped Angela Merkel. And we are now living in a German-dominated Europe - something that the European project was actually supposed to stop. Something that those who went before us actually paid a heavy price in blood to prevent. I don't want to live in a German-dominated Europe and nor do the citizens of Europe. But you guys have played a role, because when Mr Papandreou got up and used the word 'referendum'. Or Mr Rehn, you described it as 'a breach of confidence', and your friends here got together like a pack of hyenas, rounded on Papandreou, had him removed and replaced by a puppet Government. That was an absolutely disgusting spectacle that was.And not satisfied with that, you decided that Berlesconi had to go. So he was removed and replaced by Mr Monti, a former European Commissioner, a fellow architect of this Euro disaster and a man who wasn't even a member of parliament. It's getting like an Agatha Christie novel, where we're trying to work out who is the next person that's going to be bumped off. The difference is, we know who the villains are. You should all be held accountable for what you've done. You should all be fired. And I have to say, Mr Van Rompuy. 18 months ago when we first met, I was wrong about you. I said you would be the quiet assassin of nation states' democracy, but not anymore, you are rather noisy about it aren't you. You, an unelected man, went to Italy and said, 'This is not the time for elections but the time for actions'. What in God's name gives you the right to say that to the Italian people.

Posted by Angelo Agathangelou at 3:47 pm

Posted by Angelo Agathangelou at 1:00 pm

America’s whipping up hysteria over the Iranian nuclear program, with the same figures that used to accuse Iraq of possessing chemical and nuclear weapons now repeating themselves with frenetic conviction.
The UN nuclear watchdog is discussing Iran, and the dangers its atomic program might have for the world.
It follows the body's harshest report yet, which claimed Tehran could be developing nuclear weapons, something the country dismisses as American fabrication. Source
Posted by Angelo Agathangelou at 8:55 am

The eurozone is still a danger zone. Italian bond yields reach seven percent. Remember that's the threshold that broke the bank for Greece and Ireland last year. Italy's largest bank by assets and one of the more weakly capitalized in Europe, Unicredit, announced it's going to try to raise $10 billion in capital and cut thousands of jobs. The European Union is going after credit ratings agencies to allow investors to sue them and to warn bond issuers of a change in rating ahead of publishing it. The task at hand according to Angela Merkel is to "build political union in Europe, which "means more Europe," not less. Au contraire says European Member of Parliament Nigel Farage. To call him a Eurosceptic is to put it lightly and we talk to him about Europe, the UK, and the US.
Posted by Angelo Agathangelou at 3:09 am

Occupy camps under attack across America

Nearly 60 days after the Occupy Wall Street movement began, cops across the country cracked down on encampments in Oakland, Albany and cities in-between over the weekend, in a series of events perhaps the most detrimental to the movement so far. Source

Posted by Angelo Agathangelou at 12:48 am

Ireland's Financial Expert Eddie Hobbs advising people to get out of the Euro as it is going to collapse.
Posted by Angelo Agathangelou at 12:30 am