Goldman Sachs bashing and much more from Max Keiser


Max interviews Barry Ritholtz (13 minutes in) about the big lie that bankers did not cause the crisis and what MF Global means to the markets.
Additional:

Former JPMorgan Banker: Exploiting Consumers Is ‘The Purpose Of The Banking Organization’ Source

Posted by Angelo Agathangelou at 10:00 pm

The EU has killed national democracy in Greece, Portugal and each of the 27 EU member states.
Posted by Angelo Agathangelou at 9:48 pm

Clashes between Egyptian riot police and rock-hurling protesters in Cairo's Tahrir Square continue on Sunday, with violence spilling over to other cities. Riot police are said to have gone out in force, using clouds of tear gas to disperse the crowd.
Two people are believed to have been killed and over 670 injured as clashes continue into the third day.
Police were said to be firing rubber bullets and tear gas, and beating protesters with batons in an attempt to clear Tahrir Square overnight, dismantling a tent camp set up to commemorate protesters killed in the February uprising.
According to reports, most of Tahrir Square was covered with debris and shattered glass on Sunday following what is reported to be the worst standoff between police and protesters in months. Source


Reminder: The first revolution 'the fearless Asmaa Mahfouz'
IN SYRIA:


The headquarters of the Syrian ruling party in Damascus has been shelled with propelled grenades on Sunday. The new violence erupted just hours after the Arab League ultimatum for the Syrian leadership to stop the crackdown on protesters expired.
At least two rocket propelled grenades were fired at the Baath Party headquarters in Damascus early on Sunday. There have been no reports of deaths or injuries, however. According to local media the building was mostly empty at the time of the attack.
“The attack was just before dawn and the building was mostly empty. It seems to have been intended as a message to the regime,” confirmed 'a witness', as cited by Reuters. Source
Posted by Angelo Agathangelou at 9:00 pm


For those unfamiliar, the EIB is the EU's IMF-equivalent and is the largest international non-sovereign lender and borrower. Technically, it is defined as "the European Union's long-term lending institution established in 1958 under the Treaty of Rome. It supports the EU’s priority objectives, especially European integration and the development of economically weak regions."       Source charts etc.
Posted by Angelo Agathangelou at 8:51 pm

Posted by Angelo Agathangelou at 8:01 pm

SGT interviews James Turk, founder and Chairman of GoldMoney.com. We discuss world events including the MF Global collapse, Loss of confidence, JP Morgan and the fall of the Euro Zone. Part 1 of 2.

The SILVER and GOLD Cult:

Obama Failed To Meet His Own Criteria - Immortal Technique

Rap star Immortal Technique says the whole anti-Wall Street movement is rooted in a slow erosion of civil liberties, in which a violation of basic rights sparked the nationwide wave of protest.
“More and more people are realizing just how disenfranchised they are. They are realizing just how little control they have over their own democracy,” he told RT.
The rapper believes that what is happening now in the United States is mirrored in other parts of the world, where people are opposed to the use of centralized power and yet want the system to be more efficient.
“They would almost surrender their freedom to more efficient government – similar to what Russia will have to deal with when they decide whether Putin is going to come back into power,” he said. “There are a lot of people who will think: ‘Oh, functionality over the visage of democracy’ that exists there. So I think the entire world is really dealing with that now: will it be oligarchy, autocratic regime that’s more functional because it’s backed by corporations, or more of a democratic regime that could be hit-and-miss on certain things, may take a hit on jobs.”
Immortal Technique pointed out that people in his country have been forced to face the same kind choice dilemma because the entire idea of what the United States of America is has been perverted.
“The idea of America is to give democracy and freedom to people, but I think that now, more than ever, it’s become about placating people and about pacifying them, so they don’t ask for the amount of freedom that they are guaranteed, almost like when police stop you and then they get offended that you seem to know your rights,” he explained.
“My answer to that has always been: listen, if we were 20,000 deep right then and there, we could have torn downtown to pieces. We didn’t. When you were macing women in the street, we could have ripped the village limb from limb, but we didn’t, because we don’t hate America. We love America and we want it become a better place,” he continued.
Speaking of apparent triggers of the OWS movement and US President Barack Obama’s role in the crisis, the rapper says that so far, Obama has been getting away with many things, because “he is 10 times the campaigner than he is a president.” Now, when his ability to fulfill his own promises has been questioned, the overall discontent of ordinary Americans has increased.

“When [Obama] came in, he came in with the idea that he was going to reform things. And when that was not met, when the criteria that he set up himself for what the reform would entail was not completed – I don’t think that created the Occupy Wall Street movement, but it definitely added fuel to the fire,” Immortal Technique concluded. Source
Posted by Angelo Agathangelou at 2:30 pm

The Complete And Annotated Guide To The European Bank Run. Or?

"Nervous investors around the globe are accelerating their exit from the debt of European governments and banks, increasing the risk of a credit squeeze that could set off a downward spiral. Financial institutions are dumping their vast holdings of European government debt and spurning new bond issues by countries like Spain and Italy... Click here full story ZeroHedge
To summarize: everyone is dumping European paper, except for the ECB and Italian banks, which have no choice and instead have to double down and buy more. In the meantime, the market is going increasingly bidless as liquidity evaporates, confidence has disappeared and virtually everyone now expects a repeat of Lehman brothers. Of course, this means that when the bottom is finally out from the market, the implosion of the Italian banking system, and thus economy, will be instantaneous. And when Italy goes, so goes its $2 trillion+ in sovereign debt, and at that point we will see just how effectively hedged and offloaded the rest of the world is, as contagion shifts from Italy and slowly but surely engulfs the entire world. 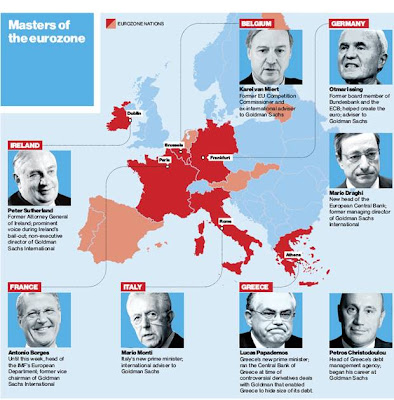 Incidentally, is it really that surprising that Goldman is now doing its best to precipitate a bank run of Europe's major financial institutions by "suddenly" exposing the truth that was there all along? During the great financial crisis of 2008, the one biggest winner from the collapse of Bear and Lehman was none other than the squid. This time around, Goldman has set its sights on Europe and has already made sure that its tentacles will be in firmly in control at all the right places when the collapse comes, as the Independent shows.
And when banks are falling over like houses of cards in the middle of a tornado cluster, and the financial power vacuum is in desperate need to be filled, who will step in once again but... Goldman Sachs.

Posted by Angelo Agathangelou at 11:42 am

Older, Suburban and Struggling, ‘Near Poor’ Startle the Census

WASHINGTON — They drive cars, but seldom new ones. They earn paychecks, but not big ones. Many own homes. Most pay taxes. Half are married, and nearly half live in the suburbs. None are poor, but many describe themselves as barely scraping by.

Down but not quite out, these Americans form a diverse group sometimes called “near poor” and sometimes simply overlooked — and a new count suggests they are far more numerous than previously understood.
When the Census Bureau this month released a new measure of poverty, meant to better count disposable income, it began altering the portrait of national need. Perhaps the most startling differences between the old measure and the new involves data the government has not yet published, showing 51 million people with incomes less than 50 percent above the poverty line. That number of Americans is 76 percent higher than the official account, published in September. All told, that places 100 million people — one in three Americans — either in poverty or in the fretful zone just above it.  Source
Posted by Angelo Agathangelou at 11:35 am

The Lisbon Treaty Versus The U.S. Constitution, Come The Revolution?

An interesting and succinct compare-and-contrast (by MEP Daniel Hannan) of the U.S. Constitution and its European equivalent (Lisbon Treaty) presented with little comment except to note in the last week we have discussed how the Irish view their German masters, how the French/Italians/Spanish will do pretty much anything in order that the Bundesbank will enable ECB monetization, and perhaps more critically the exodus of capital not merely from peripheral European debt markets but from the core also. We suspect the status quo cannot exist much longer (Keynesian Endgame?) and regimes (fiscal/monetary/political) will change as tail risk becomes the only risk.

Submitted by Tyler Durden
Posted by Angelo Agathangelou at 12:03 am