How 'magic' made Greek debt disappear before it joined the euro 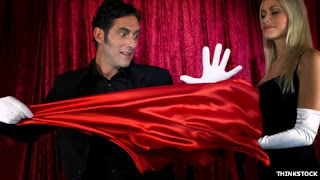 Greece is at the heart of the ongoing eurozone crisis, but is past sleight of hand by Greek statisticians to blame for the country's current financial meltdown?

"We used to call him the magician, because he could make everything disappear. "He made inflation disappear. And then he made the deficit disappear," recalls Greek economist Miranda Xafa.
In the 1990s Miranda Xafa was working for an investment house in London, watching from a distance, as her native Greece got ready for membership of the euro.
Continue reading the main story

She knew - and advised her clients - that the country's economy was not ready, that the statistics its government was publishing did not reflect reality.
"I used to come to Athens from London, with clients of Salomon Brothers," she tells me. "We always saw the head of the statistical agency of Greece, who compiled all the statistics on the debt, the deficit and so on. "He was "the magician" who made inflation and the deficit "disappear".

The new fiscal treaty that 25 of the 27 EU member states agreed to this week is meant to ensure that in future no country has a budget deficit of greater than 3% of GDP.
That same 3% rule was first enshrined in 1992, in the Maastricht Treaty, which led to the creation of the euro in the first place.
But some countries did not respect it. In the case of Greece, not even from the beginning. Greece cooked the books to join the euro in the first place.
Deception becomes transparent

So how did this 'magic' work?


"Take the Greek state railway. It was losing a billion euros a year," Ms Xafa remembers.


"The Greek railway had more employees than passengers. A former minister, Stefanos Manos, had said publicly at the time that it would be cheaper to send everyone by taxi."


The authorities used a neat conjuring trick to make the problem vanish.


"The [railway] company would issue shares that the government would buy. So it was counted not as expenditure, but as a financial transaction."


And it did not appear on the budget balance sheet.
So Greece fulfilled the Maastricht criteria and was admitted to the eurozone on January 1, 2001 - but by 2004 the deception was becoming transparent.
Continue reading the main story

The budget said the deficit was 1.5 per cent. The real shortfall was 8.3 per cent”

Peter DoukasFormer Greek Budget Minister
That year a new, centre-right government was elected. Peter Doukas was appointed budget minister.
"I invited the senior staff of the ministry and asked them to give me details of the budget that had been passed the previous December, two-and-a-half months before we took office.
"I said 'don't worry about persecution or anything, just tell me the true story'."
The difference between the published deficit and the real one was huge.
"[The gap] was about 7% of GDP," Mr Doukas says.
"The budget said the deficit was 1.5%. The real shortfall was 8.3%."
So what did Mr Doukas do about it, given the eurozone's Maastricht treaty rule to keep budget deficits below 3% of GDP?
"I said it's an alarming situation and that we should start chopping down the budget," he recalls.
"But the answer I got at the time was 'listen, we are having the Olympic Games in a few months and we cannot upset the whole population and start having strikes and everything just before the Olympic Games'."
Germany 'sinned'
Instead of reforming public finances, Greece borrowed and borrowed to meet the deficit. Banks queued up to lend.
The markets did not believe there was a risk of default because Greece's currency, the euro, was locked into that of Germany.
So Greece could borrow cheaply, at very low interest rates. It got credit on the same conditions, more or less, as Germany.
The so-called "spreads" - the differences in the rates at which sound and unsound economies could borrow - seemed to have disappeared.
Suddenly, in this one very narrow respect, every country was Germany.
That had not been part of the plan, says Dietrich Von Kyaw, who was Germany's ambassador to the EU in the 1990s.
"We didn't understand or foresee that due to this wonderfully successful-appearing monetary union everybody would get similar conditions as Germany would.
"Now we have these enormous spreads again as they were before monetary union," he says, "but for too long they didn't really come into play."
The markets failed to see the debt mountains that were accumulating. And they underestimated the risk.
Alongside the 3% of GDP budget deficit limit, eurozone members were also obliged to keep their overall debt to less than 60% of GDP.
Continue reading the main story
They had signed up to a mechanism called the Stability and Growth Pact whereby governments could be fined for breaching the limits.
However, France and Germany broke the very rules that they had insisted on for everyone else.
Germany, the great European financial disciplinarian, was struggling because the cost of reunification with the former East Germany had left a big hole in its budget.
Mr Von Kyaw admits that Germany's government "really sinned".
Well, "not a real sin" he adds - Germany just "flexibilised the schedules."
"But when a big country does that, how can you afterwards impose on smaller countries, including Greece, to obey the rules?" he concedes.
And that affected the way Greece viewed the consequences of breaking the rules.
"There was pressure," says Peter Doukas, "but not the sort of thing that is breathing down your neck.
"Everyone who could read the numbers could see that the numbers are off. Even if you allow for constructive accounting, or whatever."
In fact the Stability and Growth Pact was as good as dead by the time Mr Doukas took office in 2004.
So the lesson of history is that the real challenge for the new treaty will come if any of the big nations break the rules in the future.