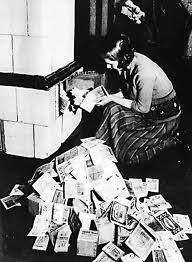 February 2012 – Tug of War
In Berlin June 1922, Alia Schmidt paid 3 German Marks for a really nice loaf of bread. A very quick six months later, the same loaf of bread cost her 700 German Marks. The German decision to print money caused inflation to skyrocket. No one was happy and Mrs. Schmidt had to stop eating bread.
In Tokyo 1994, Makishi Satou paid a whopping 217 Japanese Yen for a delicious McDonalds hamburger. A very long 18 years later, Mr. Satou is still enjoying hamburgers, yet he is only paying 216 Japanese Yen for this very same delicacy.
The Japanese decision to print money resulted in zero inflation. Yet, despite a full belly, Mr. Satou and others are not at all happy with their money printing experience and the subsequent -77% decline in their stock market and the -90% fall in their property market.
Today, future economic historians are lucky enough to both see and experience what will happen as Europe (lead by Germany), Japan, Great Britain and the United States fully engage in the biggest, coordinated, money printing experiment in the history of the Universe. In its simplest form, only three scenarios are possible:
1) Money printing has absolutely no impact on prices rising or falling
2) Money printing results in a return to the 1922 German experience
3) Money printing results in a return to the modern day Japan experience

No worries though - the very competent hands of today’s central bankers, on the surface at least, appear quite confident that their money printing games will successfully engineer a very serene road to prosperity. The mere mention of the probability of scenarios 2 or 3 occurring are casually dismissed as easily as an offering of a third espresso.
However, what should make you a little concerned is that central bankers in both 1922 Germany and 1990 Japan came to the very same conclusion before they commenced their devastating money printing strategies.
...
Tug of War – Inflation vs. Deflation
The 1922 German hyperinflation experience was undoubtedly propelled by printing massive amounts of money. Yet, the Japanese money printing experience has had no impact whatsoever on inflation.
Here we are in 2012, and the World’s four main central banks (USA, Britain, Europe and Japan) continue to print gobs of money. Will the outcome be 1922 Germany or 1990 Japan?
An important point to understand is whether the printed money actually flows through to the economy. In the 1922 German case – yes, it definitely did. The printed money circulated in the economy causing the German Mark to plummet against other currencies which resulted in extreme inflation.
Today, trillions of Dollars, Yen, Euros and Pounds are being printed – yet this new money is certainly not being distributed into the economy. Instead, big banks everywhere are hoarding the newly minted cash for a rainy day. In economic parlance, this is referred to as a “liquidity trap” meaning there is plenty of cash available, however the cash remains trapped and is not being used. This makes today’s situation, perilously closer to the Japanese experience.
Chart 1 ... shows the amount of money not being distributed into the economy by the very big American banks. Once this money is eventually released (via loans) into the economy, the cost of things could rise very quickly – similar to 1922 Germany.

We (and many, many others) have been very critical of the American, European and British central banks. We freely admit that these people all have very good intentions – they truly do want the World’s economy to return to normal.
Yet in our opinion, it is their analysis of the problem that is leading them to make a very big mistake. The central banks fully believe that the World is currently suffering from what they would call – an aggregate demand problem. They believe growth is slow around the World because people and companies are not spending as much money as they normally would.
To many of the big banks, stock brokers and mutual fund sales people, this “aggregate demand problem” sounds no different than any other economic slow down – it’s a part of a normal business cycle. And during a normal business cycle, the solution to encourage people and companies to spend more money has always been 1) lower interest rates and 2) increased government spending. And if the situation becomes untenable as it is today, you can add 3) money printing to the list.
The reason this combination isn’t working today is due to the flawed belief that all of this extra money sloshing around in the economy will naturally entice people and companies to spend their hard earned (and borrowed) money again.
With trillions in freshly printed money, sub 2% growth, widening government deficits and continued bailouts to banks, it has become crystal clear that the central banks’ money printing strategies are not working.
The reason it isn’t working is simply due to the fact that all of this free money being provided to the banks, is not being distributed back into the economy. US and European banks are hoarding this free money and as a result - the transfer mechanism is broken.
For the game of Tug of War - it is this lack of liquidity-flow-through that is hugely supportive of a return to the 1990 Japanese experience. The lack of spending by people and companies in favour of paying down their debt and increasing their savings guarantees sluggish growth at best.
However, it is also critical to know that despite the hoarding of cash by the big banks, the act of money printing by the central banks strongly encourages investors to shun low paying bonds and cash, and instead focus on stocks and commodities.
This by product of money printing has two effects. First, it pushes commodity prices higher, which inevitably causes the prices of some things to also rise higher (when you have a chance, check out the price of gasoline these days).
Secondly, while a higher stock market does help everyone who owns stocks, it just so happens to help the very wealthy a lot more. It is this growing divide which is fueling the bitter tax debate in the US, as well as being the spark for the recent “Occupy Wall Street” movement. Today, you can also include it as the indirect spark which will lead to the eventual social uprising in Greece.
The bottom line is as follows – the combination of the bursting of property prices and the refusal of the big banks to write-off the corresponding bad debt is resulting in a big wave of deflation. We expect this to continue. Yet, we also are mindful enough to know that pockets of inflation will occur in various countries and within various industries.
The real threat of hyper inflation will occur when a major currency collapses. Any country that leaves the Eurozone will undoubtedly see extreme inflation during their transition years. Outside of the Euro-zone, Britain remains at risk due to it being a key center of global finance and at risk should the World’s super-size banks implode once again.
More in the full presentation (pdf)

Posted by Angelo Agathangelou at 11:24 am