people all across Europe demanding their freedom of speech 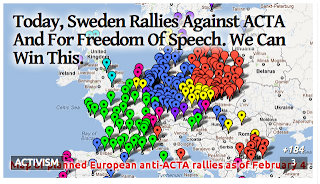 Just look at this map. I’ve never seen anything like it in terms of people all across Europe demanding their freedom of speech and being angry against backroom corporativist deals that steals their most basic civil liberties.

Today, Sweden rallies for freedom of speech, a free net, and firmly against ACTA. Late yesterday, it was announced that Poland is suspending its ratification of ACTA indefinitely. The Slovenian ambassador signing the document (which has no legal effect whatsoever) has publicly apologised and called people to rally in Ljubljana, Slovenia for their rights.

This is not Hollywood versus Silicon Valley, as oldmedia likes to frame it. This is Hollywood versus The People. For decades, they have trained us to think in black and white, in good versus evil fighting for domination of the free world. And now, they’ve gone and put themselves in the role of evil villain.
The copyright cartel thought they were battling Google.
They’re not.
They’re waging war against the people, with the help of the politicians.
And we’re not standing for it. We can’t change the copyright cartel, but we can send a clear message to the politicians that 250 million Europeans sharing and preserving contemporary culture is not a problem. It is a power base of 250 million voters  that will kick you out of office  if you dare so much as touch the net.
And there are visible cracks in the façade, especially seeing Poland falter and the copyright cartels visibly shaken from the SOPA defeat in the US, with the politicians having started to pay attention to what the Internet wants. We can win this.
Today, Sweden rallies. List of rallies below (via Christian Engström, Member of European Parliament):
(The observant will note that less than half of these rallies are marked on the already-impressive map of European rallies. Makes me wonder what the map would look like if all rallies were included.)
Most of Europe will rally next Saturday, on February 11. That’s going to be something, too. Let’s give Europe the best of precursor to those rallies from Sweden that they could possibly get!
As of early morning on February 4, 11,000 people have committed to coming to the Stockholm rally, with another 3,500 maybes. Those are numbers that would overfill the Plattan plaza by a wide margin. I’ll be at the rally in Stockholm, Sweden, and will be taking plenty of imagery and will follow up here.

UPDATE AT 1500: Seeing that this story is #3 on Reddit Front Page at the moment (server is holding… holding…), I want to follow up with the outcome right here: Rally at the Sergels Torg plaza in Stockholm, Sweden. Anna Troberg, leader of the Swedish Pirate Party, speaking (at left) and maybe 1/3 of the crowd.
The turnout was like nothing I’ve seen for a February rally in Sweden. In -20°C, there were well over a thousand people protesting corporate rights over their freedom of speech; normally, you’re lucky getting 50.
Also, there was a very clear recurring theme among the Members of European Parliament speaking, MEPs from three different parties. They all told the story of how software patents had been defeated in Europe, followed by the crucial “amendment 138″ in the Telecoms Package, which aimed to shut people off en masse from the Net. Well, thanks to diligent activists and people on the inside, we managed to get as strong safeguards in place as possible against shutting people off. But the monopoly lobbyists never quit. Now they’re at it again, this time saying that if authorities can’t shut people off en masse due to that “amendment 138″, maybe they can get private corporations – the ISPs – to do it instead through third-party liability forcing certain terms of service and wiretapping.Hence, ACTA.
Fortunately, and this was a consistent message from all Members of European Parliament, we have the blueprint for defeating ACTA. We need to repeat what we did with the software patents and with the Telecoms Package. It takes hard work, it takes tons of activism, but we know exactly what to do and how to do it, and most importantly: we know that we can win.
As the rally concluded, everybody was determined to win this fight, having heard the clear message that it takes work but is perfectly doable.
Source
Posted by Angelo Agathangelou at 3:11 pm