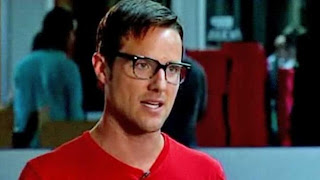 
"Due to the nature of the detention, he was not arrested," she said at a press conference. "During the evaluation we learned we probably needed to take him to a medical facility because of statements he was saying."


Police said they received several calls Thursday at 11:30 a.m. of a man in various stages of undress, running through traffic and screaming.

Police described Russell as "in his underwear." He allegedly took off his underwear at one point, but it was back on by the time officers arrived, said Lt. Brown.
Several people attempted to calm him down, according to police. When officers arrived they said he was cooperative.
"He was no problem for the police department however, during the evaluation we learned that we probably needed to take care of him," said Brown at a press conference. "We determined that medical treatment was a better course of action than arrest."
Russell was taken to a medical center after the incident.
Brown said police could not determine that he formed a criminal intent. There are no criminal charges pending because it looks like this is more of a medical situation.
Invisible Children's CEO Ben Keesey released a statement after 1:40 p.m. on Friday saying:
“Jason Russell was unfortunately hospitalized yesterday suffering from exhaustion, dehydration, and malnutrition. He is now receiving medical care and is focused on getting better. The past two weeks have taken a severe emotional toll on all of us, Jason especially, and that toll manifested itself in an unfortunate incident yesterday. Jason’s passion and his work have done so much to help so many, and we are devastated to see him dealing with this personal health issue. We will always love and support Jason, and we ask that you give his entire family privacy during this difficult time.”
Russell is one of the the founders responsible for the "Kony 2012" video that recently went viral. He is described on the organization's website as a co-founder and "our grand storyteller and dreamer." Russell is also described as a Christian and father to two children who wants to have nine more children with his wife he calls his "best friend for over 23 years."
The video "Kony 2012" calls for the capture of the Ugandan LRA leader whose fighting tactic involves kidnapping and torturing the country's innocent children.
Russell spoke with NBCSanDiego explaining how the movement was exploding at the organization's headquarters in San Diego.
"There are hundreds and thousands of propaganda - posters, stickers, buttons, t-shirts, that we are putting in boxes and are shipping all over the world," Russell said in a March 8 interview.

Source
Posted by Angelo Agathangelou at 12:01 am