Debt crisis: Europe's democracies must not subcontract their destiny to the Bundebank 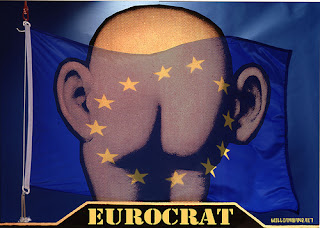 Italy must guarantee 22pc of the bail-out funds, even though it cannot raise money itself at a sustainable rate. You could hardly design a surer way to pull Italy into the fire.
Citigroup warned over the weekend that Italy’s economy will shrink by 2.5pc this year and another 2pc next year as the fiscal squeeze starts in earnest, with grim implications for debt dynamics. Public debt will jump from 121pc of GDP to 137pc by 2014.
“The situation could rapidly become critical, because the country is highly vulnerable if the sovereign debt crisis persists or intensifies. A significant further rise in yields would deepen and extend the recession and accelerate the rise in the debt/GDP ratio, triggering a worsening vicious circle. We expect that Italy will have to request help,” it said.
The world is uncomfortably close to a 1931 moment. Italy’s public debt is the world’s third largest after the US and Japan at €1.9 trillion. There is no margin for political error.
The EU machinery (EFSF/ESM) exists largely on paper, a €500bn declaration of intent. It had trouble raising trivial sums last year to fund Irish and Portuguese loan tranches -- understandably so, since the fund is a transparent attempt to evade the imperative of Eurobonds and EMU debt pooling.
China’s sovereign wealth fund said last week that it was withdrawing from Europe’s debt markets, fearing a collapse of the euro. Investors are willing to pay zero rates for German sovereign debt, or near zero for French debt, sure that these nations will emerge from the rubble come what may. They patently do not want mangled guarantees from an EMU club at risk of disintegration. Sovereignty is all that counts now.
There are many layers of blame for what has happened, but the German policy elites and the European Central Bank are entirely responsible for the latest catastrophic turn of events. They pushed southern Europe over a cliff.
Misjudged monetary tightening by the ECB last year in response to an oil supply shock incubated the double-dip slump now becoming apparent.
All key measures of the money supply in Spain and Italy went into violent contraction in the second half of 2011, with predictable consequences a few months later. The shock was so severe that money contraction had even spread to much of the core by the early winter.
This occurred at a time when banks -- under threat of nationalization -- were slashing balance sheets to meet the EU’s demand for core Tier I capital ratios of 9pc.
As we now know from the Bank for International Settlements, Europe’s banks went into overkill. They accounted for most of the $800bn fall in cross-border lending in the fourth quarter of 2011. By all means impose higher capital ratios, but not in a depression and not by slashing loans.
Just to ensure that every lever of the EU policy machinery was set on maximum destruction, Germany imposed scorched-earth fiscal austerity as well. Spain must tighten by 4.5pc of GDP this year though unemployment has surged to 24.4pc -- from 7.9pc in 2008 -- and the public sector is not unduly large. Italy must tighten 3.5pc this year, though it is near primary budget surplus. There is no credible economic theory to justify this pace of tightening. It is beyond any known therapeutic dose.
We hear much talk from the ECB over the need to separate monetary and fiscal policy. Yet the ECB itself was the enforcer of fiscal cuts in southern Europe, dictating terms to Spanish and Italian leaders in secret letters in August 2011. Frankfurt switched bond purchases on and off to secure compliance. Italy’s Silvio Berlusconi was toppled by an ECB-orchestrated Putsch after he dragged his feet.
Some separation. One might suggest that bureaucrats should not take it upon themselves to force sovereign democracies to their knees. The sorry episode cries out for hearings in the parliaments of Europe’s historic nation states.
We will never know whether Italy and Spain could have regained viability within monetary union if the policy settings for the whole region had been less destructive.
It would never have been easy for Italy to claw back 20pc to 30pc in lost labour competitiveness against an austere Germany. Spain has long been a borderline case with a glut of one million homes slowly throttling the banking system. All we know is the current policy is hopeless.
The weekend rescue package offers no fundamental relief. It is a €100bn loan package to the sovereign state of Spain, not a recapitalisation of banks. It raises Spain’s public debt by up to 10pc of GDP. There is no mutualisation of EMU debts, no move towards fiscal union. Nothing has changed. 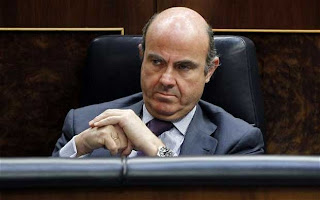 Spanish finance minister Luis de Guindos said the package was big enough to eliminate “all residue of doubt”. As a former Lehman brothers man he must know that JP Morgan has already predicted that Spain will need €350bn, and that RBS says it may “morph“ to €450bn.
Existing holders of Spanish debt will be pushed further down the credit ladder with each transfer of EU money to Spain.
Europe will now pay the price for what it did in Greece, where EU bodies concentrated all loses on pension funds, sovereign wealth funds, life insurers, and others who had stood behind Greece until the bitter end. They suffered 75pc haircuts as a reward for loyalty.
Who is going to fund the Spanish state through two more years of EMU-induced depression and rising political protest after watching that Greek drama? Foreign holdings of Spanish debt plummeted from 50pc of the total to 37pc in the first quarter, even before the latest spasm of the crisis.
Spanish banks have been lone buyers, borrowing from the ECB to bail out the same state that is in turn bailing them out. They are running out of collateral. Debt downgrades by the rating agencies may bring this collateral shortage to a head very soon.
The weekend deal is a fresh evasion by EU leaders. Another loan package will be inflicted on another country that cannot afford more debt, though the stakes are higher this time. 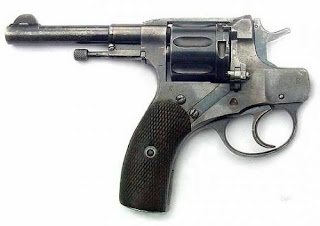 Europe’s democracies can stop this destructive course before it is too late. They do not have to subcontract their destiny to the Bundesbank. The broad Latin bloc commands the majority votes to compel the ECB to act as lender of last resort and reverse monetary contraction. They should use that power.
If such a confrontation causes Germany and its satellites to storm out of EMU in a huff, that too is a solution of sorts. Monetary asphyxiation would end. The Latin euro would weaken to equilibrium levels. Capital would flow back into southern Europe once the boil had been lanced.

Just do it. Call the German bluff. One bound and you are free.
Source
Posted by Angelo Agathangelou at 6:09 pm