The former head of the Vatican Bank has become the Papacy’s Enemy Number One, after police discovered a trove of documents exposing financial misdeeds in the Holy See. The banker now reportedly fears for his life.

Earlier this week police conducted a dawn raid on the house and office of Ettore Gotti Tedeschi. Investigators say they were looking for evidence in a graft case against defense and aerospace firm Finmeccanica, which was formerly run by a close friend of Gotti Tedeschi.
Instead, as it turns out, police stumbled upon an entirely different find. 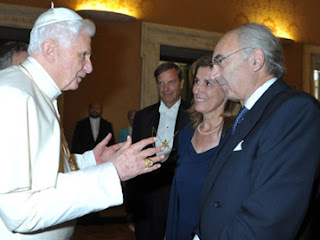 They discovered 47 binders containing private communication exposing the opaque inner workings of the secretive Holy See.  They included financial documents, details of money transfers and confidential internal reports – all prepared by Gotti Tedeschi to build a convincing expose of corruption in the Vatican.

A renowned economics professor and head of the Italian branch of the giant Bank of Santander Gotti Tedeschi took what turned out to be a poisoned chalice of a job in 2009, when he became the President of the Institute for Works of Religion, the formal name for the Bank of Vatican. His brief was formidable – to introduce transparency to a lucrative enterprise that had become a byword for money-laundering and corruption.

After a tumultuous three years marked by in-fighting and public scandals, Gotti Tedeschi was unanimously dismissed from his post by a board of Vatican officials in May.
“I have paid for my transparency” the indignant banker said to the media, as he stormed off even before his dismissal hearing was over.
The confidential minutes of the stormy meeting obtained by Reuters showed the banker accused of "progressively erratic personal behavior" and "exhibiting lack of prudence and accuracy in comments regarding the Institute".
But there may have been other reasons.
Aware that his crusade against corruption was failing, Gotti Tedeschi probably began to leak important documents to the media.
The drip-drip of damaging revelations (alongside more personal ones presumably passed onto the media by the Pope’s own butler) has been dubbed 'Vatileaks', and has captivated Italy in recent months.
At the hearing, the board that dismissed the banker also indirectly accused Gotti Tedeschi of being behind some of the leaks, pointing to his "Failure to provide any formal explanation for the dissemination of documents last known to be in the president's possession."
While the leaks were a weapon with which to attack his enemies, Gotti Tedeschi was also preparing a last resort option if the battle was lost – a ‘suicide belt’ that would blow the lid off Vatican.
Several months ago, he reportedly told his friends that he began collecting an exhaustive dossier “in case something happened to him.”
It is this dossier that the police have now apparently discovered.
The Vatican is barely concealing its panic – and wants the folders handed back unopened.
“We have faith that the prosecutors and Italian judicial system will respect our sovereignty—recognized internationally—with regard to these documents,” said an official statement.
But there is little chance the Papacy will get its way this time.
Italian prosecutors have frequently been at loggerheads with the Vatican and have accused it of using its sovereignty as a shield against proper regulation.
If the documents do spark a legal firestorm, Ettore Gotti Tedeschi is sure to be a key witness in any trial. A former employee against his employers, and a conservative Catholic pitched against the Vatican itself.
Allegedly, Gotti Tedeschi keeps a list of personal enemies in the Vatican – people who he had felt would stop at nothing to prevent him from reforming the Institute for Works of Religion. His friends have told the media he is shaken and scared.
Police are now considering putting the whistle-blowing banker under armed protection.
Source

(WMR)—WMR’s well-placed sources in Rome report that the current scandal involving the disclosure of sensitive Vatican documents to “VatiLeaks,” is largely the work of White House Office of Information and Regulatory Affairs chief Cass Sunstein. The effort by Sunstein, who has been dubbed President Obama’s “information czar,” is to weaken the Vatican and subject its inner workings to greater transparency.
WMR has learned that some three weeks ago, Sunstein stated to his inner circle, “After the Arab Spring, we will have the Vatican Spring.”
According to our sources in the Vatican, the arrest of papal butler Paolo Gabriele by Vatican authorities for allegedly leaking the documents is a diversion. “When have you last heard the butler did it?” one Vatican insider told WMR.
The Vatican is being subjected to a full-scale assault by the same nexus of George Soros-funded non-governmental organizations, Sunstein’s “cognitive infiltration” operatives, and controlled media elements that helped bring about “themed revolutions” and the downfall of governments in Serbia, Ukraine, Georgia, Tunisia, Egypt, and other countries.
The controversy surrounding the Vatican Bank, formally known as the Institute of Works of Religion (IOR), began when J.P. Morgan Chase closed an IOR account at its branch in Milan, citing a lack of transparency. That was followed by the firing by the IOR’s supervisory board of Ettore Gotti Tedeschi, a former Banco Santander executive, for pushing for more transparency for the Vatican Bank and compliance with the EU’s laws on financial transparency. However, the J.P. Morgan Chase action was, according to our sources, prompted by Sunstein and his colleagues at the Treasury and State Departments. On March 7, the State Department, for the first time, added the Holy See to its list of money-laundering nations. That move triggered a wave of financial pressure on the IOR and Vatican, which was aided and abetted by Tedeschi. The IOR board then ousted Tedeschi.
WMR has been told that the Vatican came under pressure after it had backed the initiatives of the BRICS bloc of nations—Brazil, Russia, India, China, and South Africa—to seek a realignment of the world’s financial system to provide greater influence for the emerging economies of BRICS and a reorientation of financial control away from London, Frankfurt, New York, and Washington. The Vatican’s policy placed it on the list of de facto enemies of Soros, the Rothschild baking cartel, the European Central Bank, and the World Bank/International Monetary Fund.
There has been speculation about the role of the IOR’s secretary, Carl Anderson, in the push-back by the Vatican against the Obama White House’s Vatican Spring operations. Anderson is the head of the Knights of Columbus and he served as an official in the Reagan White House and as an aide for the late North Carolina Republican senator Jesse Helms. In the 1980s, the IOR and the partly-Vatican owned Banco Ambrosiano were used by the CIA to covertly fund a number of anti-communist operations around the world, including the contras in Nicaragua who had the strong support of Reagan and Helms.
In 1982, Banco Ambrosiano chief Roberto Calvi was found hanging from Blackfriars Bridge in London. Calvi was a member of the powerful Masonic Propaganda Due (P2) lodge in Italy and after his firing it was feared by P2 that he might reveal the nature of secret payments by the lodge involving the Vatican and the bank. P2 members called themselves “frati neri,” Italian for “black friars.” There is strong evidence that Calvi was murdered by P2 agents.
In 1983, Emanuela Orlandi, a 16-year old student and Vatican citizen, was kidnapped, used for sex parties, and was murdered. Orlandi’s father, Ercole Orlandi, was an official of the IOR who had knowledge of the P2 and the Banco Ambrosiano covert payments scandal. WMR has learned that the same operatives who murdered Calvi in London also murdered Emanuela after her father refused to provide P2 with requested information. The P2 agents held Emanuela and may have sexually assualted her but after Emanuela’s father refsued to cooperate, the young girl was murdered. The exhumation of the grave of mafia gangster Enrico De Pedis this past May 12 in a search for clues about Emanuela’s murderers yielded nothing. Howveer, the exhumation provided a backdrop for Sunstein, Soros, Rupert Murdoch, and neo-conservative media outlets to run headlines, such as “Emanuela Orlandi Kidnapped for Vatican Sex Parties.” The recycling of the Orlandi “cold case” murder was timed to put additional pressure on the Vatican.
The White House-initiated Vatican Spring has opened up a schism within the Vatican hierarchy, similar to what has happened in China and Russia as a result of other White House/Soros political undermining tactics. Pope Benedict XVI is now isolated and the Vatican’s powerful number two official, Secretary of State Cardinal Tarcisio Bertone, is circling the wagons to defend the Holy See against the Vatican Spring operations. Tedeschi and his allies, who reportedly include former Vatican Secretary General Archbishop Carlo Maria Vigano, now the Apostolic Nuncio in Washington, DC, are arrayed against the traditional Vatican hierachy, particularly Bertone. Vigano replaced Cardinal Pietro Sambi, the former Apostolic Nuncio to Israel and Palestine, who was a fierce opponent of Israel’s seizure of Christian church property in Jerusalem and the West Bank. Sambi died after routine surgery in Baltimore that later resulted in lung complications. A source close to Sambi said he believes that Sambi’s surgery involved “medically-assisted homicide.”
Source
Posted by Angelo Agathangelou at 10:04 am