U.S. Cops have a new game to play

For quite a while now the police have had a new toy to play with, the taser. Now they have turned it into a new game called “Let’s see who can tazer the most people to get them to comply.”
Editor’s note: RT has also covered this horrific incident and many other insane instances of police using tasers for fun including: “Driver in diabetic shock killed by cops with pepper spray and Tasers”, “NY cops break into Marine vet’s home and Taser him before shooting him to death”, and “Cop Tasers a waiter for fun.” However, even more disturbing is the following article, “Tasers have killed at least 500 Americans.” 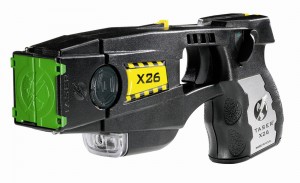 The latest victim of this game was Chicago resident, Tiffany Rent, a 30-year-old pregnant woman in her 8th month of her pregnancy.
What was her crime? Was it armed robbery, terrorism, or drunk and disorderly?
No, it was parking in a handicapped spot at Walgreens. The police report says that after Rent got a ticket she tore it up and threw it at the police officer. In the course of the altercation a taser was discharged.
Rent and her boyfriend Joseph Hobbs were charged with resisting arrest and simple assault. All this took place in front of Rent’s two children, her 9 year old son and her 3 year old daughter who were in the car at the time.


This isn’t the first time that police have tased someone; in fact it has become an all too frequent occurrence. And it’s not going to stop anytime soon.
A federal court of appeals ruled that three Seattle police officers did not use excessive force when they tased a pregnant woman 3 times for failing to sign a speeding ticket. In Washington failure to sign was a non-arrestable misdemeanor. I guess using pain to force compliance is legal.
Police officers using, or threatening to inflict, pain just because the individual they encounter disagrees is the Nazi way to control the populace. What will be next, water boarding?
Local, state and federal governments have gotten out of control. They look at the people as cattle, to be controlled and herded into pens for compliance.
You must be observed at all times and told what to do and where to do it. If you fail to comply you will be tased and detained.
Barack Obama said during his 2008 campaign that he wanted a civilian force as well armed and funded as the military. What he failed to say is that he wanted it to be used on the American people. It looks like he got his wish.
The use of the taser, beatings, detentions, forced inoculations and the rest will not stop unless the people rise up in protest against these actions.
Your local politicians must be made aware that you will not tolerate this type of behavior from any of your local law enforcement personnel and that they should not be allowed to carry tasers. Tell your politicians that if they fail to comply you will replace them in the next election.
The TSA was the first step in the enslavement of the American people. It has now moved to local government. The next phase of your enslavement is about to become reality. Armed drones will soon be coming to your neighborhood.
Welcome to 1984 where surveillance is everywhere and the real terrorist is your government.
Edited by Madison Ruppert

Source
Posted by Angelo Agathangelou at 9:21 am