A Critique of the Methodology of Mises & Rothbard - azizonomics 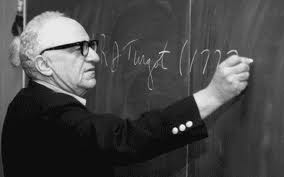 Aziz: I find myself in the middle of a huge blowup between Max Keiser and Tom Woods over Mises, Menger and Austrian economics and feel that this is an opportune moment to express some doubts I have regarding contemporary Austrian methodology.
I am to some extent an Austrian, on three counts.
First, I subscribe to the notion that value is subjective; that goods’ and services’ values differ according to different individuals because they serve various uses to various users, and that value is entirely in the eye of the beholder.
Second, I subscribe to the notion that free markets succeed because of the sensitive price feedback mechanism that allocates resources according to the real underlying shape of supply and demand and conversely the successful long-term allocation of labour, capital and resources by a central planner is impossible (or extremely unlikely), because of the lack of a market feedback mechanism.
Third, I subscribe to the notion that human thought is neither linear nor rational, and the sphere of human behaviour is complicated and multi-dimensional, and that attempts to model it using linear, mechanistic methods will in the long run tend to fail.

It is not, then, the overall drift of Misesean-Rothbardian economics that I find problematic — indeed, I often find myself drawing similar conclusions by different means — but rather the methodology.
I reached my views — some of which new evidence will eventually wash away — through a lot of theorising mixed with much careful observation and consideration of case studies, historical examples and all sorts of real world data. I love data; and one of the things that attracted me toward thinking and writing about economics is the beautiful superabundant growth of new data opened up to the world by computers and the internet. No, it is not universal or complete, and therefore building a perfect predictive model is not possible, but that is not the point. If I want to know how the corn price in the USA moved during the first half of the twentieth century, the data is accessible. If I want to know the rate of GDP growth in Ghana in 2009, the data is accessible. If I want to know the crime rate in France, the data is accessible.
Miseseans choose to reach their conclusions not from data, but instead from praxeology; pure deduction and logic.
This is quite unlike the early Austrians like Menger who mainly used a mixture of deductionism and data.
According to Rothbard:

Praxeology rests on the fundamental axiom that individual human beings act, that is, on the primordial fact that individuals engage in conscious actions toward chosen goals. This concept of action contrasts to purely reflexive, or knee-jerk, behavior, which is not directed toward goals. The praxeological method spins out by verbal deduction the logical implications of that primordial fact. In short, praxeological economics is the structure of logical implications of the fact that individuals act.

Our statements and propositions are not derived from experience. They are not subject to verification or falsification on the ground of experience and facts.

This is completely wrongheaded. All human thought and action is derived from experience; Mises’ ideas were filtered from his life, filtered from his experience. That is an empirical fact for Mises lived, Mises breathed, Mises experienced, Mises thought. Nothing Mises or his fellow praxeologists have written can be independent of that — it was all ultimately derived from human experience. And considering the Austrian focus on subjectivity it is bizarre that Mises and his followers’ economic paradigm is wrapped around the elimination of experience and subjectivity from economic thought.
If, as I often do, I produce a deductive hypothesis — for instance, that the end of Bretton Woods might produce soaring income inequality — it is essential that I refer to data to show whether or not my hypothesis is accurate. If I make a deductive prediction about the future, it is essential that I refer to data to determine whether or not my prediction has been correct.
Exposing a hypothesis to the light of evidence augments its strong parts and washes away its weaker ones. When the evidence changes, I change my opinion irrespective of what my deductions led me to believe or what axioms those deductions were based upon. Why reach the conclusion that central planning can induce civilisational failure through pure logic when the historical examples of Mao’s China and Stalin’s Russia and Diocletian’s Rome illustrate this in gory detail?
This is elementary stuff. Deduction is important — indeed, it is a critical part of forming a hypothesis — but deductions are confirmed and denied not by logic, but by the shape of the evidence. In rejecting modelling — which has produced fallacious work like DSGE and RBCT, but also some relatively successful models like those of Minsky and Keen — praxeologists have made the mistake of rejecting empiricism entirely. This has confined their methods to a grainier simulation; that of their own verbal logic.
It is not necessary to define a framework through mathematical models in order to practice empirical economics. Keynes was cited by Rothbard in support of the notion that economics should not be fixated on mathematical models:

It is a great fault of symbolic pseudo-mathematical methods of formalizing a system of economic analysis, that they expressly assume strict independence between the factors involved and lose
all their cogency and authority if this hypothesis is disallowed: whereas, in ordinary discourse, where we are not blindly manipulating but know all the time what we are doing and what the words mean, we can keep “at the back of our heads” the necessary reserves and qualifications and the adjustments which we have to make later on, in a way in which we cannot keep complicated partial differentials “at the back” of several pages of algebra which assume that they all vanish. Too large a proportion of recent “mathematical” economics are mere concoctions, as
imprecise as the initial assumptions they rest on, which allow the author to lose sight of the complexities and interdependencies of the real world in a maze of pretentious and unhelpful symbols.

And I agree. But nowhere did any of the figures cited by Rothbard; not Keynes, nor Wild, nor Frola, nor Menger endorse a wholly deductionist framework. All of these theorists wanted to work with reality, not play with logic. Create a theory; test; refine; test; refine; etc.

Praxeologists claim that praxeology does not make predictions about the future, and that any predictions made by praxeologists are not praxeological predictions, but instead are being made in a praxeologist’s capacity as an economic historian. But this is a moot point; all predictions about the future are deductive. Unless predictions are being made using an alien framework (e.g. a neoclassical or Keynesian model) what else is the praxeologist using but the verbal and deductive methodology of praxeology?
It has been the predictive success of contemporary Austrian economists — at least in identifying general trends often ignored by the mainstream — that has drawn young minds toward Misesean-Rothbardian economics.
Of those economists who predicted the 2008 crisis, a significant number were Austrians:

Yet Miseseans including Peter Schiff damaged their hard-earned credibility with a series of failed predictions of imminent interest rate spikes and hyperinflation of the dollar by 2010.
That is not to say that interest rate spikes and high inflation cannot emerge further down the line. But these predictive failures were symptomatic of deduction-oriented reasoning; Miseseans who forewarned of imminent hyperinflation over-focused on their deduction that a tripling of the monetary base would produce huge inflation, while ignoring the empirical reality of Japan, where a huge post-housing-bubble expansion of the monetary base produced no such huge inflation. Reality is often far, far, far more complex than either mathematical models or verbal logic anticipates.
Like all sciences, economics should be driven by data. For if we are not driven by data than we are just daydreaming.
As Menger — the Father of Austrianism, who favoured a mixture of deductive and empirical methods — noted:

The merits of a theory always depends on the extent to which it succeeds in determining the true factors (those that correspond to real life) constituting the economic phenomena and the laws according to which the complex phenomena of political economy result from the simple elements.

Praxeology is leading Austrian economics down a dead end.
Austrianism would do well to return to its root — Menger, not Mises.