"So You Say You Want A Revolution" - The Real New Normal 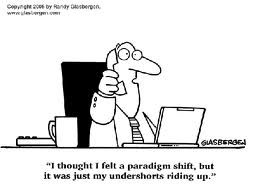 Submitted by Tyler Durden: This month marks the 50th anniversary of Thomas Kuhn’s The Structure of Scientific Revolutions, one of the landmark philosophical texts of the last century.  The central thesis of the book is that science advances in fits and starts, clustered around the advent of new 'Paradigms' - a term that Kuhn introduced in the book and much of academia subsequently coopted as their own.  This was a novel thought for the times, since the conventional philosophy held that science advanced through the ages in plodding but rigorous steps.  Kuhn’s observation about science is equally applicable to capital markets, for the range of 'Paradigm shifts' underway goes a long way to explaining everything from why companies refuse to invest to why earnings multiples on U.S. stocks remain so low.  Today, in celebration of Kuhn’s opus, ConvergEx's Nick Colas offers up a list of the ‘Top 10 Paradigm Shifts’ currently underway.

Nick Colas, ConvergEx: So You Say You Want A Revolution
To those of us whose careers can now belly up to the bar and have a drink, the last +21 years of life interpreting the capital markets have seen remarkable change.  I managed to analyze the automotive sector for well over a decade in the 1990s/early 2000s without ever reading a speech given by a Federal Reserve chairman.  Now I review everything Chairman Bernanke says, no matter how trivial.  I was indoctrinated into the school of thought that U.S. equities return 8-11% annually, on average.  Now I blush at that laughable simplicity of the claim.  And many, many years ago, single stock research ruled the intellectual roost at virtually every asset manager with two nickels to rub together.  Now, between high correlations and supercomputers, most daily stock trading has little-to-no linkage to fundamental analysis.
One of the most influential books of the 20th century – Thomas Kuhn’s The Structure of Scientific Revolutions – celebrates its 50th anniversary this month, and there is much in this landmark text that helps explain how change occurs in complex human systems.  Since its initial publication, the book has become one of the most widely cited academic works in modern history and sold over 1 million copies.  Even 50 years on, Amazon currently has the anniversary edition listed at #12 in books about the philosophy of science and math and in the top 1,500 of all books currently for sale on the site.  I first read “Structure” in business school in an introductory strategy class and still have my dog eared copy on my bookshelf at home.
The message of Kuhn’s opus is simple: mankind’s scientific knowledge advances in fits and starts, centered on rival theories of how the world works.  These belief structures, which he called ‘Paradigms,” start life when existing theoretical models have run their course and no longer yield new insights. They are, at first, actually inferior at explaining the world around us versus their aged counterparts.  But with time, adherents to the new paradigm refine it to the point where it succeeds the old models.  Most activities that pass for “Science” actually do nothing more than try to prove the currently accepted “Paradigm.”  For mankind’s knowledge to advance materially, some renegade scientist must propose a “Paradigm shift” – a set of novel ideas which attempt to explain where the old model gets things wrong.  He or she may be initially shunned by the adherents of the old paradigm, but eventually they gather up followers interested in doing the research to prove the new models correct.
For me, this description also neatly describes how prevailing investment themes develop, mature, and then die in capital markets.  Granted, economics and stock market analysis are not as rigorously scientific as physics (Kuhn’s specialty), chemistry or other natural sciences.  The structure of how ideas become “Paradigms” is largely the same, however – as well as how those same notions eventually die off and get replaced by new ones.  In fact, what strikes me as most telling about the current investment climate is just how many “Paradigms” are currently in flux.
Here’s a quick “Top 10” style list of ideas which are undergoing noticeable change:
The bottom line here is that a lot has changed in 20 years or so.  And it’s not just a few “Big” concepts; it’s practically everything from what makes for winning corporate strategy to how investors of all stripes consider basic asset allocation.  In the language of Kuhn’s opus, there are many “Paradigm shifts” all occurring at once.  That doesn’t necessary spell disaster.  But it does mean that a whole range of “Old” ideas are heading out the door as an equally expansive set of new paradigms are moving in and setting up shop.  Remember that new paradigms don’t often have as much to them as the old ideas they replace.  They are often actually inferior.  Over time they get their bearings, yes.  But the transition is rough.

Source
Posted by Angelo Agathangelou at 9:09 am