Germany’s shipping industry faces a wave of bankruptcies over coming months as funding dries up and deepening economic woes across the world cause a sharp contraction in container trade.

By Ambrose Evans-Pritchard: Over 100 German ship funds have already shut down as the long-simmering crisis in global container shipping finally comes to a head. A further 800 funds are threatened with insolvency, according to consultants TPW in Hamburg.
They are not alone. Britain’s oldest shipowner, Stephenson Clark, dating back to 1730, went into liquidation last week, closing the final chapter of Britain’s coal trade and the industrial revolution.
It cited “incredibly depressed” vessel rates. The firm over-invested in the boom four years ago, betting too much on the China syndrome.
Germany is the superpower of container shipping, controlling almost 40pc of the world market. The Germans also misread the cycle and have been struggling to cope ever since with a legacy of debt and a glut of ships. Now everything is going wrong at once. 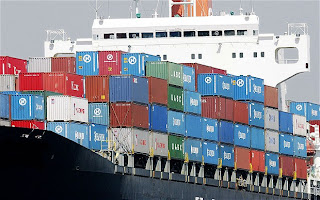 Container volumes arriving at European ports plunged in June, dashing expectations of a summer rebound. Imports fell 7.5pc from North America and 9pc from Asia. Flows into the Mediterranean region crashed by 16pc, reflecting the violence of the recession in Greece, Italy, Spain, and Portugal.
Buckling trade is the coup de grace for countless shippers still clinging on by their finger tips. “The market is barely paying above operating cost. If you are loaded with debt, you are in trouble,” said Martin Smith from ship operators Norddeutsche Vermögen in Hamburg.

It is much same story in the Pacific region where Danish shipper Maersk said that it is losing over $200 for every container on the Qingdao-Melbourne route. But what the Germans face is the double-whammy of a funding squeeze.
“If you don’t have a line of credit already, nobody is going to give you one. We’re suffering a liquidity crisis, and its almost impossible for single vessel owners,” said Mr Smith.
Commerzbank – the world’s second-biggest provider of ship finance, and reluctant owner of a flotilla of foreclosed ships – said it is shutting down its €20bn (£15.7bn) ship funding operations entirely to “minimise risk and capital lock-up” under tougher EU banking rules.
“The essential reasons are the high capital and rising liquidity requirements under Basel III,” it said. Commerzbank’s move is the latest evidence that forcing banks to raise capital ratios too fast – and too soon – can choke lending to the real economy. Most of the 20 top banks for the shipping industry have stopped all funding.
“Shipping is the biggest casualty of the new regulations. All the banks are reducing their portfolios, using any breach of covenant to get out of contracts. The second-hand ship market has broken down,” said Mr Smith. Both bulk ships and tankers are trading at lower levels today than during the worst moments of the 2008-09 crisis.
Clarkson’s ClarkSea Index for maritime freight rates has halved since mid-2010, and fallen by 80pc since 2008. This includes the wildly volatile Baltic Dry Index for bulk freight, which has crashed by 90pc to post-Lehman depths. Container rates have held up better but small “feeder” ships are mostly losing money. High oil costs are eating up margins.
“It’s familiar territory,” said Clarkson’s Shipping Intelligence Weekly. “As pressure builds, owners are forced to lay up ships and, with no cash flow, they can’t pay their bankers. As their ships are forced on to the market, prices spiral down. Well-heeled companies snap up the good ones and the rest go for scrap.”
The odd twist is that Greek shippers are the ones quietly snapping up bargains from distressed German companies “The Greeks are sitting on a pile of cash. They are in their own special cocoon completely removed from Greece’s political troubles,” said Dimitris Morochartzis from Lloyd’s List Intelligence.
“They played their cards really well during the boom, selling ships for a profit at the top of cycle. They are now buying them back for a fraction of the price,” he said.
The Greek group Costamare has spent $1.2bn (£764m) since early 2011 expanding its fleet. Last month it bought the Stadt Lubeck from an insolvent German group for $11.3m.
The striking feature of the deal was that Hypovereinsbank provided 100pc financing, a privilege denied to German shippers. “They like their Greek customers more than us,” said one German shipper, quoted by Lloyd’s List.
Giorgos Xiradakis from consultants XRTC said Greek firms are teaming up with Chinese banks. Chinese premier Wen Jiabao pledged $5bn in loans to the Greek shipping industry two years ago, part of a twin-headed plan to gain a stronger foothold in the EU market and to provide vendor financing for the Yangtze shipbuilding industry – currently in dire straits.
German shipping experts say that two-thirds of the country’s marine fleet is in financial distress. If the crisis drags on much longer, the Greeks may leapfrog ahead to become world leaders in container shipping. The irony of prudent Greeks cleaning up after a reckless debt spree by the Germans is lost on nobody.

Posted by Angelo Agathangelou at 9:25 am