by Mike Masnick: Late last week Charlie Ergen and the folks at Dish Networks presented the TV networks with a bit of a conundrum. You see, the company decided to actually give consumers what they want: setting up a special DVR system, called Auto Hop, that would let viewers not just automatically DVR the entire primetime lineup of all the major networks with the single push of a button -- but also to automatically skip commercials when watching the playback, as long as it wasn't the same day the shows aired. This is something that consumers clearly want -- which Dish execs were pretty upfront about:

But, of course, who is a consumer in this market gets complicated pretty fast. The TV networks, of course, make a fair bit of money from advertising on these shows, and they're not happy about any idea that means people might skip commercials. Those of you who have been around for a bit may recall a few relevant stories. First, there was Jamie Kellner, the former chair of Turner Broadcast Systems, who once claimed that walking away from your TV while commercials aired was a form of theft. Then, of course, there was the famous ReplayTV case. If you don't recall, ReplayTV was an early competitor to TiVo, and in many regards a better product. Among its features, it took an already considered legal feature from VCRs called "commercial skip" and added it to DVRs. The industry sued, in large part because of this feature, which they considered to be breaking the law.

Read more »
Posted by Angelo Agathangelou at 11:06 pm 3 comments: Links to this post

Has The Greek Bank Run Started?

Submitted by Tyler Durden:
While the long-term decline in bank deposits over the past 3 years has been well documented both on Zero Hedge and elsewhere, it is the most recent, acute post-election phase that has not gotten much coverage. Minutes ago Bloomberg sent out a notice that things in Greece may be on the verge of the final collapse. From Bloomberg: "Anxious Greeks have withdrawn as much as 700 million euros ($893 million) from the nation’s banks since the inconclusive May 6 election, President Karolos Papoulias told party leaders yesterday, according to a transcript of the meeting posted on the presidency’s website today. Papoulias said he got the information from the head of the Bank of Greece, the central bank, George Provopoulos, according to the transcript." While this was likely a negotiation talking point to facilitate the formation of the government, the reality as we now know is that there has been NO government formed, which now means that the bank run will only get worse. Needless to say, a Greek banking system which is now virtually shut out of any extrenal funding except for the ELA, where it has a few billions euros in access left, will be unable to deal with hundreds of millions in deposit outflows.
This may be the beginning of the end for Greece, just as Buiter and later JPM warned over the weekend.
And courtesy of Russian_market, here is a picture of the first Greek ATM lines:

Posted by Angelo Agathangelou at 9:02 pm No comments: Links to this post

Dissecting Jamie Dimon's 'egregious, terrible mistake,' the possible insider trading around those so-called mistake and what the Leveson Inquiry may tell us about the SEC's Mary Schapiro's 'focus' on these oh so egregious mistakes. In the second half of the show Max talks to Nomi Prins, a former senior executive at Goldman Sachs and Bear Stearns, about the problems at JP Morgan's London trading desk. Source
Posted by Angelo Agathangelou at 5:23 pm No comments: Links to this post

The 5th episode of The World Tomorrow takes us to the very heart of America's War on Terror: Guantanamo Bay. In the episode Julian Assange speaks with Moazzam Begg - former Gitmo prisoner and a rights campaigner fighting for those still trapped behind the wire, and Asim Qureshi - former corporate lawyer, whose human rights organization Cageprisoners Ltd exists solely to raise awareness of the plight of prisoners who remain in Guantanamo Bay.
Read more »
Posted by Angelo Agathangelou at 2:37 pm No comments: Links to this post

- What about the £4 trillion public sector and state pensions black hole?
- Lets go easy on the banks
- The Greeks say “yes, and?” to EU/IMF threats
- UK retail sales down because there’s no drought
- Netanyahu’s back room deal means attack on Iran back on
- Russia threatens NATO over missile defence
- The Queen’s Speech brings more destruction to the constitution
- Jury nullification
- Lawbreaking Lansley                                Source

Posted by Angelo Agathangelou at 2:23 pm No comments: Links to this post

What is behind US military mania at the expense citizens? - News Analysis

Taking food off the table for millions of Americans to prop up the military, that's how one opponent describes a package, approved by the US House of Representatives tackle the budget deficit. What is behind US military mania, and the growing poverty rates in America and who should pay for it? Source
Posted by Angelo Agathangelou at 1:57 pm No comments: Links to this post

Alex talks with Tim Larkin. Mr. Larkin is a former Naval Special Warfare Intelligence Officer. He has provided hand-to-weapon instruction to the most elite members of various military, law enforcement, and corporate special operations/security units and now runs Target Focus, a self-defense training course. Earlier this month, an exclusion order was issued by British interior minister Theresa May because the Home Office believes his presence "in the UK is not conducive to the public good."

Rogers: "Volume Is Not Going To Come Back. We've Had A Great 30 Years. That's Finished!"

Jim Rogers is hedging his gold (and silver) positions reflecting that this is normal, following such a tremendous run, and that this is good for the precious metal in the long-run. In his discussion with Maria Bartiromo this afternoon, he notes India's anti-gold 'protectionism' (and its potential balance of payments issues) that are trying to force the hoarding into risky 'productive' assets (as others might say).
The immutable commodity maven suggests JPMorgan (and its peers) could be behind the drops in the overall commodity complex as the uncertainty of their positions (and liquidation potential to raise cash as bank examiners begin their forensics) becomes more important. He holds the USD, which he hates; has a number of equity shorts; and is most fearful of banks
Read more »
Posted by Angelo Agathangelou at 8:48 am 1 comment: Links to this post

The shifting tide towards sovereignty sweeps the European Union 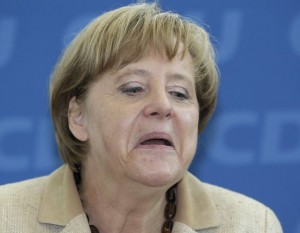 Chancellor Angela Merkel’s ruling Christian Democrats have just suffered disastrous losses in a weekend election in Germany’s most populous state.
If you are looking at this from across the water from the US, this may seem hardly world-shaking. In fact it is another confirmation that the grand project called European unity is quickly coming apart at the seams.
Support for the Christian Democrats slumped from 35% to 26% in North Rhine-Westphalia. The Left Social Democrats thoroughly trounced Merkel’s party with 38%. The Greens boosted their share to 12%. This suggests an incoming red-green coalition, which has in the past ruled Germany at the national level. Commentators seem united in the view that voters in this prosperous well-heeled state turned against Merkel’s unpopular austerity policies. But I think this is under-stating the real message coming from the ballot box.
North Rhine-Westphalians were really rejecting Merkel’s slavish obsession with a bigger and ever more bullying EU. In so doing they are reflecting a mood that is now detectable everywhere in Europe, while no-one dares to speak its name. A clear pattern is developing. The Christian Democrats earlier crashed in the election in the Schleswig-Holstein, again on the back of the austerity issue. But looking deeper this of course is nothing more than the stalking horse for a popular mood utterly disenchanted with power-grabbing supra-national European institutions.
The Spanish, Italians, Greeks, Dutch, Brits, Danes, Swedes, Portuguese, Austrians, and Irish are increasingly turning to a plethora of non-establishment parties who hold their political noses at the mere mention of Brussels.


For those who have not been following the situation with Iran closely – especially how Israel fits in – it might be somewhat surprising to learn that Israel is not all too interested in negotiating with Iran.
One might assume that Israel would want a peaceful resolution so both countries can leave in peace without a drop of blood shed in the name of stopping an alleged nuclear weapons program.
That assumption would be dead wrong, as Israel has completely ignored the fact that both U.S. intelligence agencies and U.S. Secretary of Defense Leon Panetta have said Iran does not have nukes and instead declared that talks with Iran are a “trap.” 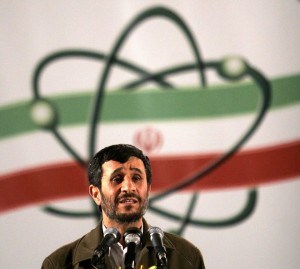 Indeed, somehow they continue to act antagonistically towards Iran even when their own military chief admitted that Iran has not decided to begin developing nuclear weapons.
In what might be a shocking article for some, Barak Ravid wrote for Haaretz, “Israel views the talks, set to take place on May 23 in Baghdad, with some bitterness, perhaps even with hopes that they will fail completely.”

What we are seeing across the Western world is exactly what happens when faith in the systems of governance and commerce are shaken to such a degree that the emerging cracks in the foundation appear too large and the holes too gaping to fix by traditional means. Nowhere is this more obvious than in Greece, where a system-wide reset seems the only realistic outcome at this point.