The golden snitch: how the Globalists stole the Greek election 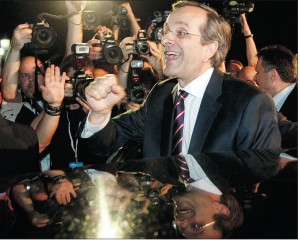 By Richard Cottrell:
Harried and bullied by the globalist media, the Wall Street barons  and combined firepower of the EU and the IMF, Greeks have just handed the poisoned chalice back to the same crowd of scallywags and cronies who caused the country so much misery in 40 years of misrule since the fall of the military junta in 1974.
Unbelievable as it may seem from the perspective of anyone who closely studies events in that deeply troubled land, it seems likely that a combination of New Democracy (notional right) and Pasok (even more notionally left) will take up the reins of power once again.
The result will be yet another round of plunder by an institutionalized kleptocracy which has grown fat and waxy while Greeks themselves have rarely known stability or a decent standard of living that wasn’t bought with crazy economics and funny money.
Okay, those are the headlines as the smug Antonis Samaras, leader of ‘New’ Democracy, heads back to the trough with a horrible self-satisfied look on his pink snout. But is it really quite that simple? I think not, because the election as conducted was patently far from above board.
I have strong suspicions that the result was gerrymandered with the aid of every trick in the book to fix the ‘correct’ result that will satisfy the international money mafia.
Unfortunately, the Greek electoral system positively encourages dirty tricks at the ballot box. In order to permanently institutionalize turn and turn-about rule by the two major parties, they jointly cooked the constitution so that whichever of them topped the poll would always earn a bonus reward of fifty seats.
Yes that’s a nice top-up of obedient faceless cronies who get to run the country having never, effectively, won the endorsement of anybody or anything except the bigwigs of the heavily entrenched system.
Read more »
Posted by Angelo Agathangelou at 11:33 pm No comments: Links to this post

by Mike Masnick: Even as key committees and a bunch of elected officials in the EU Parliament have come out against ACTA, all that really matters is the final vote. And the pro-ACTA forces are making a very big push to get it approved. Some are making arguments on its importance (and pretending that the concerns are overblown). Others are suggesting delays in the vote, in hopes of having more time to build support. Finally, some others have suggested "amendments" to ACTA that would remove some of the more controversial bits. Of course, that's a much more difficult move than you might think, since we're talking about an agreement that has already been in this "final" form for well over a year, and was the result of years of negotiation with a bunch of other countries, many of whom have already signed off on the document. Re-opening the negotiations at this stage would open up a huge can of worms (and would piss off the US negotiators). I just don't see it happening.
Read more »
Posted by Angelo Agathangelou at 11:00 pm No comments: Links to this post

The British government has proposed legislation that will give blank cheques to Internet and phone firms to pay them to track everyone's E-Mail, Twitter, Facebook and other Internet usage. It is going to cost hundreds of millions of pounds for a massive invasion of people's privacy along with breaching civil rights of almost every citizen in the country and presumably anyone from abroad who communicates with them. The legislation is supposed to catch terrorists before they terrorize, that is of course the excuse!

At the latest Casey Research conference, Recovery Reality Check, James Rickards, senior managing director of Tanget Capital Partners and author of Currency Wars: The Making of the Next Global Crisis, debates Harry Dent, founder and president of HS Dent Foundation, on the subject of which is more likely in the near-term economic future, inflation or deflation. Source
Posted by Angelo Agathangelou at 9:08 pm 2 comments: Links to this post

Populations butchered and held hostage - Blatantly overrun with high-tech foreign mercenaries - Syria is slipping and sliding into war - A resident Syrian explains. Source
Posted by Angelo Agathangelou at 8:13 pm No comments: Links to this post

By: Clive Maund: The acute global economic crisis today is the direct result of the continued wilful obstruction and overriding of the normal checks and balances that should operate within a capitalistic system of commerce. This interference has been perpretated by powerful banks and governments acting in collusion, for reasons of profit and power. At every instance in recent years when it looked like the economy was slipping into a necessary recession they have assumed a godlike role and stepped in to head it off. These periodic recessions are necessary to prevent excess debt building up within the system, but the banks liked the ever growing debt, because it meant ever bigger profits for them as they created money out of thin air and then lent it to everyone and everything and raked in massive interest payments. Being immensely powerful they exerted more and more control over governments and succeeded in bending them to their will, culminating in them "coming out" by actually maker bankers into Presidents and Prime Ministers, as has recently occurred in Greece and Italy. So there you have it - the world is now controlled and governed by bankers. The problem with this situation is that their objectives, which are the accumulation of ever greater profit and power, are at odds with those of the population at large.

The reason that things are coming to a head now is that global debt has grown to such gargantuan proportions that the parasites, the banking elites, are now killing their hosts, which is everyone else - Federal governments, State governments, businesses and ordinary citizens.
Read more »
Posted by Angelo Agathangelou at 6:22 pm No comments: Links to this post

I want to know how to send help directly to "..this new station struggling to finance it's operations" Don't you? How about a no fly zone over Israel and regime change? Too bloody. How about "Boycott all goods services and anyone endorsing the Nazi Gulag State of Israel"?
Posted by Angelo Agathangelou at 1:01 pm No comments: Links to this post 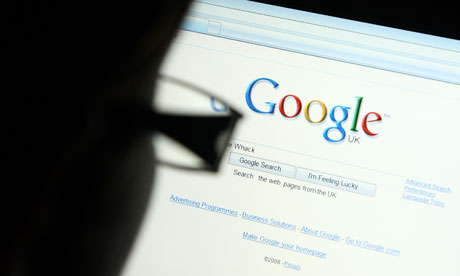 The normally-reserved Yves Smith asks whether Obama should be impeached over it.
Democratic Senator Wyden – the head of the committee which is supposed to oversee it – is so furious about the lack of access that he has introduced legislation to force disclosure.
Republican House Oversight Committee Chairman Darrell Issa is so upset by it that he has leaked a document on his website to show what’s going on.
What is everyone so furious about?
An international treaty being negotiated in secret which would not only crack down on Internet privacy much more than SOPA or ACTA, but would actually destroy the sovereignty of the U.S. and all other signatories.
It is called the Trans-Pacific Partnership (TPP).
Read more »
Posted by Angelo Agathangelou at 3:29 am No comments: Links to this post

The Tiresome Eurozone Soap Opera Has Entered Re-Runs
by Charles Hugh Smith
The Eurozone "drama" needs some fresh plot developments; it has become boring. What's more tiresome than a hastily rehearsed soap opera that replays the same boring plots again and again? Re-Runs of that soap opera. The Eurozone "drama" is now in re-runs and I for one am switching channels. Nothing will change until some critical part of the worm-eaten, corrupt construct of artifice and denial collapses in a heap. Until then, all we have is replays of the same boring plot lines: 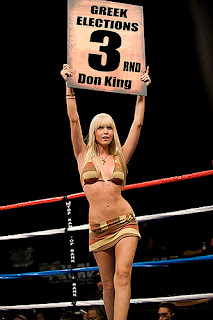 Put-upon Greece: We were just minding our business here in the sunny south, living happily on borrowed billions in a thoroughly corrupt Status Quo, and suddenly we're debt-serfs squeezed by rapacious Eurozone enforcers of the banking cartel. What did we do to deserve this? It's not fair.
Put-upon Germany: We were just minding the store here, racking up 40% of our GDP in exports and raking in bank profits loaning money to our Eurozone compatriots, when suddenly everyone who's lived beyond their means demands that we refinance their debts because we're rich. Excuse us, but did anyone look at how we got rich? Hard work, cuts in spending, high taxes and a tight lid on wages. What did we do to deserve this? It's not fair.

Read more »
Posted by Angelo Agathangelou at 3:11 am No comments: Links to this post

Adam Curtis: At the beginning of this year one of the weirdest characters ever to become involved in the present Afghan war died. He was called Jack Idema and he was a brilliant con-man. For a moment, during the early part of the war, Idema persuaded all the major TV networks and scores of journalists that he was some kind of special forces super-hero who was using all kinds of "black ops" to track down and arrest the terrorists. In reality, before 2001, Idema had been running a hotel for pets in North Carolina called The Ultimate Pet Resort. He had been in prison for fraud, and had tried to con journalists before about being some kind of super-spy. But September 11th gave him his chance - and he turned up in Kabul dressed like this.

And everyone believed him and his stories. In the process Idema brilliantly exposed the emptiness and fakery of much of the TV and newspaper reporting of the war on terror.
Read more »
Posted by Angelo Agathangelou at 2:04 am No comments: Links to this post

By Richard Cottrell: Being an ancient country, both events and time tend to run around in continuous circles in Italy. To find clues in understanding the current maze of affairs in that country, the best thing to do is organize a fishing expedition into the past. It is amazing how the most complex issues are thus invariably resolved.
For example, take the following burning question, “Is Italy currently laboring under a dictatorship?”
To answer this, we flip back the pages of history to the arrival of Benito Mussolini, back in 1922. The story that he led the march on Rome is, by the way, a hoary old canard. In fact the penniless insurrectionist cadged the train fare from one of his acolytes.
Nonetheless Mussolini’s pledges of nearly a century ago ring a familiar chord in modern Italy.  He preached the virtues of a balanced budget, reorganizing the economy, shaking up the labor markets and so forth.
He got himself elevated to power with the votes of the radical, liberal and Catholic parties, since the Blackshirts had little more than a token force of deputies in parliament.
Seems familiar? Well all becomes clear when you simply swap Mario Monti for Benito Mussolini.
Read more »
Posted by Angelo Agathangelou at 1:09 am No comments: Links to this post