TSA whistleblower calls Alex Jones and reveals the TSA are hiring harden criminals on purpose! Source
Posted by Angelo Agathangelou at 11:00 pm No comments: Links to this post

The Absurdity of NATO: azizonomics

The whole world knows the name Gavrilo Princip, and that of he man he assassinated, Archduke Franz Ferdinand. Princip’s shot triggered the Austro-Hungarian invasion of Serbia that set in motion the chain of events leading to the Great War of 1914.

After Serbia appealed to Russia for help, Russia began moving towards mobilization of its army, believing that Germany was using the crisis as an excuse to launch war in the Balkans. Upon hearing news of Russia’s general mobilization, Germany declared war on Russia. The German army then launched its attack on Russia’s ally, France, through Belgium, violating Belgian neutrality and bringing Great Britain into the war as well.
Is it possible that a similar chain of events may have already begun unfurling with the Syrian downing of a Turkish F-4 fighter jet? Turkey have already invoked a full meeting of NATO,  claimed that Syria have fired on a second Turkish plane, and vowed that Syria’s actions “won’t go unpunished”.
Read more »
Posted by Angelo Agathangelou at 9:32 pm No comments: Links to this post

We Are Living in a ‘Modern-Day Depression’: David Rosenberg

The Federal Reserve cut its growth forecast for the second half of 2012 and 2013 last week, raising concerns yet again about the potential for a "double-dip" recession. While some, notably the cycle watchers at ECRI, believe the U.S. economy is definitely heading for another recession (or already there), Gluskin Sheff's chief economist and strategist David Rosenberg goes a big step further.
"We are living in a modern-day depression," he declares.
This dramatic statement is based on several factors, including the record number of Americans living on Food Stamps — 46 million or 1-in-7 in 2011. Because these benefits are now given in the form of electronic debit cards, we don't have bread lines like in the 1930s, but they are there in virtual form. And that's just the most obvious form of government support for its struggling citizenry.
Read more »
Posted by Angelo Agathangelou at 9:02 pm No comments: Links to this post


Billionaire 'Terrorist Country Raping' investor George Soros speaks about Europe's sovereign-debt crisis. Soros called on Europe to start a fund to buy Italian and Spanish bonds, warning that a failure by leaders meeting this week to produce drastic measures could spell the demise of the currency. He spoke yesterday with Bloomberg Television's Francine Lacqua in 'The World's Fraud capital' London. Source
Posted by Angelo Agathangelou at 2:17 pm No comments: Links to this post

Another European Summit, Another Beggars At The Feast Spectacle? + Spain Formally Comes A Begging 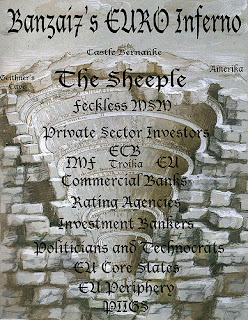 And here I'm breaking bread With the upper crust! Beggar at the feast! Master of the dance! Life is easy pickings If you grab your chance. Everywhere you go Law-abiding folk Doing what is decent But they're mostly broke! Singing to the Lord on Sundays Praying for the gifts He'll send. But we're the ones who take it We're the ones who make it in the end!
– “Beggars at the Feast,” from Les Miserables
J. Luis Martín: The European Union will hold yet another do-or-die summit this week. On this occasion, “growth” is the plat du jour; the allegedly missing recipe in the “plan” to save the euro. In addition, some suggest that this time is also “different” because Greece, France, Italy and Spain may now be ready to corner Germany to relax its sacrosanct fixation with austerity. This summit truly promises to be quite a gathering of beggars at a feast, no less.
Billions to nowhere
The outcome of previous European summits leaves little room for hope that anything substantial will be achieved this time around, except perhaps for another massive central bank intervention, as was the case after last summer’s “Marshall Plan” summit, as well as after last December’s “10 days to save the euro” meeting.
Read more »
Posted by Angelo Agathangelou at 12:24 pm No comments: Links to this post 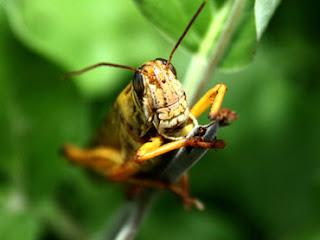 A growing number of rootworms are now able to devour genetically modified corn specifically designed by Monsanto to kill those same pests. A new study shows that while the biotech giant may triumph in Congress, it will never be able to outsmart nature.
Western corn rootworms have been able to harmlessly consume the genetically modified maize, a research paper published in the latest issue of the journal GM Crops & Food reveals. A 2010 sample of the rootworm population had an elevenfold survival rate on the genetically modified corn compared to a control population. That’s eight times more than the year before, when the resistant population was first identified.
Experts are also noting that this year’s resistant rootworm populations are maturing earlier than expected. In fact, the time the bug’s larvae hatched was the earliest in decades.
“The Western corn rootworm 'season' is underway at a pace earlier than I have experienced since I began studying this versatile insect as a graduate student in the late 1970s,” entomologist Mike Gray wrote in The Bulletin, a periodical issued by the University of Chicago’s Department of Crop Studies.
Read more »
Posted by Angelo Agathangelou at 10:31 am No comments: Links to this post

"Ideas that have hijacked our brain."
Watch complete 3 part series: http://www.drjoesvideo.com Source
Posted by Angelo Agathangelou at 5:08 am No comments: Links to this post

The Russell Tribunal in South Africa has officially named Israel and apartheid state.
South Africans are combating oppression in Palestine, sparing on their own struggle against apartheid.
Read more »
Posted by Angelo Agathangelou at 2:20 am No comments: Links to this post

Wolfgang Schäuble: Ask Not What Germany Can Do For You, Ask How Many Government Workers You Can Fire

Submitted by Tyler Durden: And it seemed like the most innocent case of detached retina ever. On Friday, newly elected Greek PM Samaras had to be rushed to the hospital due to the rather peculiar ocular complication, only to be followed promptly by the new Finance Minister Vassilis Rapanos fainting and also being given urgent medical care. Both are procedures that require a few hours of inpatient treatment. Yet judging by the implications these two freak occurrences have had, one would image that both patients are comatose and on the same ventilator that kept former Egyptian president Hosni Mubarak half alive, half dead a week ago. The punchline, however, is that this may be the only case of detached retina in modern history that costs a country €5 billion.
From Kathimerini:

"The health problems of Prime Minister Antonis Samaras and new Finance Minister Vassilis Rapanos this weekend are changing the government’s timetable and postponing the visit of the representatives of Greece’s creditors by a week, according to state-run TV. The hospitalization of the two very people the inspectors of the European Commission, the European Central Bank and the International Monetary Fund – collectively known as the troika – wished to meet, means that the latter had to put off their visit that was originally planned for Monday."

'I think I got away with it': Dumb thug is convicted after being caught bragging on Facebook even before jury began deliberations (Lol)