Black men have joined the KKK

By Earnest Crim III: I remember when I first learned about the Ku Klux Klan (KKK) as a child. They were portrayed to me as a villainous White posse that went around killing Blacks after slavery to “put them in their place.”
I had so much disdain for this crew of cowards, especially when I would go on to learn, by way of my own curiosity, that often times White politicians and businessmen held high positions in this heinous organization.
In fact, the famous silent film entitled “Birth of a Nation” (originally “The Clansman”) centered around not only the promotion of Blacks as an inferior race also the portrayal of the Klan as some sort of patriotic group coming to rescue Whites from the Black race.
The Klan often came across as a fairytale creation to me, which was meant to scare Blacks much like Santa Claus is used to scare children into behaving appropriately. Their comical clownish outfits and propensity to burn crosses seemed so outrageously hypocritical that you would just assume they were crafted creatively by a writer of fiction. (In fact, I recently discovered that there was in fact a book entitled “Superman vs. the KKK” that although seemingly fiction, was based on actual events. Click here for more info on that.)
Although often times depicted as a protagonists to the White community, the Klan was without a doubt the antagonist to the Black community. In reality, the Klan was the enemy all Americans and a hindrance to experiencing the “freedom” that was eloquently written about in the Declaration of Independence. The true protagonist, in contrast to these thugs, would be courageous heroes such as Ida B. Wells, Malcolm X (and his father) and Marcus Garvey, to name a few.
[Editor’s note: It was reported in 1922 that Marcus Garvey met with the Imperial Wizard of the KKK, Edward Clarke. In Negro World (September, 1923), Garvey wrote, “I regard the Klan, the Anglo-Saxon clubs and White American societies, as far as the Negro is concerned, as better friends of the race than all other groups of hypocritical whites put together.
Read more »
Posted by Angelo Agathangelou at 10:30 pm No comments: Links to this post

Scientists of a Swiss institute say they have evidence that former Palestinian leader Yasser Arafat may have been poisoned with polonium. According to the findings of laboratory research conducted at the Institute de Radiophysique in Lausanne, Switzerland, Arafat was poisoned by polonium, a rare, highly radioactive element, al-Jazeera reported on Tuesday. "I can confirm that we measured an unexplained, elevated amount of unsupported polonium-210 in the belongings of Mr. Arafat that contained stains of biological fluids," said Dr. Francois Bochud, the director of the institute. Part 2

from the will-of-the-people dept

by Mike Masnick: A poll conducted in the UK has found that only 9% of those surveyed agreed that student Richard O'Dwyer should be extradited to face criminal charges in the US for creating TVShack, a site that let people link to videos hosted elsewhere. So far, the government has been ignoring public cries not to allow the extradition, but this poll really seems to suggest that the public is not too keen on shipping O'Dwyer overseas.

Only 9% of the British public believe he should face trial in the US for his actions, according to the YouGov research. The largest group, 46%, said O'Dwyer should not be prosecuted at all, while 26% felt he should be tried in the UK.

At some point, something has to give. The UK Home Office can't keep pretending that this is a minor issue that it can brush under the rug to keep the American government (and Hollywood) happy. Source
Posted by Angelo Agathangelou at 5:10 pm No comments: Links to this post 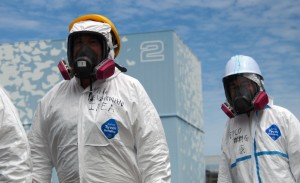 By Madison Ruppert: In a damning 641-page report (the introduction to which is embedded below) produced by the Fukushima Nuclear Accident Independent Investigation Commission (NAIIC), investigators reveal that the horrific and ongoing nuclear disaster at Fukushima was “a profoundly man-made disaster that could and should have been foreseen and prevented.”
Unlike other entities associated with the Japanese government, the NAIIC came to some quite damning conclusions, not the least of which is the accusation that the Tokyo Electric Power Company, or TEPCO, which continues to refuse to allow outside inspections of the reactor four building containing the dangerous spent fuel pool four, “betrayed the nation’s right to safety from nuclear accidents.”
The Fukushima NAIIC was formed by the statutory law enactment of Diet of Japan (the Japanese bicameral legislature made up of the House of Representatives and the House of Councillors) on October 7, 2011, although the Chairman and Members were appointed in December of 2011.
Unfortunately, it looks like the Japanese peoples’ “right to safety from nuclear accidents” will likely never be respected seeing as they just restarted a reactor amidst massive public protest and that, statistically speaking, nuclear disasters may occur once every 10 to 20 years.
From a purely rational standpoint, it is impossible to recognize a “nation’s right to safety from nuclear accidents” without recognizing their right to be safe from nuclear power entirely, and the Japanese government seems unwilling to do that.
While recognizing the deadly combination of the tsunami and earthquake in March 2011, the investigatory committee concluded that the disaster was in large part actually man-made.
Read more »
Posted by Angelo Agathangelou at 2:01 pm No comments: Links to this post

LIBOR RIGGING: The Slog reveals why the enquiry must be judicial

DOMINANT LIBOR DEALERS TOO CLOSE TO DOWNING STREET TULLET PREBON’S URGENT NEED FOR LIBOR SCANDAL TO DISAPPEAR
Libor rate fixing leaves PM in a fix
‘A Molotov Cocktail Party’ of conflicted interests
The Slog: As David Cameron might say, let’s be clear about this: Tory Party supporting inter-dealer brokers like Tullet Prebon and ICAP provide liquidity and anonymity to buyers and sellers. These clients are frequently banks of one form or another. Michael Fallon insists that Tullet’s “helped to nail the banks” – but given the confidentiality of the firm’s role and the BBA CEO on board as a Senion Non-Exec, this is quickly revealed to be nonsense: for them to have done this would’ve required both a betrayal of client trust, and massive business losses. 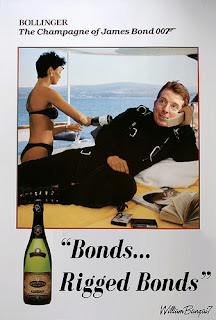 In fact, even the suspicion that they might have turned Queen’s Evidence with the FSA has helped lead to a fall-off in business at both ICAP and Tullet’s. At the latter, ‘Banks that use the services of brokers like Tullett’s are scared so they’re doing less business’ wrote The Times last September; and they weren’t wrong. Tullet Prebon income dropped 3% in both November and December of last year, and the firm’s year was flat at £910m of income. In January of this year, Tullet’s cut 80 jobs, and then a further 80 in March.
In short, the continuing mistrust, suspicions and controversy surrounding the Libor rate are ruining Tullet’s business. The firm therefore has an enormous conflict of interest via Michael Fallon’s membership of the Treasury Select Committee – and a life-or-death desire to see the scandal go away.
Read more »
Posted by Angelo Agathangelou at 1:33 pm No comments: Links to this post

Posted by Angelo Agathangelou at 1:28 pm No comments: Links to this post

Posted by Angelo Agathangelou at 12:26 pm No comments: Links to this post

Central banks issue the command to keep the easy money flowing. The ECB cut its benchmark interest rate to a historic low, the Bank of England agreed to more QE, China's central bank unveiled a surprise interest rate cut, and the Danish Central bank went one step further and entered NIRP territory, a negative interest rate policy. The US is under anesthesia already. Reggie Middleton will explain why no amount of money printing can create wealth.

Submitted by Tyler Durden: The last time Mario Draghi made an unequivocal statement regarding his actions under exceptional circumstances, we pointed out the unthruthiness of his comment that LTRO borrowing in no way stigmatized a bank. That did not end so well for the LTRO banks. Today's ECB press conference perhaps sets him up for another banana-skin down the road. From the 20 minute segment, the ECB head describes the lowering of eligibility standards for ECB collateral to include assets that banks take as collateral in the real economy ("credit claims and ABS of lower rating", i.e. rusty old cars, empty coffee-shops, unkempt holiday homes). His description of the hypothecated-hell: "It's very useful [for the banks] to lend to the real economy; as the banks generate collateral that they can now use for funding themselves" - which sounds awfully like a ponzi scheme - is nothing less than a massive on-boarding of all European asset risk by the ECB (using the banks as a simple pass-thru). This would seem to dramatically lower the quality of the ECB balance sheet. But have no fear, for as the new maestro puts it "we want to do this in a way to keep the risks of the ECB balance sheet very very low". Low indeed.
His commentary on the lending to SMEs and the broadening of ECB collateral eligibility starts at around 20:00...
Read more »
Posted by Angelo Agathangelou at 4:06 am No comments: Links to this post 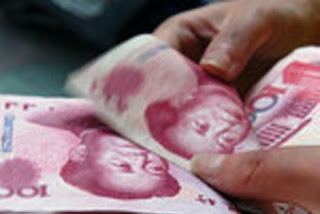 By Alicia Barry: In a move that has slipped under the radar of even the alternative financial media, China celebrated Independence Day by handing the US Dollar’s reserve currency status another severe flesh wound.
China moved Wednesday to make Australia the first G20 nation with the ability to directly convert its currency into Chinese yuan, bypassing the US dollar .

The writing is on the wall for the dollar’s reserve currency status.

Australia is hoping to become the third country in the world to be able to directly convert its currency into Chinese yuan.

The Treasurer Wayne Swan will push the case at a currency forum in Hong Kong and during meetings with Chinese leaders in Beijing next week.

Analysts say Australia’s push to directly convert its currency into yuan will make trade with China more efficient and will lower transaction costs, particularly for the country’s big miners and importers.

Posted by Angelo Agathangelou at 2:10 am No comments: Links to this post

Libyan Update From a Libyan - A Failed State

From Al Qaeda to the Militias Murder everywhere.All the money has disappeared. This is the first of a three part interview. Source
Posted by Angelo Agathangelou at 12:18 am No comments: Links to this post