Posted by Angelo Agathangelou at 9:01 pm No comments: Links to this post

Max Keiser and co-host, Stacy Herbert, demand that Jamie Dimon leave Earth alone! They also discuss the global Jim Jones like cults surrendering to the derivatives with hostile intent. In the second half of the show, Max talks to Jim Rickards, author of Currency Wars, about 'Singapore on the Mediterranean' and how the U.S. Congress will intervene in the Libor case to avoid the Son of Tarp. Source
Posted by Angelo Agathangelou at 3:45 pm No comments: Links to this post

A Short History of Greek Military Coups - The Needle

With the recent speculation, in some quarters, suggesting that the Greek military might step in, I decided to look back and find out how the last Greek military coup came about and, as I was interested myself, and presuming others might be also, write a brief history. However, each time I looked for a starting point, an historical moment which needed little explanation of itself, I was driven further back in time. 20th Century Greek political history is so complicated, that I came to the conclusion that it could only be understood by someone who actually lived through it, so little sense it made to me. Nevertheless, never one to be put off writing on a topic I am, hitherto, completely ignorant of, I have stitched together a very brief overview of Greece’s history over the last century.
To understand modern Greece one must understand it’s ancient history and it’s Geography. The Golden era of ancient Greece was rarely Pan Hellenic, with the legendary exception of King Menelaus’ expedition and siege of Troy, the brief cooperation during the war against King Xerxes of Persia, and perhaps Alexander the Great’s domination of what is now Greece, it has predominantly been the glorious histories of city states. And it’s geography is crucial, it has always been thought to stand as the boundary between East and West, whether you consider the ‘East’ to be Persia, the Ottoman Empire, or Communist eastern Europe it is best to understand that Greece’s eastern frontiers have never been an impassable barrier, infact Greece’s porous frontiers have ebbed and flowed with fickle fate and capricious fortune. As a consequence Greece is one of the most polarised nations on the planet.
Read more »
Posted by Angelo Agathangelou at 3:36 pm No comments: Links to this post

A story about the fire at the heart of suffering. Bringing together dancers, musicians, visual artists and 3d animators, the film takes a critical look at the events of the past decade that have shaped our world.

Read more »
Posted by Angelo Agathangelou at 2:29 pm No comments: Links to this post

Lawsuit filed against the U.S. military and CIA over drone assassination program 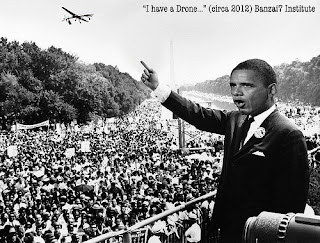 By Madison Ruppert: The legality of America’s drone-based “targeted killing” program has recently come under fire in court, although mostly over the general basis on which the government can claim that meeting in secret to decide someone’s death counts as due process.
Unfortunately, lawyers for the government continue to invoke the privilege of state secrecy in order to avoid even having to confirm or deny that such a program exists to begin with, never mind actually addressing the legal basis for the practice.
Now the Center for Constitutional Rights (CCR) and the American Civil Liberties Union (ACLU) have joined forces to fight on behalf of family members of three Americans who were murdered last year in drone strikes in Yemen.
The lawsuit targets top-ranking United States government officials, alleging that they actually killed the three Americans, including a 16-year-old boy.
They allege that this action violated international human rights law and the United States Constitution itself, a fact echoed by human rights lawyers stating that British civilians are actually “parties to murders” which are carried out by U.S. drones.

This lawsuit is groundbreaking, to say the least, and is the first lawsuit to actually challenge the legality of specific killings as well as the first to argue that the U.S. was not actually engaged in an armed conflict in Yemen at the time of the killing, thereby prohibiting the use of lethal force.
Read more »
Posted by Angelo Agathangelou at 10:50 am No comments: Links to this post

Given the quality of fox news we can usually take their report and flip it to find the actual truth, so it would seem Israel bombed their own holidaying citizens as a false flag attack for an excuse to create more stimulus to the American military industrial complex with a balls deep attack of Iran AKA WWIII.

A bank clerk who dreamed of becoming a model stole £46,000 from the tills — and spent it on plastic surgery and shopping sprees.
Rachael Claire Martin, 24, used the cash to fund a boob job, dental work and liposuction, as well as hair extensions and nights out.
She took thousands at a time from her Barclays branch in Liskeard, Cornwall, in an eight-week period.
Martin initially denied 25 counts of theft in 2010.
But on what should have been the first day of a week-long trial, she admitted a single charge of theft covering the full amount of £46,000.

Steal thousands from a bank? You face criminal charges, a trial and jail time.
When that same bank manipulates a $600 trillion market by rigging the LIBOR rate for profit? No criminal charges, no trial, no jail time.
This is more surreal than Barack “I’ll Bomb Ya” Obama’s Nobel Peace Prize.
Read more »
Posted by Angelo Agathangelou at 8:02 am No comments: Links to this post

"Londoners Brace themselves to endure the Olympics." Chaos hits days before start

Lew Rockwell Pins the Tail on Ben Bernanke and the Rest of Washington's Donkeys!

Ben Bernanke was back on the hill today, in his second day of testimony before members of Congress for his Semi-Annual Report. He has slowly started to change his tune over the course of recent appearances. It seems as if the same man who claimed, with incredible hubris, that the Fed could drop money from helicopters if necessary in order to reliquify and reignite the economy is now openly stating that there are limits to what monetary policy can achieve. In fact, he said that too much QE via treasury and agency security purchases could actually hurt the market. When confronted about the Fed's handling of monetary policy and Ron Paul's Audit the Fed bill, Bernanke said it would be his "nightmare scenario" if politicians had the power to overturn or second-guess monetary policy. So what should we make of this? Has Bernanke been humbled by reality, or is he just holding his best hand for last? According to our guest, Lew Rockwell, the Monetary Control Act of 1980 gives the Fed the authority to buy more than just Treasuries and Agency debt. We speak with Mr. Rockwell for his take during the show.
Read more »
Posted by Angelo Agathangelou at 7:29 am No comments: Links to this post

Submitted by Tyler Durden: That Lieborgate is about to spill over and take down many more banks is well known: as previously reported that the world's biggest bank Deutsche Bank, has become a rat for the Liebor prosecution having turned sides. The reason: "Under the leniency programs of the EU, companies may get total immunity from fines or a reduction of fines which the anti-trust authorities would have otherwise imposed on them if they hand over evidence on anti-competitive agreements or those involved in a concerted practice." However, just like in the case of Barclays (with Diamond), JPM (with Bruno Iksil), UBS (with Kweku) and Goldman (with Fabrice Tourre), there always is a scapegoat. Today we find just who that scapegoat is. From Bloomberg: "Regulators are investigating the possible roles of Michael Zrihen at Credit Agricole, Didier Sander at HSBC and Christian Bittar at Deutsche Bank, the person said on condition of anonymity because the investigation is ongoing. The names of the banks and traders were reported earlier today by the Financial Times."

Of course, as so very often happens, the link between the investigated firm, and the person in question no longer exists - after all what better brute way to tie up loose ends, than to fire the person in question at some point in the past: "Michael Golden, a spokesman for Deutsche Bank, confirmed that Bittar left the bank last year and declined to comment on the investigation." Not surprising. Yet this is where the story gets interesting, and provides a whole new twist on the Lieborgate scandal.
Read more »
Posted by Angelo Agathangelou at 6:11 am No comments: Links to this post 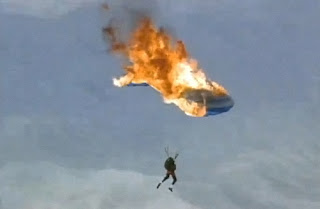 'The economic collapse could not possibly be a “random” event.  Its culmination requires the collusion of so many corporate and government entities that it would be foolish to call it anything other than conspiracy.'
Brandon Smith: In January of this year, I wrote an analytic financial piece entitled ‘Baltic Dry Index Signals Renewed Market Collapse’:

In that article I discussed the record breaking low hit by the BDI and its implications for the global economy; namely, that it signaled a steep decline in true demand around the world for raw materials used in the manufacture of consumer goods, and that similar declines in the BDI’s past have almost always prophesized a crisis event in financial markets.  The mainstream media attempted to write off the implosion of the BDI as a fluke, tied to the “overproductions of cargo ships”, instead of a warning sign of deteriorating demand.  Of course, the past 6 months have proven that assertion to be entirely false.

Manufacturing has tumbled in the U.S., the EU, and Asia simultaneously as orders drop back to the dismal levels last seen in 2008-2009 after the credit crisis first took hold:

By Americanrevolution02: This is the full press conference. It's official folks. The official government investigation into the long form birth certificate Barack Obama released and claimed as his own on April 27, 2011 has been proven without any doubt to be a forgery.
Read more »
Posted by Angelo Agathangelou at 12:00 am No comments: Links to this post