George discusses why we need a real labour party in the country.
Posted by Angelo Agathangelou at 11:51 pm No comments: Links to this post

Max Keiser and Stacy Herbert discuss CNBC swooning for Biebanke,' Warren Buffett waving many red flags and tax revenue plummeting in UK after a dose of Georgie Porgie's bubble and fraud pudding. In the second half of the show, Max Keiser talks to Dominic Frisby, resident gold bug at Moneyweek, about debt bombs and the City of London. They also discuss how North Sea oil enabled the big bang and how a property bubble could undo it. Source
Posted by Angelo Agathangelou at 7:36 pm No comments: Links to this post

PRESS TV youtube link: Max interviews Steve Keen from Debtdeflation.com. It has been five years since global debt crisis began. The debt is now so great that it can no longer be hidden. Max discusses the issue with Steve to see what triggered the current debt crisis, what the response to it was and where we stand now. Steve also comments on the latest global debt crisis and banker's role in the current situation.Steve Keen is a professor in economics and finance at the University of Western Sydney and the author of Debunking Economics. Source
Posted by Angelo Agathangelou at 6:25 pm No comments: Links to this post

From the ghost in the machine dept:
Who is messing with the code of press tv articles on youtube pointing out UK and US government blunders?
A couple of blogs about the NYPD's mass murderous rampage and the Torturing dictator's welcome to the UK by our PM... going funky today.

PRESS TV youtube link in case I miss the next switch!
Posted by Angelo Agathangelou at 6:10 pm No comments: Links to this post

The NYPD Was Responsible For 10 Of The 11 People Shot Yesterday!

Submitted by Tyler Durden: The official media-friendly narrative explaining yesterday's latest tragic shooting incident in midtown Manhattan in which a recently unemployed Jeffrey Johnson, 58, walked up to his former boss and shot him three times point blank before "calmly" walking away, is that Johnson also shot 9 other people, luckily none fatally, before being taken down by the NYPD. Sadly, as so often happens these days, the "media-friendly" narrative is wrong, and as CBS and Guardian report, Johnson did not fire during the quote unquote shootout, in which at least nine other perfectly innocent were hit, all of them by stray NYPD bullets.


From CBS: "Police said it is unlikely that Johnson fired during the shootout." Uhm, then isn't shootout a somewhat inaccurate word? "One witness told investigators that Johnson fired, but ballistics tests don’t back that up, authorities said... At least nine other people on the street were also shot, but Mayor Michael Bloomberg said it is unclear whether they were shot by the suspect or police. “Some may have been shot accidentally by police officers who responded immediately,” Bloomberg said." In other words of the (at least) 11 people shot yesterday, 2 of whom fatally, the NYPD was responsible for 10 of those shot, 9 of whom were literally "collateral damage" in a non-shoot out, and should be sacrificing various animals to their assorted guns that the NYPD, in missing their designated target, is at least quite atrocious in hitting any major organs. All of which of course begs the question: is a hit-to-miss (and potentially hit-to-casualty) ratio of less than 10% for New York's finest really acceptable and is this the kind of statistic that NY City wishes to boast in enticing new tourists?
Read more »
Posted by Angelo Agathangelou at 3:03 pm No comments: Links to this post

Bahrain dictator in London amid protests

PRESS TV youtube link: It would not have been the welcome Bahraini dictator Hamad al-Khalifa would have wanted, the jeers of anti-regime protestors ringing in his ears as he left an official engagement with British PM David Cameron. It was the third official visit for King Hamad since David Cameron became leader in May 2010.Mohammed al-Tajir, a human rights lawyer is among those arrested and subjected to torture for his anti-regime activities in Bahrain. He thinks the dictator's UK visit sends out the wrong message.
Read more »
Posted by Angelo Agathangelou at 1:53 pm No comments: Links to this post 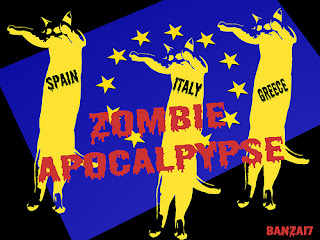 With impeccable timing, it seeped to the surface that a group of ten experts at the German Finance Ministry is studying ways to deal with a Greek exit from the Eurozone. Though rumors about a “Plan-B” had been circulating for months, the leak provided details. A Finance Ministry spokesperson clarified helpfully on Friday, rather than denying it, that the group has been in existence for over a year. Impeccable timing because it happened as Greek Prime Minister Antonis Samaras was arriving in Berlin for his begging and charm expedition. German Chancellor Angela Merkel must have smiled. The heat was on.
They should be soul mates, Samaras and Merkel, both belonging to conservative parties. But during the prior government when he led the opposition, he fought tooth and nail against her sacrosanct structural reforms. So their schmooze on Friday must have been quite something. But at the press conference, she said, “I want Greece to remain part of the Eurozone.” And she knew of “no one in the governing parties who doesn’t want that.”
Yes, she said that! Despite the onslaught of politicians in her government who over the past months promoted Greece’s exit—even hours before the meeting, on ZDF’s morning TV show. Maybe Merkel didn’t watch it. “We cannot provide more money,” Volker Kauder, Chairman of her CDU/CSU parliamentary group, told Germans nationwide. And Greece’s exit, he added, would be “no problem for the euro.”
Nevertheless, she soldiered on: “Commitments must be kept.” And warned, “Words must be followed by deeds.” She was “deeply convinced” that the Samaras government would do “everything” to solve the problems, but any decision would have to wait “for the Troika report.”
Ah-ha. Inspectors the EU, the ECB, and the IMF will spend much of September combing through Greece with a fine-toothed comb to come up with a report, the big report, the one that would determine if Greece deserved more bailout billions. The report would be so big that every politician, even Merkel, could hide behind it. No one would want to be the one to kick Greece out. But the faceless Troika report issued by a triple-layered, non-democratic bureaucracy could take the heat [read.... Greece Prints Euros To Stay Afloat, The ECB Approves, The Bundesbank Nods, No One Wants To Get Blamed For Kicking Greece Out].
She laced her speech with meaningless expressions of support but didn’t commit to anything. It was a good beginning, she said, but much work remained to be done—sounding like a broken record.
Read more »
Posted by Angelo Agathangelou at 10:49 am No comments: Links to this post

Death By Medicine: The History of Medical Tyranny with Dr. Peter Glidden

Posted by Angelo Agathangelou at 8:27 am No comments: Links to this post

A policeman has accidentally revealed a secret plan to seize Julian Assange “under all circumstances” if he steps outside the Ecuadorian embassy, in an embarrassment for Scotland Yard.

Martin Beckford: The uniformed Met officer was pictured holding a clipboard detailing possible ways the WikiLeaks founder could try to escape from the building he has been holed up in for the past two months.
His target, who is trying to avoid extradition to Sweden for questioning over alleged rape and sexual assault, is currently safe on diplomatic territory. He has been given political asylum by the Latin American country, on the grounds that he faces persecution in the USA over his whistle-blowing website, but faces arrest the second he steps outside because he has breached his bail conditions.
The policeman’s handwritten tactical brief, captured by a Press Association photographer as he stood outside the Knightsbridge embassy on Friday afternoon, discloses the “summary of current position re Assange”.

It stated: “Action required – Assange to be arrested under all circumstances.”

Read more »
Posted by Angelo Agathangelou at 1:25 am No comments: Links to this post

Garrett Epps: What kind of democracy teaches its young people they'll be punished for talking out of turn?

If there's one belief that unites Americans, it's that First Amendment freedom of speech is a good thing.  Everybody should have it: cigarette companies, SuperPACs, hate groups, Todd Akin, Cher, and Nichole Ritchie.
Teenagers, not so much. They might say something wrong. Better to shut them up.
The last time the issue of impudent teen speech came up in this column, my comments page was swamped with suggestions that the problem wasn't free speech, it was rudeness. Teens, you see, can't be allowed to be rude. The saucy-teen issue has surfaced again, this time in the person of a high-school valedictorian in a small Oklahoma town who used the phrase "what the hell" in a graduation speech and has been punished with the withholding of her diploma.
What the hell? 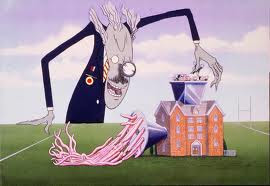 Is this really how a free country treats its young adults? And will the "good manners" brigade rally around this latest episode of petty grown-up bullying?
Kaitlin Nootbaar topped her class at Prague High School in Prague, Oklahoma.  She has won a full scholarship to Southwest Oklahoma State University, where she hopes to study biology. Any sane school would be boasting about her.
But Prague High Principal David Smith has apparently decided to punish Kaitlin because in her valedictory address she said that, when people ask her what she wants to be, she responds, "How the hell should I know? I've changed my mind so many times." According to Kaitlin and her father, Smith said there will be no diploma until she tenders a written apology. Kaitlin, bless her spunky heartland heart, has refused.
Read more »
Posted by Angelo Agathangelou at 1:06 am No comments: Links to this post

By Thomas Woods:  On LRC today (August 23) I respond to the bizarre Keiser Report segment that tried to claim Ludwig von Mises was a deviationist from the pure Austrian economics of Carl Menger, the founder of the school. Kind of inside baseball, you might think, but so full of the most preposterous errors that I had to smash it, politely. 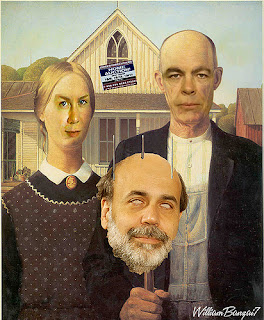 Keiser now has a post called "Tom Woods' Blunders." For a split second I wondered if maybe I had overlooked or misstated something. Then I saw his post.
It begins:

Translation: I haven't the foggiest idea how to answer Woods. If I say his reply to me is "lengthy" and "rambles," that will cover for the fact that I can't reply to 95 percent of it. Oh, and 15 minutes of bashing Mises and libertarians on the most uncomprehending grounds is not rambling or lengthy.


but I wanted to zero in on this bit:
In the following passage, taken from Tom Woods response to Sandeep Jaitly’s interview on “Keiser Report,” Tom Woods rationalizes the failure of his fundamentalist ideology and ‘economic calculation’ by wedging a lot of intellectual dishonesty into this quote: “Private ownership, which is precluded by state intervention, would encourage the preservation of the capital value of resources.”
The idea that private interests preserve the capital value of resources (‘unless they are interfered with by the state’) produces a superior economic outcome over the public interests preservation of capital value of resources is the type of pseudoscience, faux-Austrian claptrap that gives rise to economic dictatorialism, completely blind to the actual consequences of its actions.