SATURDAY ESSAY: Shaving Private Ryan + Bollocks: the triumph of the objectionable over the objective - The Slog 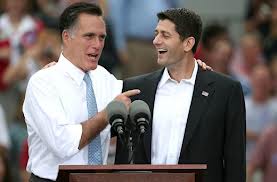 Cut through the Ryan hype, and there’s a bare-faced babe in arms underneath.
(Ryan & Romney’s Laugh-in)

On the basis of Dan Hannan’s tweeted recommendation (I simply will never learn) I decided yesterday to read Paul Ryan’s ‘Roadmap’ to economic and fiscal recovery for the United States. I’m a confirmed debunker of insight-free management consultancy, so Mr Ryan gets off to a 5-point penalty for me right away with his ‘roadmap’. It goes in there with critical path analysis, outputs, deliverables, windows and the rest of the jargonised nonsense churned out by those who have nothing to say, but are getting paid by the hour for doing it.
Ryan is being punted by the GOP spin machine as a brilliant econo-fiscal philosopher, presumably with the twin aims of (a) complementing Mitt Romney’s more ‘hands on’ approach to money, and (b) highlighting the fact that Obama is economically dyslexic – and his running mate is Joe Biden. It’s par for the course these days in politics to present anyone who can string a sentence together (especially in writing) as a hyper-genius, but then the example of Louise Mensch in the UK is a timely reminder that ability may be no guide to content quality.
In fact, Ryan is little more than a central-casting neocon hardline professional politician…his personal requirement for welfare until age eighteen (after the death of his father) notwithstanding. The Ryan males tend to keel over aged about 56, so at 42 we can be reassured – or horrified – that Paul would stay the course if elected. But he wouldn’t be a good bet as a two-term President after that.
Although Mr Ryan is not a Premier-league educational achiever (Miami University is way off the Ivy League ratings) he’s smart enough to have achieved a double major (joint honours) in economics and political science. But the subjects of his degree are for me a further condemnation. I’m a history/politics graduate myself – but then I went out and got a proper job. Aside from fries-shifting at McDonalds and waiting at tables, like most hardline politcians, Paul Ryan has never had a proper job.

Max Keiser and Stacy Herbert discuss what happens when ersatz money heroin stops working and Treasury bonds are sold by hucksters and everything is guaranteed by the state.  In the second half of the show, Max Keiser talks to John Rubino of Dollarcollapse.com about fiat currencies, how they collapse and how fast it happens. Source
Posted by Angelo Agathangelou at 8:57 pm No comments: Links to this post

Posted by Angelo Agathangelou at 5:12 pm No comments: Links to this post

Press TV Video: Max interviews Dan Collins from thechinamoneyreport.com. He talks about whether the United States economy is really larger than the world's second, third, and forth-largest economies combined?
Dan is the Founder/Editor of TheChinaMoneyReport.com. He is an MBA graduate of Rutgers University. He got his BA degree in economics from Michigan State University and was an exchange student at Tsinghua University in Beijing in the 1990's. Dan is also a contributing author to publications such as Financial Sense and The China Business Herald. He is a frequent guest on financial television programs such as The Keiser Report as well as radio shows like the Schiff Report. Source
Posted by Angelo Agathangelou at 4:13 pm No comments: Links to this post

Morris: Universally known as an honourable man, now injured while in custody. And facing numerous appearances in kangaroo like courts. From Wikipedia: Abuzed Omar Dorda (Arabic: أبو زيد عمر دوردة‎) (born 4 April 1944) was General Secretary of the People's Committee (Prime Minister) of Libya from 7 October 1990 to 29 January 1994, and as Libya's Permanent Representative to the United Nations from 1997 to 2003. Source

Posted by Angelo Agathangelou at 3:58 pm No comments: Links to this post

SilverFuturist: "Dollar" not defined on purpose? + Silver up a buck on "grave concern"


Edwin Vieira Jr.: What Is a Dollar? http://www.thefreemanonline.org/columns/what-is-a-dollar/

Read more »
Posted by Angelo Agathangelou at 2:23 pm No comments: Links to this post

Debtors' Prison Is Back - and Just as Cruel as Ever 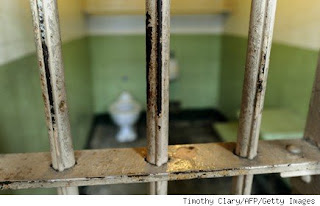 By Ross Kenneth Urken: To most of us, "debtors' prison" sounds like an archaic institution, something straight out of a Dickens novel. But the idea of jailing people who can't pay what they owe is alive and well in 21st-century America.

According to a report in The Wall Street Journal, debt collectors in Missouri, Illinois, Alabama and other states are using a legal loophole to justify jailing poor citizens who legitimately cannot pay their debts.

Here's how clever payday lenders work the system in Missouri -- where, it should be noted, jailing someone for unpaid debts is illegal under the state constitution.

First, explains St. Louis Post-Dispatch, the creditor gets a judgment in civil court that a debtor hasn't paid a sum that he owes. Then, the debtor is summoned to court for an "examination": a review of their financial assets.

If the debtor fails to show up for the examination -- as often happens in such cases -- the creditor can ask for a "body attachment" -- essentially, a warrant for the debtor's arrest. At that point, the police can haul the debtor in and jail them until there's a court hearing, or until they pay the bond. No coincidence, the bond is usually set at the amount of the original debt.

Read more »
Posted by Angelo Agathangelou at 1:30 pm No comments: Links to this post

IT'S OFFICIAL: Keep Your Money In This System & LOSE It All - Susanne Posel

PART 1 of 2: Writer & researcher Susanne Posel of Occupycorporatism.com joins SGT for an in-depth conversation about the recent court rulings declaring it LAWFUL for banks to use YOUR money to pay THEIR debts and bad bets. It's all in place now with legal precedent, so if you lose your money to these banks in the future, just remember YOU WERE WARNED.

PART 2 of 2: Writer & researcher Susanne Posel of Occupycorporatism.com says the global "Elite" doesn't really care about your "money", they PRINT the money! What they are after is your SOVEREIGN debt - your land and the land of your entire country, pledged to them FOREVER. Source

Posted by Angelo Agathangelou at 11:41 am No comments: Links to this post

Congressman Walter Jones: It's TIme to Bring Our Troops Home

Congressman Walter B. Jones, who introduced House Concurrent Resolution 107, calling for the impeachment of Obama if he attacks Iran or Syria without prior and clear authorization of an Act of Congress. Source
Posted by Angelo Agathangelou at 7:24 am No comments: Links to this post

By Madison Ruppert: The video camera in a patrol car captured a scuffle between officers of the Los Angeles Police Department (LAPD) and 35-year-old mother Alesia Thomas on July 22. During the altercation Thomas allegedly sustained a genital kick in the process of forcing her in the back of the patrol car, after which she died of suffocation.
This is one of the relatively infrequent situations where the so-called “dash cams” in police cars have resulted in an atrocity being exposed which might otherwise never be known by the public, somewhat like the case early this year involving the beating of a 66-year-old man for no apparent reason.
Unfortunately, in that case, the officer responsible was only held accountable for attempting to turn off the camera in order to cover up his actions. Thankfully it appears that this case will result in a more thorough investigation.
According to the Los Angeles Times, at least five LAPD officers are currently under investigation over the incident which occurred in South Los Angeles.
Police officials confirmed that the officers stomped “on her genital area” in addition to “the use of additional force by others to take her into custody.”
Thomas was forcibly placed in the back of the police car and she can be seen on the video breathing shallowly and not long after she stopped breathing completely.
LAPD Commander Bob Green was contacted by the Los Angeles Times and confirmed that while one officer was attempting to get Thomas into the patrol car, a threat to kick Thomas in the genitals was issued and soon after the officer followed through on the threat. 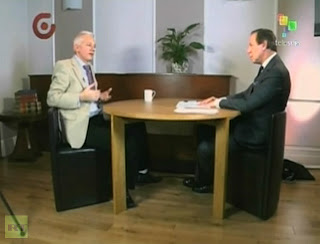 The West’s “perverse” empire is leading to the collapse of human rights, WikiLeaks founder Julian Assange said. The whistleblower, currently holed up in the UK’s Ecuadorian embassy, expects to leave in a year if Sweden drops its case against him.
"The Swedish government could drop the case. I think this is the most likely scenario. Maybe after a thorough investigation of what happened they could drop the case,” Assange said, adding that he hopes his case will be solved through diplomacy “in between six and 12 months.”
During the interview with Venezuelan TV station teleSUR from London’s Ecuadorian Embassy, Assange condemned an “avalanche of totalitarianism” incited by the US government. He argued that democracy in Western countries is an illusion, and that the constant surveillance of citizens is leading to the creation of a “transnational totalitarian state.”
“This is an international phenomenon that isn’t just happening in the US, it’s bigger than the US and it’s taking us to a dark place,” Assange said. He alleged that human rights in the West are undergoing a severe deterioration, and that the public is being influenced by “massive press manipulation.”

Read more »
Posted by Angelo Agathangelou at 1:37 am No comments: Links to this post

Military TV Muppet urges Israelis to prepare for strike on Iran + Top US military commander: 'I don't want to be complicit' if Israel attacks Iran 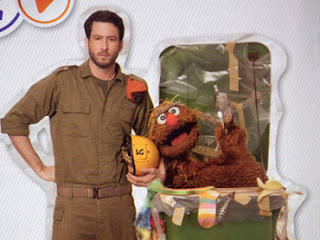 A new emergency pamphlet in Israel instructs residents to prepare for the worst if Tel Aviv conducts a military strike on Iran. But the face on the brochure isn’t the country’s President or Prime Minister – it’s a Muppet.
The cover of the 15-page leaflet pictures a smiling Moishe Oofnik, the Israeli Muppet version of Oscar the Grouch. He’s the resident pessimist on Rechov Sumsum, Israel’s co-production of the long-running American children’s program ‘Sesame Street.’
Muppets on the popular show are known for teaching children numbers and the alphabet, but Moishe Oofnik has taken on a different job with this pamphlet – instructing Israelis how to react if their nation’s government launches a war against Iran.
The booklet, issued by the Israeli military, says that once air raid sirens sound, residents of the Jewish state would have between 30 seconds and three minutes to find cover before rockets hit their area. The brochure, which is being distributed across the country, also teaches Israelis how to prepare a safe room or shelter for emergency situations.