We Are Now One Year Away From Global Riots, Complex Systems Theorists Say 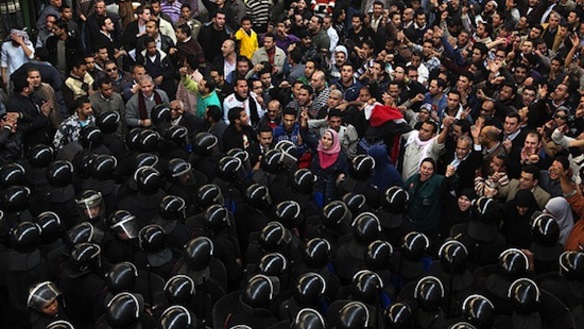 By Brian_Merchant: What’s the number one reason we riot? The plausible, justifiable motivations of trampled-upon humanfolk to fight back are many—poverty, oppression, disenfranchisement, etc—but the big one is more primal than any of the above. It’s hunger, plain and simple. If there’s a single factor that reliably sparks social unrest, it’s food becoming too scarce or too expensive. So argues a group of complex systems theorists in Cambridge, and it makes sense.
In a 2011 paper, researchers at the Complex Systems Institute unveiled a model that accurately explained why the waves of unrest that swept the world in 2008 and 2011 crashed when they did. The number one determinant was soaring food prices. Their model identified a precise threshold for global food prices that, if breached, would lead to worldwide unrest.
The MIT Technology Review explains how CSI’s model works: “The evidence comes from two sources. The first is data gathered by the United Nations that plots the price of food against time, the so-called food price index of the Food and Agriculture Organisation of the UN. The second is the date of riots around the world, whatever their cause.” Plot the data, and it looks like this:

LAWS OF THE BEAST – SECRET JEWISH NOAHIDE LAWS Of The US: NOW THE GOVERNMENT CAN LEGALLY KILL CHRISTIANS – Bill Dannemeyer U.S. Congressman, 1979-1992 ?????

Your U.S. government can now legally kill Christians for the “crime” of worshipping Jesus Christ!??? A diabolic deception has been perpetrated on the American people by their OWN leaders, Senators and Congressmen, who have sold their soul to the devil.
On March 5, 1991, in the House of Representatives, and March 7, 1991, in the U.S. Senate, without any knowledge of, or input by, the people of the United States, U.S. Senators and Congressmen passed a law that is so outrageous – and frankly unconstitutional – that it forces the American people to be bound by a set of monstrous rules, called the Noahide Laws, rules that make the belief in Jesus Christ a crime punishable by decapitation by guillotine!
On March 20, 1991, President George H.W. Bush, a supposed Christian, signed the bill into law.
Before you respond, “NO, that cannot be – not in our free country!” let me explain.
The passage of this law, HJ Res. 104, is especially troublesome to me because I was a member of the U.S. House of Representatives at the time it was passed. Even worse, I was in the House Chamber the very day that is was passed, voting on other legislation. Yet I, as a U.S. Congressman, had NO KNOWLEDGE that it had been passed or even that it was to be brought up for a vote.
How could this be? How could the deception be so pervasive that those of us who had sworn to uphold our country’s Constitution, particularly those of us (few, indeed) who really took our position seriously as the protectors of the people, could be totally in the dark regarding the content of this bill and its passage by the leaders of this country – by treachery and deceit?
Here’s how it happened!

“Our society is run by insane people for insane objectives. I think we're being run by maniacs for maniacal ends and I think I'm liable to be put away as insane for expressing that. That's what's insane about it.” – John Lennon, before his murder by CIA mind-control subject Mark David Chapman
When Gandhi was asked his opinion of Western civilization he said it would be a good idea. But that oft-cited quote, is misleading, assuming as it does that civilization is an unmitigated blessing.
Civilized people, we are told, live peacefully and cooperatively with their fellows, sharing the necessary labour in order to obtain the leisure to develop arts and sciences. And while that would be a good idea, it is not a good description of what has been going on in the so-called advanced cultures during the past 8,000 years.

Civilization, as we know it, is largely the creation of psychopaths. All civilizations, our own included, have been based on slavery and “warfare.” Incidentally, the latter term is a euphemism for mass murder.

The prevailing recipe for civilization is simple:

1) Use lies and brainwashing to create an army of controlled, systematic mass murderers;
2) Use that army to enslave large numbers of people (i.e. seize control of their labour power and its fruits);
3) Use that slave labour power to improve the brainwashing process (by using the economic surplus to employ scribes, priests, and PR men). Then go back to step one and repeat the process.

Read more »
Posted by Angelo Agathangelou at 7:23 pm No comments: Links to this post

Dr. Corsi is a columnist at WND.Com. He’s here to discuss his new book:
http://www.amazon.com/The-Great-Oil-Conspiracy-ebook/dp/B007VDECJ4
(1) Dr. Corsi believes that oil is abiotic and not a fossil fuel.
(2) He claims that the peak oil theory is misguided.
(3) He discusses how the U.S. govt has suppressed this info from the public, yet which was used by the Nazi’s.

Posted by Angelo Agathangelou at 6:03 pm No comments: Links to this post

By James Corbett: The sheer absurdity of the spectacle of the modern electoral process is nowhere more apparent than in the American presidential race.
Just like the Olympic games, every four years the presidential election comes around to distract and entertain the masses, and, just like the Olympic games, the proceedings are accompanied by much pomp, ceremony and pageantry and almost nothing at all of substance.

US Diplomats Killed: Violence on rise in post faux-revolution AKA 'the west's pillage of' Libya

The US ambassador to Libya and three other Americans were killed when local militia assaulted Washington's consulate in Benghazi. President Barack Obama has condemned the attack.
Reports from various sources paint an unclear picture of the circumstances surrounding Ambassador John Christopher Steven's death.
A group of extremist militia members stormed Benghazi's US consulate on Tuesday night. Stevens may not have been killed in the Tuesday night assault, however, but rather when a second mob attacked his motorcade as it was leaving Benghazi Wednesday morning, the Guardian said.
Libyan officials alleged that Islamist militants fired rockets at Steven's car, killing him and three other embassy staffers. Witnesses cited by local media claimed that members of the hardline Islamist group Ansar Al-Sharia were among the ranks of the attackers.

Read more »
Posted by Angelo Agathangelou at 2:17 pm No comments: Links to this post

"Keiser and his wife have refused!"
Before getting to the links, let’s get to the free book! Join Liberty Classroom by the end of September 2012 and choose from either Nullification, Rollback, or 33 Questions About American History You’re Not Supposed to Ask. Once you sign up, use our contact form to send us your mailing address and your book preference, and I’ll get a signed and personalized copy out to you right away.

Secretary of Defense Leon Panetta said Tuesday that if Iran decides to build a nuclear weapon the United States will take military action.

Defense Secretary Panetta at the Flight 93 National Memorial in Shanksville, Pennsylvania, on September 10, 2012. "We have the forces in place to be able to not only defend ourselves, but to do what we have to do to try to stop them from developing nuclear weapons," he said.

Despite evidence to the contrary, the United States and Israel claim they believe the Islamic Republic is working toward building a nuclear weapon. Israel has repeatedly threatened to attack Iran and has criticized the U.S. for fence-sitting.

By Madison Ruppert: The President of the Italian Supreme Court, Fernando Imposimato, has reportedly called for a criminal investigation into the tragic attacks on September 11, 2001 and even went as far as to draw connections between historical “false flag” incidents such as those organized by the Central Intelligence Agency (CIA) in Italy as part of Operation Gladio (which some claim has reared its ugly head once more).
In a quite vitriolic letter published by the Journal of 9/11 Studies, Imposimato pulls no punches, opening the letter with the searing statement, “The 9/11 attacks were a global state terror operation permitted by the administration of the USA, which had foreknowledge of the operation yet remained intentionally unresponsive in order to make war against Afghanistan and Iraq.”
“To put it briefly, the 9/11 events were an instance of the strategy of tension enacted by political and economic powers in the USA to seek advantages for the oil and arms industries,” wrote Imposimato.
Imposimato is no stranger to high-profile cases, having served on the Anti-Mafia Commission during three different administrations, investigating the assassination of Italian Prime Minister Aldo Moro along with the attempted assassination of Pope John Paul II.
In calling the 9/11 attacks an instance of the strategy of tension, or strategia della tensione, Imposimato is linking them to the decades of brutal violence carried out by Western intelligence agencies and their agents throughout the Mediterranean.

As The Slog predicted, the Troika is about to accuse the Greeks of holding out on so-called savings. Is Pandora’s box about to be jemmied open? 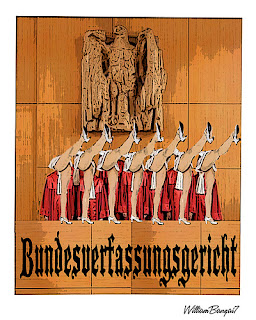 Only around 6 billion of the €11.5 billion in spending cuts calculated by the Greek government has been deemed realistic by the Troika. The triad of bondholders, ECB and IMF is now rumoured to be demanding immediate public sector sackings to enable Athens to make up the shortfall.
This is going to set an ambush of tigers loose among the European pigeons. On the one hand we have Merkel fessing up to the potential disaster of Grexit (and thus she won’t allow it) in the context of a German electorate already pissed off with what it sees as Greek perfidy. And on the other we have Bankfurt plus Lens Weidmann predicting that exactly this sort of thing was bound to happen…and will one day bankrupt the Bundesrepublik.
Representatives of the European Central Bank, the European Commission
and the International Monetary Fund met with Prime Minister Antonis
Samaras on Monday and ‘informed him of their scepticism about some of the
coalition’s measures’, although Samaras had known for some time of the suspicions. For those who are awake, The Slog reported some time ago how, at the root of this, there is a strong suspicion within the Troika that the Greek negotiators are holding back secret funds against what increasingly look like many upcoming rainy days.