Posted by Angelo Agathangelou at 11:24 pm No comments: Links to this post


Mercenary Police fired tear gas as angry protesters clashed with officers in Athens as thousands rallied in the Greek capital in protest against German Chancellor Angela Merkel’s visit. Merkel is in Athens for austerity talks with the country's Prime Minister.
­Angry protesters picked stones from the cracked pavement and hurled them at police. AFP estimated that at least 25,000 people turned out to express their anger at Greece’s austerity policies.
Demonstrators hoisted banners reading, “Merkel out, Greece is not your colony” and “This is not a European Union, it's slavery.”
Teachers, doctors and other public employees went on strike Tuesday, taking to the streets of Athens alongside trade unions and opposition political parties. Many Greeks say they cannot take more of the wage cuts and tax hikes that have left every fourth person in the public sector jobless.
“They've turned our lives into hell,” one the protesters told Reuters. “We don't want [Merkel] here.”

At least 40 people were detained near Syntagma Square, including students and members of a ‘Solidarity Network’ protest bloc, seen with banners and megaphones, Athens News reported. Local officials did not confirm the number of arrests.
Two Nazi flags were set on fire near parliament as demonstrators chanted, “No to the Fourth Reich!”

'Cuddly Ken Livingston, Fake left winger with his nose up the but crack of the city, whitewashing for the banksters!' Max Keiser and Stacy Herbert discuss whether it's time to start loving bankers as former Mayor Ken Livingstone suggests and they also wonder if the flying naked short selling witch caught by religious police in Saudi Arabia is, in fact, Blythe Masters covering an oil trade. In the second half of the show, Max Keiser talks to Aston Walker - aka the Birmingham Looter - about whether he was ever offered a deferred prosecution agreement for his crime of looting during the 2011 riots and ask whether he would have been granted immunity had he offered the loot as an infinitely rehypothecated collateralized looted H&M clothes bonds. Source

Posted by Angelo Agathangelou at 9:46 pm No comments: Links to this post

By John Melloy: A single mysterious computer program that placed orders — and then subsequently canceled them — made up 4 percent of all quote traffic in the U.S. stock market last week, according to the top tracker of high-frequency trading activity. The motive of the algorithm is still unclear.

The program placed orders in 25-millisecond bursts involving about 500 stocks, according to Nanex, a market data firm. The algorithm never executed a single trade, and it abruptly ended at about 10:30 a.m. ET Friday.
“Just goes to show you how just one person can have such an outsized impact on the market,” said Eric Hunsader, head of Nanex and the No. 1 detector of trading anomalies watching Wall Street today. “Exchanges are just not monitoring it.”
Hunsader’s sonar picked up that this was a single high-frequency trader after seeing the program’s pattern (200 fake quotes, then 400, then 1,000) repeated over and over. Also, it was being routed from the same place, the Nasdaq [COMP  3067.56


“My guess is that the algo was testing the market, as high-frequency frequently does,” says Jon Najarian, co-founder of TradeMonster.com. “As soon as they add bandwidth, the HFT crowd sees how quickly they can top out to create latency.” (Read More: Unclear What Caused Kraft Spike: Nanex Founder.)
Translation: The ultimate goal of many of these programs is to gum up the system so it slows down the quote feed to others and allows the computer traders (with their co-located servers at the exchanges) to gain a money-making arbitrage opportunity.
Read more »
Posted by Angelo Agathangelou at 5:13 pm No comments: Links to this post

Why a gold standard, alone, is not enough 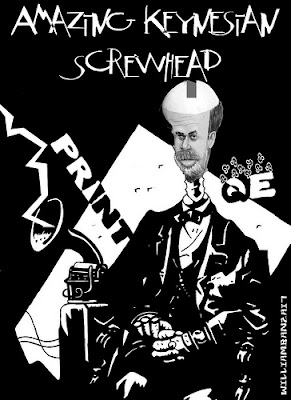 Martin Sibileau: …The Argentine case and the Dutch Golden Age suggest that the elimination of the credit multiplier (i.e. extinction of shadow banking) is more important than the asset backing a currency…
Please, click here to read this article in pdf format: October 8 2012
As we pointed in our last letter, we have lately noticed that there is an ongoing debate on whether (or not) the world can again embrace the gold standard. We join the debate today, with an historical as well as technical perspective. Today’s letter will deal with the historic part of the discussion. In the process, you will see that we side with some popular ideas, while we challenge others.
The gold standard will be the last option: If adopted, it will be out of necessity and in desperation
We are not historians. In our limited knowledge, we note however that historically, the experiment of adopting a gold standard –or a currency board system- was usually preceded by extremely trying moments, including the loss by a government of its legal tender amidst hyperinflation.
The change to a commodity standard has often been then out of necessity. We witnessed one of these episodes first-hand, in Argentina, back in 1991. The local currency was decreed convertible into US dollars (i.e. a currency board) at a rate of 10,000 to 1, and assigned a new name: peso argentino. The method with which this was carried out challenges the current speculation regarding gold, according to which gold bullion would be confiscated, in order to provide reserves to a central bank daring to return to the gold standard. In Argentina, US dollars were not confiscated to back the peso. There was no need do that. On the same grounds, we don’t think gold would need to be confiscated, although one must never, ever underestimate stupidity.
Read more »
Posted by Angelo Agathangelou at 2:53 pm No comments: Links to this post

Submitted by Tyler Durden: While we have grown 'used' to hearing of protests in several European peripheral nations, South Africa has turned the anti-austerity protest amplifier to 11 in recent days. From the Lonmin massacre and subsequent wage increase to the truck-drivers' strike and Amplats firing of 12,000 workers , Reuters is reporting that South Africa's local government worker's union has now said it will join a nationwide strike amid the labor unrest in the mining sector. Demanding 'market-related salaries' this strike would bring the South African economy to its knees - at a time of rising deficit concerns. Critically, this has dramatic repercussions. Since firing people is no longer an option as "Those who are dismissed will make sure that there will be no operations operating and that will cause a massacre just like at Marikana," some companies will be forced out of business (reducing supply) or suffer significant margin compression on cost increases leaving commodity producers struggling - which will inevitably mean prices for end-users will rise (slowing end-user demand or crushing their margins). It seems the South African labor unions found the M.A.D. card.
Via Reuters South Africa,


JOHANNESBURG (Reuters) - South Africa's local government workers' union said on Monday it would launch a strike over pay in the next few days, the first sign of a wave of labour unrest in Africa's biggest economy spreading from the mines into the public sector.

Since August, close to 100,000 workers, including 75,000 in the mining sector, have downed tools in often illegal and violent protests that look likely to hit growth this year and undermine the government's efforts to cut its budget deficit.

Read more »
Posted by Angelo Agathangelou at 10:48 am No comments: Links to this post

Greetings Government of Greece, we are Anonymous.
We are watching events in Greece and we are really overwhelmed.
4 thousand suicides, 2 million unemployed, 5 hundred thousand homeless, hospitals without the necessary materials, salaries and pensions at risk of hunger and we can go one. And the only thing to you do is indifference. Challenging your people by inviting Merkel, right now it in collaboration with your Greeks arrived on the verge of destitution. You should be ashamed! Threaten your people with security measures only fit keeper status. 8 thousand policemen, stainless steel fences, frogmen sewers, all security forces on alert and curfew on the capital's streets ... Where differ you exactly from a Junta! The people protested and apparently you fear your own people.
We, as Anonymous are next to the Greeks claiming their freedom.

Read more »
Posted by Angelo Agathangelou at 9:37 am No comments: Links to this post

Submitted by Tyler Durden: Europe just can't catch a break these days. While French Fitch naturally came out earlier with a AAA rating and a stable outlook, it is Moody's, which has yet to follow through in S&P's footsteps 14 months later and tell the truth about America's AAA rating, that moments ago spoiled the ESM "inauguration" party by branding it AAA, but with a Negative outlook. So much for the most 'supersecure' CDO on earth: looks like we are not the only ones to assign comical value to the ESM's €80 billion first loss "Paid-in" tranche. Because that 12% in buffered protection can disappear very quick if and when the central planners lose control.
From Moodys: 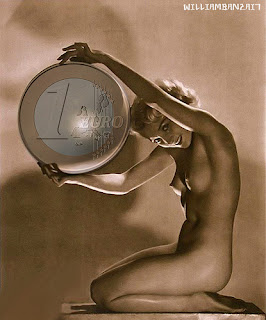 The Aaa/Prime-1 ratings are based on (i) the ESM's anticipated low leverage, (ii) the creditworthiness of the ESM's members which are also the euro area member states, (iii) the sound liquidity and capital management policy with an Early Warning System (EWS) which ensures that funds will be available on time, and (iv) the ESM's preferred creditor status. The ESM's purpose is to provide an inter-governmental support mechanism which extends financial assistance to members that are either unable to access the capital markets, or able to do so only at very high interest rates.

Posted by Angelo Agathangelou at 2:44 am No comments: Links to this post

Shadowstats.com Author John Williams wonders if politics are at play behind the latest jobs report, which shows 114,000 new U.S. jobs since September and a 0.3% drop in unemployment since August. Investors need to know how seasonal factors and month-to-month volatility affect the Bureau of Labor Statistics' reports. In this exclusive interview with The Gold Report, Williams explains why he doubts that we are in a recovery. The take-away? Look at the unadjusted figures before you sell your gold.
The Gold Report: John, as Mark Twain famously quipped, "There are three kinds of lies: lies, damned lies and statistics." The Bureau of Labor Statistics (BLS) just came out with new jobs numbers that show the country added 114,000 jobs since September and the unemployment rate dropped to 7.8%, down from 8.1% in August. On Shadowstats.com, you argue that the numbers are wrong and pointed to politics as a possible reason for the incorrect figures. Are unemployment statistics being manipulated and if so how?
John Williams: I normally put out a commentary on the numbers, and, in this one, I raised the possibility of politics as a factor. The problem is very serious misreporting of the numbers and the result is what appears to be a bogus unemployment rate. The BLS reported a drop in the unemployment rate from 8.1% to 7.8%, three-tenths of a percentage point, which runs counter to what is being experienced in the marketplace.
What few people realize is that the headline unemployment rate is calculated each month using a unique set of seasonal adjustments.