Posted by Angelo Agathangelou at 9:32 pm No comments: Links to this post

Global warming stopped 16 years ago, reveals Met Office report quietly released... and here is the chart to prove it

By David Rose: The world stopped getting warmer almost 16 years ago, according to new data released last week. The figures, which have triggered debate among climate scientists, reveal that from the beginning of 1997 until August 2012, there was no discernible rise in aggregate global temperatures.
This means that the ‘plateau’ or ‘pause’ in global warming has now lasted for about the same time as the previous period when temperatures rose, 1980 to 1996. Before that, temperatures had been stable or declining for about 40 years. Read more »
Posted by Angelo Agathangelou at 3:59 pm No comments: Links to this post 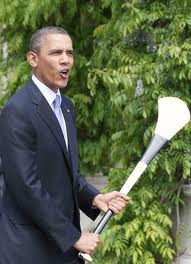 By Eileen Dublin: The radio is chocker full of talk back talking about financial war and middle class hakles are raised while hurleys are being polished.(Right: Obama at Hurley tryouts)


We only deserve it if we take it. There was another occasion in history when Ireland was destroyed because of the economic orthodoxy of another country and that was the famine. Have you ever wondered how they put up with it or what you would have done in their position. We are about to find out. This is the most serious injustice done to us since the famine and while we won’t starve we will see mass-immigration and we still won’t be able to pay the debt. It’s a lunatic policy to even try. No more. If FG/Lab can’t do what is required then they should resign now.
simeongrimes
So while Time magazine and others eulogize the plucky leader of the Irish people, the truth is that Enda Kenny leads a Vichy government—captive externally to creditors that still insist on loading bank debt onto the sovereign, and internally to a tribe of insiders led by union godfathers in a deal that protects the government’s own excessive pay and pensions while bankers lean over its shoulders to rewrite insolvency laws.
This isn’t just crony capitalism. It’s crony democracy.

The prime suspect in the death of Ambassador Stevens and his three colleagues is Sufyan Bin Qumu, an obvious US double agent who spent several years in Guatnanmo and who doubtless swore eternal obedience to the CIA to get released. Reports have now emerged of a 12-person CIA security team stationed near the US consulate in Benghazi which failed to intervene to defend US diplomats.

Read more »
Posted by Angelo Agathangelou at 12:50 pm No comments: Links to this post 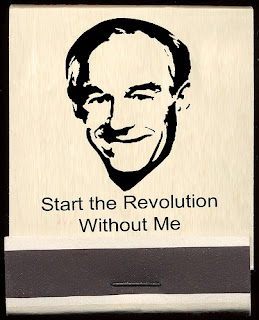 Readers may recall that Ron Paul once surprised everyone with a seemingly very elegant proposal to bring the debt ceiling wrangle to a close. If you're all so worried about the federal deficit and the debt ceiling, so Paul asked, then why doesn't the treasury simply cancel the treasury bonds held by the Fed? After all, the Fed is a government organization as well, so it could well be argued that the government literally owes the money to itself. He even introduced a bill which if adopted, would have led to the cancellation of $1.6 trillion in federal debt held by the Fed.
Paul argued that given the fact that the Fed had simply created the money to buy the bonds from thin air, no-one would be hurt by this selective default. Moreover, he reckoned that this would likely neuter the Fed and make it less likely to manipulate the money supply in the future – if it could no longer rely on the treasury honoring its debt, there would be no point in buying more of it. He also considered the Fed's 'exit' talk to be spurious: the inflation of the money supply its bond buying had inaugurated would likely never be reversed anyway (we agree on this point).
Of course the proposal was not really meant to be taken serious: rather, it was meant to highlight the absurdities of the modern-day monetary system. Paul himself pointed out in subsequent interviews that the proposal would naturally never be adopted. In short, it was essentially an educational foray on his part -  he wanted to encourage people to think. Ron Paul has always been an exception among politicians – he regarded educating people about monetary policy matters as part of his remit.
Read more »
Posted by Angelo Agathangelou at 11:15 am No comments: Links to this post

The Gold Rush: why are we not being told the truth?

By Richard Cottrell: We are now approaching one of the most important tipping points in world history and yet we stagger on, besotted by iPhones and other electronic brain frying clutter in the expectation that things being as they are will remain the same in the future.

One can assume that the people of Hiroshima and Dresden thought that too, before they were toasted to a crisp by the latest advances in peace-keeping technology.
The entire new world order that kicked off with Bretton Woods in 1944 and then spread like a global rash – the World Bank, the IMF, the European Union – is now playing one of the most pointless mind games since our ancient ancestors taught themselves how to work markets with systems of exchange. Forms of money made barter largely redundant. In came precious metals, and especially gold.
The bright shiny stuff was not, of course, easily portable in large quantities. So it was stocked up in treasury houses and money minted according to the value of those reserves judged against the general credit stakes of any given country.
When we read that this, that, or the other country – the US included – is ‘off’ the gold standard, this is nonsense. Nixon took the US ‘off’ the gold standard in 1971 after a caretaker checked one bright morning and found there was nothing left to actually get off.
From that moment on the dollar was consigned to its inevitable fate as a paper fiat currency, supported by other countries with large gold hoards stored at home, or as invariably became the case, in the vaults of the US Federal Reserve.
Editor’s note: The Federal Reserve has formally admitted that they do not, in fact, “officially” own any gold and have not owned gold in some time. See the testimony below: 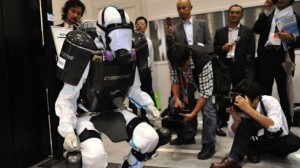 By Madison Ruppert: Contrary to popular belief, the horrific nuclear disaster at Fukushima is far from over. Indeed, as Agence France-Presse (AFP) points out, “The decommissioning of the crippled plant is expected to take several decades.”
However, the “profoundly man-made” disaster at Fukushima and the dangers associated with the ongoing cleanup effort could be mitigated, at least in part, by robotic suits controlled by the brain waves of the operator known as the Hybrid Assistive Limb (HAL).
It is worth noting that the true state of the Fukushima plant remains largely mysterious because outside experts are not allowed to actually inspect the plant and give an independent report on the status of the reactors. Furthermore, the spent fuel rods in the pool at reactor four – which are currently in a precarious state – will not be moved until late next year.
HAL is outfitted with a network of sensors that pick up the electrical signals from the operator’s brain thus synchronizing the movement of the robot’s limbs with those of the wearer.
On a somewhat humorous note, HAL not only shares the name of the truly evil supercomputer in “2001: A Space Odyssey” but also is being developed by Cyberdyne, the fictional company that made the Terminator robot in the 1984 “Terminator” film.

Read more »
Posted by Angelo Agathangelou at 7:01 am No comments: Links to this post

By Wolf Richter: Mass violence is just about a daily occurrence in Nigeria. This week, for example, “at least” 24 people were killed in Maiduguri, a city of over 1 million people in Borno State, north-eastern Nigeria, when the military skirmished with the radical Islamist sect Boko Haram. On Wednesday, a bomb exploded in Potiskum, a city of 200,000 people, in Yobe State, killing a police officer. Boko Haram likely targeted the military, which responded with door-to-door searches and burned down “at least” four houses. Gunshots were fired throughout the day. The same day, police disclosed that “at least” 30 people were killed in Benue State in Central Nigeria, when nomadic Muslim herdsmen attacked a village of Christian Tiv people.
The oil industry in the Niger Delta hasn’t been spared either. Nigeria is the largest oil producer in Africa and has the ninth largest proven natural gas reserves in the world. Oil accounts for 95% of its export income and 40% of its government revenues. The sector currently produces about 2.13 million barrels per day (bbl/d), though it has the capacity to produce over 3 million bbl/d, if it weren’t for this nightmarish scenario—described in the dry manner of the US Energy Information Agency:


Local groups seeking a share of the oil wealth often attack the oil infrastructure and staff, forcing companies to declare force majeure on oil shipments. At the same time, oil theft, commonly referred to as “bunkering,” leads to pipeline damage that is often severe, causing loss of production, pollution, and forcing companies to shut-in production.

Submitted by Tyler Durden: If a recently proposed law by the director general of Spanish police, Ignacio Cosidó, is actually enacted, it is likely that live (or replayed) webcasts, photos and any electronic recordings such as those seen recently from the Madrid anti-sovereignty riots may be a thing of the past. But not because they no longer exist: simply because very soon it may be illegal to actually record said events. El Pais reports that "authorities are studying the possibility that the next update to the Public Security Law could include an article prohibiting the recording, processing or circulation on the internet of police officers performing their duties, if doing so would endanger them or the operation in which they were engaged." These are the same riot cops who typically wear gas masks, and full riot attire and shields precisely to preserve their identity. But facts matter little when the liquidity tide is going out and all the Ponzi schemes are exposed to have been swimming naked. For now, Spain will be happy to little by little strip its citizens first of their rights to free expression, then all other rights, as it slowly but surely sells the country into Troika slavery.

Read more »
Posted by Angelo Agathangelou at 2:02 am No comments: Links to this post

Submitted by Tyler Durden: These giants boast the world's largest economies and active militaries with their decisions influencing politics at a global level. Despite a massive trade agreement and many diplomatic meetings, the two nations struggle to maintain the semblance of a civil relationship. As pressure mounts from US leaders, China remains unfazed, coolly growing its military and economy. Master-of-Finance-Degrees provides the ultimate infographic of how these two titans of industry and power measure up when pitted head-to-head. Guess who wins?