Posted by Angelo Agathangelou at 11:55 pm No comments: Links to this post

Why are we bailing out the banks? – Part Four – What happens now? "Fire-Sale Fire-Storm!!!" 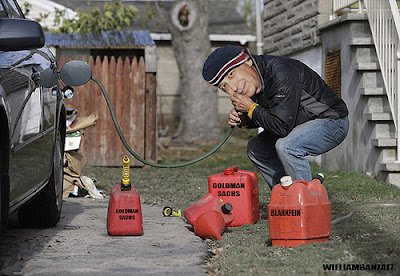 By Golum XIV: In part one of this series I suggested that the simple reason we were bailing out the banks and simultaneously cutting public spending was because,

If the banks were to be wound up it is their [the wealthiest 10%'s] credit/debt backed ‘money and the assets held in it, which would burn to ash….So the simple reason our rulers insist on bailing out the banks is that by doing so the wealthy and the powerful are simply bailing out themselves and guaranteeing the continuation of a system which suits them perfectly.

In part two I argued that while the simple selfishness answer is true there are also theoretical justifications (albeit flawed ones) for the bail and cut policy.


The two aspects of their policy ‘bail and cut’, they will insist are not contradictory at all. Simply put, they will say they are loosening or increasing the  money supply (QE) in order to invest in growth (classic Keynesian) while simultaneously cutting those expenditures which they feel do not generate growth and which are in fact ‘drains’ on productivity – in their view any ‘public’ expenditure (Classic Free-market). Growth, for them, equals the free-market/private sector, while drains on growth equal government, public spending….Basically – Private Debt good, Public Debt bad.

I argued that one of the legion problems with this world view is the fact that whatever the ideology says should happen, the reality is that giving money to the banks for them to invest has simply not worked. It was never going to work because it is founded on a misapprehension about the nature and business of modern banks.

By Michelle Martin: Germany's private sector shrank for a sixth straight month in October and industrial orders fell at their sharpest rate in a year, data showed on Tuesday, highlighting the heavy toll the euro zone crisis is taking on Europe's largest economy. 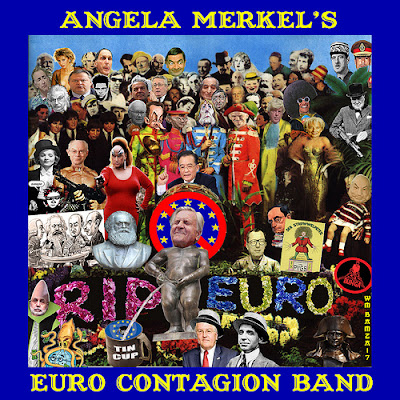 Tuesday's figures were the latest in a string of data that has sparked talk of recession by indicating that Germany, Europe's economic powerhouse and growth engine, is losing momentum three years into the euro zone's sovereign debt crisis.
Markit's composite Purchasing Managers' Index (PMI), tracking activity in manufacturing and services, fell more than forecast to 47.7 in October from 49.2 in September, well below the 50 mark separating growth from contraction.
"At its current level, the composite PMI figure raises the likelihood of an outright GDP contraction during the final quarter of the year," Markit senior economist Tim Moore said.
"A back-to-back monthly reduction in private sector employment further suggests that the German economy is approaching the year end on a weaker footing, as lower workloads and worsening economic sentiment continue to bite," he added.

Rip It Up & Start Again! Max Keiser with Simon Rose

Max Keiser and Stacy Herbert discuss electing 'powerless' governments (Ireland)which then proceed to rip up social contracts and illegally transfer debts to private citizens, who, in turn, accept the 'moral responsibility' to keep the corporate welfare Queens rolling in their sacrosanct perks. In the second half, Max Keiser talks to Simon Rose of SaveOurSavers.co.uk about the attempt to try capitalism without capital and how the erosion of savings is costing the economy not only capital but jobs and growth. Source
Posted by Angelo Agathangelou at 5:57 pm No comments: Links to this post

V. Phani Kumar: The leadership transition expected this week at China’s Communist Party will set the stage early next year for a new generation of leaders to take the country’s reins for the next five to 10 years.
The Congress comes amid expectations that policy makers may boost fiscal and monetary stimulus in the near term. But economists at HSBC say the new leaders will almost certainly also unveil certain “big bang” directional changes that will “revolutionize” the country’s financial system.
“We think interest rates will be liberalized, the bond market will double in size, and the [yuan] will become convertible within five years,” said HSBC analysts led by China chief economist Hongbin Qu, who expect the changes to make capital allocation more efficient, boosting the private sector and providing the middle class with greater choice on investing their money.
“This should help rebalance growth from investment to consumption and lift the potential growth rate in the coming years,” they said.
“Although certain restrictions on capital inflows will likely remain, full [yuan] convertibility would take China’s financial integration with global markets to a new level and have a profound impact on both China and the world,” HSBC added. Source

Posted by Angelo Agathangelou at 11:55 am No comments: Links to this post 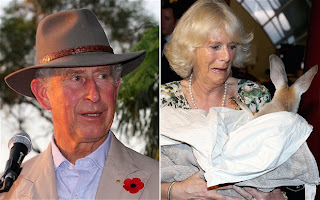 The Romanian tourist board is to use links between the British Royal family and Count Dracula to lure in UK tourists, it has emerged.

By Victoria Ward and Andrew Hough: Until now its lonely mountains have been synonymous with the legend of the vampire, the cruel ruler who drank his victims’ blood, terrified his enemies and could turn into a bat at will.
But Transylvania should also be known as the ancestral home of the Prince of Wales, defender of faiths, with a love of gardening and classical architecture, according to the Romanian National Tourist Office.
Links between the Royal Family and Vlad the Impaler, the 15th century nobleman whose deeds inspired the vampire legend, are being exploited in an attempt to lure tourists to the eastern European country.

The Romanian National Tourist Office is trumpeting the lineage in a brochure distributed at the World Travel Market, a leading industry event which opened in London on Monday.

The Prince himself appears in a video being used to promote the country in which he claims distant kinship with Vlad Tepes, the 15th–century Wallachian ruler on whom the Irish novelist Bram Stoker based his Dracula.
“Transylvania is in my blood,” he jokes in an interview first shown on satelite television last year. “The genealogy shows I am descended from Vlad the Impaler, so I do have a bit of a stake in the country.”

Read more »
Posted by Angelo Agathangelou at 10:15 am No comments: Links to this post

"You can't afford to think!" If Obama Wins 2012... America is Finished... "I am leaving the US police state where children are starving!"

Posted by Angelo Agathangelou at 9:40 am No comments: Links to this post

Lbertarian Party candidate Gov. Gary Johnson and the Green Party's Jill Stein sound off once more before Election Day, debating live. Source
Angelo: Wow. Witness the fraud that represents itself as our political systems exposed, by these real people saying what most people actually think. Even though the Green movement remains flawed. It's real, people actually think that way, so that's cool. Their hearts are in the right place and with real open debate we get a chance to change their minds with reason and real facts publicly. But for completely nailing it in his opening remarks - Gary Johnson for Prime Minister of the UK!
Posted by Angelo Agathangelou at 5:16 am No comments: Links to this post

WILL A PROPHET ASSUME COMMAND? 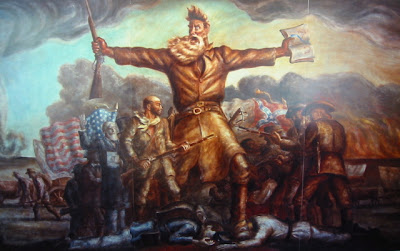 “The next Fourth Turning is due to begin shortly after the new millennium, midway through the Oh-Oh decade. Around the year 2005, a sudden spark will catalyze a Crisis mood. Remnants of the old social order will disintegrate. Political and economic trust will implode. Real hardship will beset the land, with severe distress that could involve questions of class, race, nation and empire. The very survival of the nation will feel at stake. Sometime before the year 2025, America will pass through a great gate in history, commensurate with the American Revolution, Civil War, and twin emergencies of the Great Depression and World War II.” – Strauss & Howe – The Fourth Turning
The Burning Platform: Strauss & Howe wrote these words in 1997. They had predicted the arrival of another Crisis in this time frame in their previous book Generations, written in 1990. This wasn’t guesswork on their part. They understood the dynamics of how generations interact and how the mood of the country shifts every twenty or so years based upon the generational alignment that occurs as predictably as the turning of the seasons. The last generation that lived through the entire previous Crisis from 1929 through 1946 has virtually died off. This always signals the onset of the next Fourth Turning.

Read more »
Posted by Angelo Agathangelou at 2:00 am No comments: Links to this post

A MESSAGE FROM THE QUEEN + We Are Legion: The Story of the Hacktivists - jischinger

In light of your failure in recent years to nominate competent candidates for President of the USA and thus to govern yourselves, we hereby give notice of the revocation of your independence, effective immediately. (You should look up ‘revocation’ in the Oxford English Dictionary.)
Her Sovereign Majesty Queen Elizabeth II will resume monarchical duties over all states, commonwealths, and territories (except North Dakota, which she does not fancy).
Your new Prime Minister, David Cameron, will appoint a Governor for America without the need for further elections.
Congress and the Senate will be disbanded. A questionnaire may be circulated next year to determine whether any of you noticed.
To aid in the transition to a British Crown dependency, the following rules are introduced with immediate effect:

1. The letter ‘U’ will be reinstated in words such as ‘colour,’ ‘favour,’ ‘labour’ and ‘neighbour.’ Likewise, you will learn to spell ‘doughnut’ without skipping half the letters, and the suffix ‘-ize’ will be replaced by the suffix ‘-ise.’ Generally, you will be expected to raise your vocabulary to acceptable levels. (look up ‘vocabulary’).
————————
2. Using the same twenty-seven words interspersed with filler noises such as ”like’ and ‘you know’ is an unacceptable and inefficient form of communication. There is no such thing as U.S. English. We will let Microsoft know on your behalf. The Microsoft spell-checker will be adjusted to take into account the reinstated letter ‘u” and the elimination of ‘-ize.’

Read more »
Posted by Angelo Agathangelou at 1:30 am No comments: Links to this post

Zionism In Action: Eutelsat CEO Is Yet Another Israeli Giving It To The European People Up The Shving Shving! 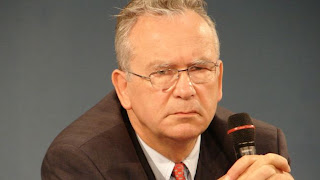 A US intelligence analyst says the French-based satellite provider Eutelsat SA is run by an Israeli citizen and is a company long dictated to by Israeli extremist groups, Press TV reports.

“Eutelsat is a person, not a company. Eutelsat says it is European, but it is actually Israeli. French sounding ‘Michel de Rosen’ runs Eutelsat, an Israeli citizen, company with Israeli stockholders, a company long dictated to by extremist groups within Israel, the militant ultra-nationalists of the Likudist regime of Netanyahu,” Gordon Duff told Press TV.

He described the company as one of the Israeli-owned “chokepoints” which are created to “make sure all communication, all progress, all privacy is subject to what is allowed.”

“When Eutelsat chose to choke off Iran and end free speech in Europe, many spoke up but none pointed a finger at Israel and their desire to paint Iran with a ‘black brush’, Duff said slamming European countries for their silence over the ban on the broadcast of Iranian satellite channels in Europe.