Posted by Angelo Agathangelou at 11:15 pm No comments:

"Mussolini would be proud!" Thoughtcrime in Britain - azizonomics

Aziz: A 19-year old man was arrested yesterday for the supposed crime of burning a Remembrance Poppy and posting a picture of the incident on Facebook.


A teenager arrested on Remembrance Sunday on suspicion of posting a picture of a burning poppy on Facebook is being questioned by police.
The 19-year-old was held after the image of a poppy being set ablaze by a lighter was reportedly posted online with the caption: “How about that you squadey cunts”.
Police said the man, from Canterbury, Kent, was detained on suspicion of an offence under the Malicious Communications Act after officers were contacted at about 4pm on Sunday.

This is simply dangerous, absurd and Orwellian.

Welcome to the Nuthouse: How Private Financial Fiat Creates a Public Farce

Farce #1: “Market value” and “free markets” have become a joke.
Farce #2: Private, self-assigned, fake value is being traded for public money at 100 cents on the dollar.
Farce #3: Printed money is backed by nothing.
Farce #4: We have a “free” enterprise system dominated by monopolies that force people to buy inferior goods and services at exorbitant rates.
Farce #5: High-level financial crimes, no matter how egregious or widespread, are not being prosecuted.
Farce #6: Risk is gone. Now there is only liability borne by citizens.
Farce #7: Productivity has been supplanted by parasitism.
Charles Hugh Smith: Today I present a deeply insightful guest essay by frequent contributor Zeus Yiamouyiannis, Ph.D. Nothing succeeds like failure when you are a big bank. We’ve already seen that. Too many articles have already been written about that.
Heads, the big banks win through their hugely profitable derivatives and other fake wealth vehicles on the way up the phony growth curve.
Tails, you, the citizen, loses as you are forced to redeem this toxic trash for real money in the form of government bailouts and Federal Reserve purchases as fake value collapses.
“O, the inhumanity, O the injustice.”
Hey, we get it. You can stop pounding the drums. Bring on Act II: “The current anti-capitalist farce and its riotous effects.”
Capitalism turned on its head
What happens to functioning capitalism when its core operating principles of value and money, risk, private property, profit, supply and demand, price discovery, transparency and accountability, productivity, and exchange of worth can selectively be erased on the whim of self-interested, politically connected players?

Read more »
Posted by Angelo Agathangelou at 9:21 pm No comments:

Submitted by Tyler Durden: China, whose military capabilities are largely mocked by the conventional wisdom, is ignoring the jeers and is rapidly building up not only its navy, but is modernizing its air force now too. Case in point: it just unviled its own military drone, which is a spitting image of the US MQ-9 Reaper, with one typical Chinese twist: it is far cheaper.
From Sky News:

"China has taken the wraps off its latest military drone and fighter plane as the country builds up its defence capabilities.

The unmanned Yi Long drone can carry two missiles and although it looks similar to the MQ-9 Reaper used by the British and US military it is likely to be priced far more cheaply.

"They know that in future wars unmanned warfare will be very important."

Read more »
Posted by Angelo Agathangelou at 8:05 pm No comments:

White House to respond after 70,000 demand secession of Texas from US

Houston, we have a problem: more than 70,000 people have signed a petition on the website of the White House asking for Texas to secede from the United States.

Less than a day after RT first reported that a petition demanding the secession of The Lone Star State from the US was on track to cross the 25,000 signature threshold to warrant an official response, the tally of people requesting the speedy removal of Texas from the United States tripled, going from 21,777 signees to 72,861 in under 24 hours.
The Texas petition was published on the White House’s official website on November 9, but wasn’t the first to ask for secession. While the request from the oil-rich home of the Alamo was published just two days after Pres. Obama was declared victorious in his quest for re-election, Louisiana was the first state to ask for an exit from the union on WhiteHouse.gov, just hours after ballots were tallied on Nov. 6. By the end of that weekend, Texas and 18 other locales had created petitions of their own, although the Lone Star State is by and large the first to cross the 25,000 signature threshold.

Read more »
Posted by Angelo Agathangelou at 6:33 pm No comments:

Max Keiser and Stacy Herbert discuss foul mouthed foreigners with banker tourettes in Singapore, while in America, traders at Barclays send each other expletive-filled emails admitting to manipulating energy prices down in order to have their big bets on declining prices pay off. They also discuss financial activists creating a rolling jubillee reverse vulture fund designed to liberate the population from unpayable debts. In the second half, Max Keiser talks to Teri Buhl about the investigation into fraud at Sun Trust Bank where whistleblowers allege the bank mis-sold mortgages to Fannie Mae, the government sponsored enterprise. Max and Teri also talk about recent developments in the case of residential mortgage back securities fraudulently sold to investors by JP Morgan's Bear Stearns holding and Teri proposes a million man march on the SEC and the NY Fed.

Many Palestinians are convinced that Arafat, whose West Bank grave is pictured here, was poisoned by Israel.
Press TV: Work has begun to exhume the body of Palestine Liberation Organization leader Yasser Arafat for a murder probe eight years after his death.

According to a Palestinian source, the exhumation process, which started on Tuesday with the removal of the mausoleum's glass and its marble tombstone, could last 15 days due to the delicate work that needs to be done by hand.

"It starts with the removal of stone and concrete and cutting the iron (framework) until they reach the soil that covers the body, which will not be removed until the arrival of the French prosecutors, Swiss experts and Russian investigators," the source said.

French investigators and Swiss experts will arrive in the West Bank on November 26 to take samples from Arafat's body. Russia will also help the investigation.

The exhumation comes after French authorities opened a murder inquiry into Arafat’s death this year after Swiss scientists found traces of polonium, a radioactive substance, on some of his belongings. Polonium is a highly toxic substance rarely found outside military and scientific circles.

Read more »
Posted by Angelo Agathangelou at 2:37 pm No comments:

"...it is only a matter of time before the entire welfare state ponzi scheme blows up."

Submitted by Tyler Durden: For all our UK readers, who hope some day to collect pension benefits, we have two messages: i) our condolences, and ii) you won't.   Why? The answer comes straight from the ONS:

The new supplementary table published by ONS in Levy (2012)10 includes the following headline figures for Government pension obligations as at end December 2010:
In summary, the estimates in the new supplementary table indicate a total Government pension obligation, at the end of December 2010, of £5.01 trillion, or 342 per cent of GDP, of which around £4.7 trillion relates to unfunded obligations.

Read more »
Posted by Angelo Agathangelou at 8:06 am No comments:

from the the-system-is-broken dept By Mike Masnick:

Ars Technica has the story on yet another patent troll -- though this one seems a bit special. TQP Development -- a typical patent troll in so many ways -- has apparently gone on something of a rampage over the last four years (and increased in the last year) suing hundreds of companies. The list is impressive. Its most recent lawsuit is against Intel and Wind River, but it's sued pretty much everyone you can think of. Apple, Google, Twitter and eBay? All sued. Target, Hertz and Mattel? Yup. The list goes on and on... and the company is able to get a bunch of companies to settle just to get rid of the lawsuit. Apparently not a single lawsuit has actually gone to trial.


1. A method for transmitting data comprising a sequence of blocks in encrypted form over a communication link from a transmitter to a receiver comprising, in combination, the steps of:

2. The method as set forth in claim 1 further including the step of altering said predetermined number of blocks each time said new key value in said first and said second sequences is produced.

Read more »
Posted by Angelo Agathangelou at 6:06 am No comments:

A la Weimar: The Bank of England has just crossed the line into Outright Government Monetizing

The Doc: Last week’s news that the Bank of England had stopped Quantitative Easing early because it was not needed was a load of rubbish.  The truth is that it was stopped early because MORE COUNTERFEITING WAS NEEDED, and the BOE figured out a way to directly monetize the debt, while out of public scrutiny.
QE will continue TO INFINITY….AND BEYOND!!!  on both sides of the pond.
The MSM story actually compares the practice to Weimar Germany.
As the Telegraph reports: 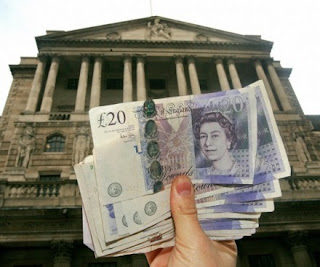 So now we know why the Bank of England’s Monetary Policy Committee called a halt to more Quantitative Easing this week – it’s because the Chancellor and the Governor of the Bank of England have concocted a backdoor way of doing the same thing.
The latest little (actually quite big at a tidy £35bn) money printing wheeze comes about as close to outright monetizing of government spending as it is possible for the Bank of England to go without simply creating the money and handing it by the lorry load to the Treasury, a la Weimar.

Read more »
Posted by Angelo Agathangelou at 5:26 am No comments: 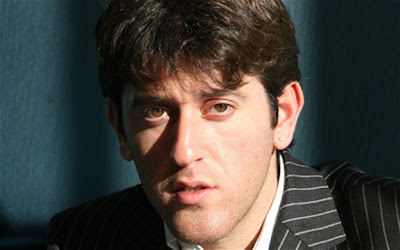 By James Hall: Last night City watchdog the Financial Services Authority (FSA) and energy regulator Ofgem both said they had launched investigations into the claims.

The FSA launched its investigation after whistleblower Seth Freedman told them he saw evidence that wholesale gas prices, used as the basis for domestic energy bills, were manipulated by some of the big power companies according to a report by the Guardian newspaper.
Mr Freedman, who worked at ICIS Heren, a firm which reports gas prices, said he saw what he took to be suspect trading on September 28, which is an important date as it marks the end of the gas industry’s financial year and can influence future prices.
He told his bosses at the firm, a so-called price reporting agency, whose energy prices are used as the basis for large supply contracts between energy firms and gas suppliers, and they alerted Ofgem.
The benchmark prices that ICIS Heren sets are crucial because energy firms base their forward-looking contracts on them. Small changes in prices can cost or save companies millions of pounds.

Allegations of price manipulation come at a sensitive time for the energy industry which has been accused of profiteering at the expense of customers.
This week millions of British gas cutomers wil see price rises averaging of 6 per cent. Other companies including Npower, SSE and Scottish power have also announced price rises.
Experts say that average household energy bills could rise by £118 to a record £1,428 next year. In 2004 the average bill was just £522.

Read more »
Posted by Angelo Agathangelou at 4:18 am No comments: