Luxembourg Is Not The Next Cyprus, Not Yet, But.... 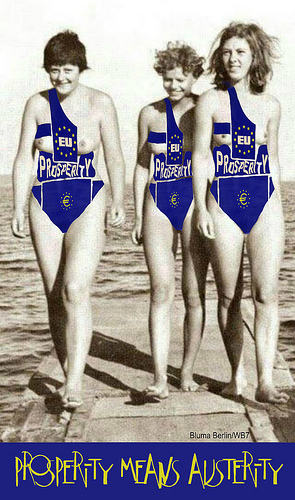 By Wolf Richter: The Grand Duchy of Luxembourg, with a population of just over half a million, smaller even than the other speck in the Eurozone, the Republic of Cyprus, ranks in the top three worldwide in per-capita GDP. In a Eurozone wealth survey, it had the highest average household wealth – €710,100. Only Cyprus, a former off-shore banking center in the Eurozone, came close. Yet Luxembourg is threatened with ruin.
It has 141 banks – bank companies, not ATMs. One bank per 3,808 people. Most of them do private banking. The financial sector added 38% to GDP in 2010 and contributed 30% to the country’s tax revenues, according to the Luxembourg Bankers’ Association (ABBL). All due to bank secrecy and tax laws. But suddenly, after Cyprus had been massacred, Luxembourg buckled.

With the big German guns, and the smaller guns from other nations, swinging in its direction, Luxembourg agreed to participate in an international automatic data-sharing arrangement that would send banking data of foreign clients to their countries, starting in 2015. Prime Minister Jean-Claude Juncker, somewhat defensively, proclaimed that lifting bank secrecy wasn’t such a big deal, that Luxembourg didn’t live from tax evasion. For the banks, the “lights won’t go out in 2015,” he said.
During the entire Eurozone bailout debacle that he presided over until February as President of the Eurogroup, he’d proven to be time and again an inveterate optimist.
“It’s expected that only 60 to 70 banks will survive in the coming years,” declared Alain Steichen, a prominent Luxembourgian tax lawyer, at a conference about the consequences of the data-sharing agreement. He should know.
Per his online profile, he “assisted Thomson in the merger acquisition of Reuters in order to form Thomson Reuters, with the group’s main holding location being Luxembourg.” He also “assisted Chase Manhattan in the merger acquisition of JP Morgan in order to form their main holding company in Luxembourg.” Yup, there are a lot of benefits to doing business through Luxembourg.

Combine bank secrecy with nominee corporations to get a particularly juicy cocktail. An entire industry of “fiduciaries” has formed around the banks for that purpose. These accounting, audit, and law firms set up and maintain tax-advantaged nominee corporations, the infamous mailbox companies, whose directors and top executives are principals of the fiduciary firm. The client and the source of money remain anonymous to the outside world. A perfect setup for money laundering. Because the bank is doing business with a Luxembourg mailbox company, not a foreigner, and because the signatories are pillars of Luxembourg’s society, the setup is impervious to the automatic data-sharing arrangement. But now mailbox companies too are under attack, not only in Europe, but also in the US Congress.

“I expect a serious change of the banking landscape because there will be customer withdrawals,” Alain Steichen explained. Some banks, he said, “would lose the critical mass needed to survive.”
The private banks he was talking about managed €300 billion in assets, generated €3.14 billion in revenues, and contributed €503 million in taxes, according to the ABBL. They employ over 10,000 people directly and indirectly. Of the assets under management, 19% are from Luxembourg, the rest from other countries. Half of that system would disappear; the survivors would have to shrink.
“A large part of the clients of the Luxembourgian banks have undeclared money,” Steichen pointed out. They wouldn’t have a lot of options other than closing their accounts in Luxembourg, he said. They might repatriate their funds – and pay fees, taxes, and penalties – or transfer their funds to Singapore, Monaco, or other murky banking centers. Either way, these assets would leave Luxembourg. Their power to generate income, jobs, and tax revenues would evaporate.
This “undeclared money” has been called “black money” in the battle over Cyprus, much of it from Russians. Northern Europe revolted against bailing out mailbox companies and their black-money bank accounts. While they were at it, Northern Europe, including France in this case, shut down the whole offshore machine, crippled the Cypriot economy, smashed its largest source of income and wealth, and demolished its business model. Encouraged by success, Northern Europe, now including the UK, swiveled its guns in direction of Luxembourg.
Luxembourg was horrified. There were too many parallels between it and Cyprus – the mailbox companies, foreign black money, a bloated financial sector, high household wealth.... It was the era of austerity when pensions, wages, and social services were on the chopping block in other countries. Taxes were being jacked up, as in France, to an absurd degree. Belts were being tightened around the poor. So, tax evasion by the rich and not so rich has become an obvious target. Governments would crack down, not on their own tax dodgers, but more conveniently on countries whose business it was to help them.
With 38% of GDP depending on the financial sector, Luxembourg could not risk a sudden “transition” to a new business model, à la Cyprus. Some of the banks could collapse in the process. It would cause a depression and shred the country’s wealth. Instead, Luxembourg would cooperate, in return for a gradual transition, some loopholes, and a little wiggle room, knowing that the good times were over, and that on the other end of the spectrum, there’d be the Cypriot scenario.
Austerity in Spain succeeded in trimming the bloated government sector. But instead of picking up the slack, the private sector destroyed jobs almost four times faster! The hope is that this fiasco will finally reverse course, that something will click and start a virtuous cycle before the unspeakable happens. But so far, it has relentlessly gotten worse.

Angelo: Observation - before joining the Euro, the smallest countries in Europe had been the most successful. I maintain that there is no real democracy in a group of greater than 150 people. Why would Luxemberg Cyprus or Iceland ever want to join larger groups except for in free trade. Only due to the reality of a hegemonic power or powers imposed by those far too large and therefore far more subjugated groups, America, UK et al.

Posted by Angelo Agathangelou at 7:01 pm