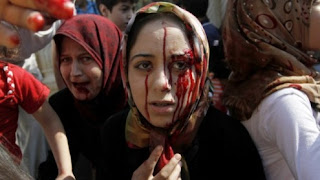 Brandon Smith: The last war America fought openly through proxy was the Vietnam War. The idea was not necessarily “new”; General Smedley Butler’s exposé on his career as a conqueror-for-hire, titled War is a Racket, uncovered a long history of bloodshed by U.S. government and corporate interests in third world countries designed to destroy sovereign nations and plunder their resources. This was done through the use of mercenaries for hire, military men acting covertly or guerrilla forces with a pre-existing agenda supplied through back channels.
After our defeat in Vietnam, our government set forth on a program of private warfare.  The "School of the Americas" was formed, also known as the School of Assassins, in Fort Benning, Georgia.  The combat academy churned out some of the most unstable monsters in third world politics.  The U.S. trained and conditioned agents for violent social change and military overthrow, who were then implanted around the world (mostly in Central and South America).  These agents then initiated war fever in the name of cementing U.S. interests around the globe.  Their horrifying methods were seen as a means to an end.
The sad and disturbing reality is that most wars fought by our country over the course of the past century have not been fought on principle. Instead, they have been fought for profit and for the consolidation of power and oligarchy.

Vietnam was a break in the tradition of secret puppet conflicts, sending the U.S. into the realm of openly admitted proxy. The establishment wanted the American people to know that we were supplying funding and weapons to the South Vietnamese nationalists, meddling in a civil war which had absolutely no bearing on U.S. international relations or domestic policy. The rationalization then was that America had to stop the spread of communism. Ironically, the communists of North Vietnam were a minimal threat compared to the elitist communists within our own borders sitting in positions of political power.
Ultimately, the Vietnam War had nothing to do with fighting communism, and everything to do with manipulating the public into accepting the concept of foreign intervention. That is to say, we were being conditioned to think of interventionism as a perfectly normal U.S. policy.
The war in Vietnam was achieved in stages. First, the U.S. aided then abandoned the government of Ngo Dinh Diem, who was assassinated during a military coup inspired partly by Diem’s despotic mistreatment of the Vietnamese populace. Money was then sent to cement the power of the military junta in the name of countering the rise of the communist North. Soon, weapons and heavy ordinance were being shipped to the South. Then, U.S. “advisors” were sent to train South Vietnamese soldiers.
Full intervention was successfully avoided by the John F. Kennedy Administration until his assassination, after which President Lyndon B. Johnson launched into a full-spectrum U.S. invasion which the mainstream referred to as a “police action.”  This invasion was facilitated by the "Gulf of Tonkin event", which is now openly admitted by officials of the day, including Robert McNamara, as a false flag incident entirely fabricated by the U.S. government in order to engineer a validation for outright war.  Simultaneously, Chinese and Russian interests began supplying the North, though their involvement never officially led to boots on the ground.
I rehash this history because I think it is important to note that the Vietnam theatre seems to have been recycled in Syria today, though the cast of characters has been rearranged slightly. This time, the U.S. and Europe has supported the insurgency. The government of Bashar al-Assad has been cast as the “villain”. Russia and China are now playing the role of mediators and peacemakers, while the West now sends men like Senator John McCain to throw money and weapons into the hands of a rebellion permeated with members of Al Qaeda, who decapitate and eat the hearts of prisoners on video, and who, last time I checked, were supposedly our enemy.
The process and escalation of the conflict has been very similar to our adventures in Southeast Asia. Money has been openly sent to the rebels. Weapons have likely been covertly sent (evidence suggests that this program was perhaps a part of the reason for the Benghazi incident and subsequent cover-up). Now, certain parties within the U.S., Israel, and the EU have suggested open armament of the insurgency, while destabilization of the region is blamed on Assad by the Western media.  A false flag event seems to have already been fabricated in the form of a chemical weapons attack.  Samples of a particular Sarin gas incident have allegedly been collected by French journalists from the La Monde newspaper, and have been supplied to the UN.  The UN of course has identified the samples as Sarin and has immediately led the public to believe that the Syrian government was involved, though they have been forced to acknowledge that the insurgents may also have access to similar chemical weapons.  My question is, who the hell is La Monde?  Are we really supposed to believe that random embedded journalists with no agenda have supplied the UN with substantial proof of chemical weapons by the Assad regime?  Where are these samples?  Where were they taken?  Where is the proof that they were taken during a combat incident?  I smell an Iraqi setup special all over again...
In response to the accelerated armament of what many now consider an entirely fabricated revolution, Russia, Iran, and Lebanon have offered aid to Assad. Russia has supplied Syria with weaponry for years, though shipments have increased in recent months, including a new shipment of S-300 anti-aircraft missiles which has infuriated Israel (Israel has claimed it has no intention to escalate, even thought it has twice used airstrikes within Syria’s borders — their anger over S-300 shipments only shows that they intend to continue such aggression).
Iran has a longstanding mutual defense pact with Syria and has stated that any further direct incursions by the West will result in Iranian involvement (though I think it likely that they are already involved sending arms and advisors of their own). Lebanon has supplied actual ground troops to Assad through Hezbollah. They are aiding the Syrian army in what appears to be a successful campaign against the insurgency. Hezbollah was very effective in repelling an invasion by Israel in 2006, causing the United Nations to step in to provide face-saving resolutions and an excuse for Israeli retreat. I believe their involvement in Syria will be a game changer.
I have been writing and warning about Syria’s potential as a catalyst for an expanded global war for years, long before most people had ever heard of Assad, and much of what I have predicted in the past is now coming true. Whether you believe the Assad regime is good or evil, it is important to realize that our government’s involvement in the region has nothing to do with Assad. This conflict is about setting off chain reactions in the Middle East, and, perhaps, even triggering a world war. You can read more about this in my article “Syria And Iran Dominos Lead To World War.”
Using Vietnam and other proxy wars as a reference, here is how I believe the war in Syria is likely to progress over the coming months:

Now, the temptation here is for one to immediately take sides and to look at this conflict through the lens of “East vs. West.” This would be a mistake. The Syrian government has in the past acted in tyrannical fashion (though much of the latest accusations appear to be propaganda designed to lure the American public into rallying around another war).
Russia is just as restrictive an oligarchy as the U.S. or the EU. China’s society is a communist nightmare state and the average globalist’s aspiration for what they want America to become one day. Iran has many oppressive policies and is certainly not the kind of country I would ever want to live in. The Syrian insurgency is a mixture of immoral and unprincipled death squads and paid covert wet-work agents. The U.S. government is immorally supplying the cash and weapons for them to operate in the name of fighting the same kind of tyranny that is being instituting here at home.
The point is, there are no “good guys” in this story. There are no heroes; only the insiders, the outsiders, and the general public. It has been the habit of the public to ignore most past proxy wars and then flip on the patriotism switch during the rare occasions that American troops are actually deployed. Given time for adequate contemplation (as well as significant American losses), the citizenry eventually turns sour against the paradigm and demands a change. This time, however, there may be no time for such contemplation. I believe that any forward ground action in Syria on the part of the U.S. or Israel will result in a very fast moving global war.
Such a war would seem like insanity, but it serves a vital purpose for certain special interests. It would provide perfect cover for a global economic crash which is about to occur anyway, except in the midst of war, international bankers can divert blame away from themselves. It would provide a rationalization for overt domestic security and the reduction of civil liberties in the name of public safety. It would allow an excuse for a government crackdown on activist groups, who can be labeled “traitors” who aid the enemy simply by speaking ill of government policy. It would give credence to the ideology of globalization and centralized governance. The elites could claim that sovereignty must be erased and all nations must come together under a single banner so that such a “terrible catastrophe” will never happen again.
The war in Syria will not be about Syria. It will not be about the freedom of the people. It will not be about dethroning Assad or establishing democracy. It will not be about defusing violence in the region. Syria will not be the target; we will be the target — our society, our rights, our nation.
America is in the middle of the most insidious consolidation of power in history and Syria is merely a stepping stone in the game. If we cannot maintain our vigilance and allow ourselves to be sucked into the proxy war façade, the elites will get their global conflict with little to no home opposition. The globalists will win, and everyone else will lose.

A Religious Solution To A Jewish Problem? 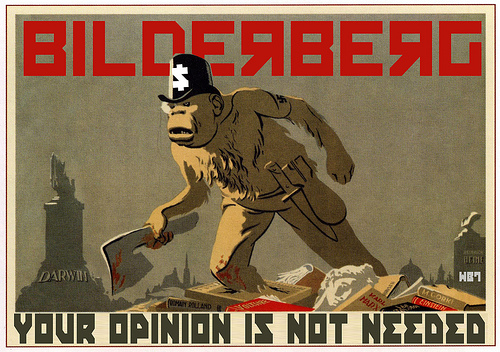 
Iran Next? HANDS OFF!
Posted by Angelo Agathangelou at 10:18 am