The Troika: How three bankster heads became worse than none

Economically wrong, greedy beyond belief, and disorganised beyond measure: The Three Stooges who’d leave out the little hand on a watch 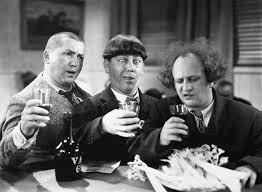 The Slog: The one truly endearing thing about the Troika (as viewed through the prison, sorry, prism of the EU) is its unequalled capacity for making a sow’s ear out of a silk purse, fashioning a cockup from the straightforward, or sowing confusion upon the soil of clarity.
The example this week (and if you didn’t catch it don’t worry, there’ll be at least two more along next week) is the alleged EC budget gap, and the alleged Greek budget gap….the latter being the real reason, I’m told, why the Troika pulled out of Athens last week – well, that and the fact they couldn’t find anything to eat.
Yesterday, Gerry Rice of the IMF was on-message when saying there were no financing problems with Greece “as long as a review of its loan programme is concluded by the end of July. The priority remains for the Greek authorities to deliver on the programme quickly.”

Innane human tulip Jeroen Dijsselbloem then a few hours later called upon all Greek political parties to stay together to fulfil the country’s promises so that the Troika review could be finalised by early in July.
But unabashed, a grinning Dijsselbloem told a news conference in Luxembourg this morning that there was no budget hole at all in the EC, and nothing really to worry about on Greek austerity progress, beyond a lot of dead people. “It is of the utmost importance that the Troika can finalise its review at the beginning of July”, he obfuscated. Continuing on his Mission to Confuse, he added, “We look forward to a rapid conclusion of the review mission soon after the ‘Troika’ returns to Athens which is scheduled for July 1 at the latest,” Dijsselbloem told reporters.
Well Jeroen my little morceau de Gouda, that would be useful given that July 1st is itself, oddly enough, at the beginning of July.
Mr Dieselgoon is, you will recall, the Man who Mistook his Wife for a Template. He was put right on this delusion by Wolfie Strangelove, and afterwards appeared to have mispoken in that he misunderstood the English journalist, whose language he speaks better than most Brits can these days. He must’ve been trying to say “This Cyprus deal is a Temple with many rooms” or something similar, but it unfortunately came out as “Yes, this is the Template for the future”. Wheelchair Wolf, by contrast, was keen to amend this to “the Cyprus Template is unique and will never be used again, until we can find quieter ways of stealing money by going direct to the assurance companies”. Your task Jim – should you choose to accept it – is to search in there for some middle ground. Yes indeed, it’s this week’s episode of Mission Impossible.
Three weeks ago, of course, Frou-Frou Lagarde was saying there was no way the IMF could lend any more money to Greece. Now she sees “no problem given the good progress made by the Coalition government in Athens”. But a source close to the Troika continues to insist that the progress is “Worse than ever….if anything, they’ve put a turbo-charge into the reverse gear”. Soon after this, Lagarde issued a stinging criticism of how the bailout had been handled to date, and yesterday The European Commission said it “fundamentally disagree[s]” with the IMF report that criticised Brussels for not allowing Greece to restructure its massive debt burden. So everything is crystal clear going forward, and we’re all friends again now, no schisms, we’re definitely out of Greece from here on, but open to persuasion, and as luck would have it, I have a favourite restaurant only two kilometers from here.
Two months ago, Klaus Regling, the head of the euro zone’s rescue funds, said  the European Financial Stability Facility (EFSF) was “ready to disburse €10 billion to Athens”. But later the same day, after attending a meeting of European Union finance ministers, Wolfgang Schäuble said a €2.8 billion tranche of funds had been held back “because Greece has not fulfilled some of the bailout milestones”. That’s the thing with bailouts: the milestones have to be filled right to the top, the better to crush the spine of every citizen. For the Lord thy Schäuble turneth the milestones into millstones, and the multitudes waxe sore afraid.
An EU-based business hack was telling me last month that she has to make three times the calls on Troika stuff “because there are three parties involved and they can’t get their stories straight about anything”. I’m afraid this is completely borne out by the media coverage. It is extremely easy to see why there is uncertainty at all times: the three prongs represent ECB megalomania, Wall Street greed and Washington foreign policy; they like to keep Athens guessing; they tell lies to avoid contradiction of earlier statements or embarrassment in domestic politics; and they couldn’t organise a jamboree at a Scout seminar.
But throughout all these interminably misleading statements suggesting the up will be down only if the late can be early, one solid, irrefutable fact is ignored with equal thoroughness by all the Troika factions: if they’d forgiven the entire debt in 2009, everyone with a proper job would be ahead by now: the only losers would be the Central banks and Wall Street. The EU would still have an economy, Athens would still have a food business, and Cyprus would be entirely solvent. The forgiveness-loss facing the ECB in 2009 – with a massively reduced risk of contagion – would’ve been a fraction of what the ESM is about to shell out direct to eurozone banks – as of last night’s FinMin meeting.
But the loss of face suffered by Frankfurt, Brussels, New York and Athens would’ve been incalculable. Indeed it would: but senior Greek politicians, Goldman Sachs salesmen, Siemens fraudsters and clerks from Belgium to Cyprus via Berlin ought to have gone to jail for the rest of their lives. As always, the causes of Snafu are bloated pride and near-bestial corruption.