Now Obama joins the statistics benders. So we have Obamanomics, Osbornomics, Draghinomics and Troikanomics + Real life under the Obaman ‘recovery’ 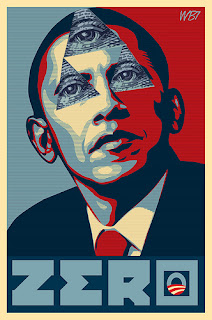 The Slog: Following the earlier post here this morning, voilà in the FT:

‘US economic history will be rewritten this week, as the most far-reaching methodological changes in years will add the equivalent of a country the size of Belgium to output in the world’s largest economy.
The most important change by the Bureau of Economic Analysis, to be announced on Wednesday, will be to start counting spending on research, development and copyrights as investment, and reflect pension deficits for the first time. Combined they are expected to add 3% to gross domestic product.’
Waydergo Barry! The Black Dude strikes again.
You know that part of quantum theory where there is speculation about having several realities at once? It’s arrived right here on Earth, the most insolvent planet in the known Universe, and you can create these quantum reality choices by simple having nomics. A nomic isn’t like a mnemonic (which is the essence of reality) it’s more like a sort of four-dimensional harmonica that plays a different tune depending on who’s playing it.

Yes, if you wanna get ahead, get a nomic. Guaranteed to add 3% to your gdp, which in itself sounds like the penis extension spam that comes from Asia – and is about as effective. Maybe gdp under this system stands for giant dick pretence, or on the other hand, grossly deflated penis. Either way, this makes for two things all empiricists must now bear in mind:
1. None of the US, the UK, the eurozone or the international lenders are using objective tried and tested methods to measure output: they’ve all got their own nomics.
2. More importantly, we cannot trust a single damned figure these bastards put out.
I love it, I really do. Seriously, it’s hilarious. Under Obamanomics, a copyright is an investment. Wow. And a chicken is a carrot. Great game, tell me more.
Under Osbornomics, real growth has nothing to do with the retail price index (RPI). This is almost pure Zen: you go into a shop and think the price into being what you want to pay. Guaranteed fun for all the family while out shopping, albeit baffling and bankrupting for the retailer.
Under Draghinomics, subordination is preference. Awesome. You may think you came last, but I say you came first. Why be small when you can be big? Why be old when you can be young? It’s a breakthrough in the study of eternal life.
And under Troikanomics, slump is merely a form of future growth. You better believe it, fans. This is Time travel: if you destroy the economy today, it will grow again from nothing tomorrow. Einstein was wrong! Matter can be created or destroyed: if Tim Geithner can do the loaves and fishes shtick with just one bazooka, anything is possible. Jesus Christ, eat your heart out: you fed only 5,000? What are you, a f**king amateur?
I’m sorry, this is all too ridiculous to write about in any style other than vitriolic parody. We are in Room 101. There are rats crawling all over Winston Smith’s chest as he puts up four fingers, and tells his tormentors, “I see two fingers”. And a voice comes from behind the two-way mirror.
“You have done very well Winston,” says the honeyed voice of Lord Mandelson, “Congratulations….you are cured”.

Real life under the Obaman ‘recovery’

Ignore the White House Obamabollocks, and study the data instead. A new study in the US conducted for Associated Press finds as follows:
* Four out of 5 U.S. adults struggle with joblessness, near poverty or reliance on welfare for at least parts of their lives
* Hardship is particularly on the rise among whites, based on several measures. Pessimism among that racial group about their families’ economic futures has climbed to the highest point since at least 1987. Two thirds of all middle-income whites think the economy is in “poor” shape.
* Economic insecurity among whites  is far more pervasive than is shown in government data, engulfing more than 76% of white adults by the time they turn 60
* More than 19 million whites fall below the poverty line of $23,021 for a family of four, accounting for more than 41% of the nation’s destitute, nearly double the number of poor blacks
* 12.6% of adults in their prime working-age years of 25-60 live in poverty
* For the first time since 1975, the number of white single-mother households who are living in poverty with children has surpassed black ones, driven largely by job losses and faster rates of out-of-wedlock births among whites. White single-mother families in poverty stood at nearly 1.5 million in 2011, comparable to the number for blacks. Hispanic single-mother families in poverty trailed at 1.2 million.

“They don’t trust big government, but it doesn’t mean they want no government,” says Republican pollster Ed Goeas, who agrees that working-class whites will remain an important electoral group. “They feel that politicians are giving attention to other people and not them.” Crikey, so it’s not just us then.
This was the latest bromide from possibly the most under-achieving President in US history:

“This administration’s highest priority is to rebuild ladders of opportunity, and reverse income inequality.”
Rock on, Barry. By the way, what were you doing during the last five years – reversing ladders of opportunity and doubling income equality? Why are 50% more Americans on food stamps than before you came into Office, Mr First Black President Yes We Can Obama?
Bollocks, all of it. And the data shown above prove it beyond doubt.
This is what The Slog is about: evidenced bollocks deconstruction. Let others yell their thick heads off and use f**k and c**t every third word. In the end, it’s exploding the myths that turns the tide. The great thing about this new AP research is that it blows just about every neoliberal racist myth on the planet sky high.
So then, Dan Hannan, Ben Brogan et al who keep telling us the US economy is “roaring ahead”….where do you go from here guys? More repetition of the bollocks? I thought so – fair enough.
Just so long as the Truth is out there. You will fall on your faces in the end.