THE PAEDOFILE: Why our leaders are offside on the paedophile issue…. 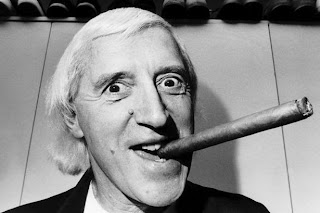 …and there are two sides to the Jimmy Savile saga
The Slog: That Jimmy Savile was very odd indeed is hard to question. But as regular Sloggers know, I have increasingly come to the view over time that (a) he has become a magnet for those who seek publicity and money; and (b) he has been used as a weapon of mass distraction by others with various agendas. As time has gone on, this obfuscation has been complicated further by the unerring instincts of the MSM for exaggeration, invention, and anything else that might sell newspapers.

Nowhere is this more evident than in the Murdoch press, whose owner (the miraculous Alzheimer’s reverser Rupert) has of course an obvious agenda: to smear anyone and everyone associated with the BBC. What began with Plod trying to put every case of child sex abuse at Savile’s door (“Saves orn the paperwork, squire”) then ballooned into multiple arrests of obscure DJs, soap stars and one-time sports reporters. Most of them seem to me – looking at the facts – to have been sad old gropers: sex pests yes, but paedophiles? Look closely at some of the press statements, and you will I fancy join me in suspecting that a little judicious age-lowering here and there has been employed by the boys in blue.


Yesterday, former care-home inmate and blogging aristocrat Anna Racoon ran a piece about what Savile’s family is going through, and why. It will raise doubts in the mind of any fair and intelligent observer of this issue. Like everything Anna does, it is contrarian but extensively researched – using direct contact with the Savile family. It shows that, at the very least, that there has been avarice, distortion and deception in this case. Savile is clearly guilty of some horrendous nastiness, sexual and otherwise; but he has been placed into the smoke rising from Hell, and this is pure tabloid invention: the Devil, you might say, is in the distraction.
What Mme Raccoon boffs on about quite a lot is that still by far the majority of paedophilia takes place outside the care system by adults the children know…a sizeable percentage of whom are family members. I posted about this very topic eleven days ago, but while this is an incontrovertible fact, the key points driving me and others in a quest to lift the carpet on systemic abuse remain as follows:
Visit any Underclass area of any major conurbation, and you will see endless groups – directly or indirectly – associated with the act of or trade in paedophilia. You will find evidence of systemic complicity – some of it judicial, some of it local government, and some of it religiously based. You will hear politicians going lalalalalalah. You will be shocked by the cynical and/or criminal involvement of senior police officers. You will find social services turf wars, corrupt psychiatrists, braindead Judges, and men who are clearly flying a false flag in positions of great responsibility directly involved in the “care” of vulnerable or disturbed children. Mainly, you will given gagging orders.
Look as I have at Canada, Holland, New Zealand, Australia, the US and Asia, and you will find these patterns repeated over and over again: this is not a global conspiracy, but it most certainly is a global problem. Only here in Britain, however, does the Establishment seem to have an interest in losing reports, suppressing evidence, finding distractions, denying the obvious, and working on the mad basis that the only paedophile is a dead paedophile.
Former Cabinet Ministers, Rotherham taxi drivers, Liverpool Councillors, Wrexham hoteliers, Devon cops, Staffordshire doctors, and hundreds of women with lots of children and no fathers have all convinced me over the last seven years that, while there is a lunatic fringe and an avaricious minority, organised child trafficking, systemic child abuse and persistent sexual opportunism are all blighting the lives of a significant number of children in care.
The Education Minister Michael Gove’s view is one of blanket denial. The Health Minister Jeremy Hunt never mentions it, nor does Welfare Minister Iain Duncan-Smith. I have yet to hear a single utterance about this subject from Ed Balls, Harriet Harman or Yvette Cooper. When Tom Watson gallantly raised the issue in the Commons, David Cameron’s body language was at best shifty. Not a dicky bird from Home Secretary Theresa Nutsin-May, despite the fact that her police forces have been opening, closing, dead-ending, reopening under pressure and then arresting here and there for decades now.
What’s happening here is the covering of the backside. It is the same – except even worse – as the explosive Coop Bank bailin information now coming to light about pensioners’ lives becoming a wreck, purely to save the political neck. We the citizens and our children come last: it shouldn’t be that way, but it so obviously is, those who deny it must either be asleep, or Establishment members with a great deal to hide.
A total of four arrests have now been made in the Fernbridge enquiry. A former Cabinet Minister is under suspicion, and lots of papers are being shuffled around from one agency to another in the hope they might self-immolate during the process. Nobody in the MSM – with the honourable exception of Christopher Booker at the Telegraph – is asking the bigger question: why is this not a massive national issue being debated openly in the Commons?
The answer is, I’m afraid, the same old same old. All the paths lead back to the same obscene mélange of bribery, Council corruption, the involvement of privileged groups from Cardinals and Asian taxi-drivers to Royalty, and the protection of Parliamentary members in both the Commons and the Lords. It is just another dimension of a sick culture slithering down into the sewers.
Meanwhile, a paedophile pensioner who abused children in a church-run home in Edinburgh faces a lengthy jail sentence after being found guilty on 22 charges of sex abuse relating to children. In May this year, alcoholic paedophile Mark Bridger – a man who lived out violent sex fantasies about young girls on the internet – went to jail for the murder of April Jones. But Dominic Grieve QC, the attorney general, is busy on more weighty matters: prosecuting a 21-year-old juror on a paedophile-case jury for writing on his Facebook page “Woooow I wasn’t expecting to be in a jury Deciding a paedophile’s fate, I’ve always wanted to F**k up a paedophile & now I’m within the law!” That we have braindead jurors is of little surprise to me; I am merely left wondering WTF Grieve is doing handling this case when he has, surely, far bigger fish to fry.
Lalalalalalalalalalalah.

Source
Posted by Angelo Agathangelou at 11:37 am