Barclays Bank must think we are complete idiots! The sheer arrogance of their advertising.

By Rowan Bosworth-Davies: Barclays Bank, one of the UK's leading criminogenic banking institutions, took a full page advertisement on the back page of the Sunday Times, asking the unbelievably trite question 'Does your bank have free wi-fi in its branches? Make Barclays your bank".

What complete and utter bollocks!

What is it going to cost Barclays to extend Broadband to the public sectors in their branches? Why on earth would Barclays think that any sensible person in their right mind would be persuaded to bank with this flaky bunch of rogues, just because of the offer of a free wi-fi connection?

We have to examine this advert in the full context of the wrongdoing that Barclays has carried out in recent times, and we have to ask ourselves how great their arrogance has become, when they clearly believe that all they have to do to make themselves attractive to new customers is to offer them free wi-fi?


You can just imagine their marketing people examining the proofs for this page lay-out, and saying;

"...Oh yes, that's fantastic, a free wi-fi offer, that'll bring the mug-punters into the counters in their hoards..!"

This is all that Barclays think they have to do to restore their grubby and tattered reputation! This is the limit of their imagination and demonstrates beyond peradventure that they have not learned any lessons from their recent brushes with the law. As far as they are concerned, as long as they can dangle some cheap bauble to the potential marketplace, then they think that the general public will snap up the opportunity to open an account with them, without any further thought!

Let us just refresh our memories about some of Barclays more memorable forays into the unfettered free-market capitalism so beloved of their former Capo, Sgr Roberto Diamante!
Barclays was fined £290m ($450m) in June 2012 for trying to manipulate a key bank interest rate (LIBOR) which influences the global cost of loans and mortgages.

Its traders lied to make the bank look more secure during the financial crisis and, sometimes - working with traders at other banks - to make a criminal profit.

In August 2010, Barclays Bank  had a sanction-busting fine approved . Barclays had agreed a settlement with the US Justice Department over dealings with Cuba, Iran, Sudan, and Burma, all countries subject to US sanctions.

A US judge approved a settlement under which Barclays Bank was fined $298m (£191m) for sanctions-busting. However, despite approving the deal, which meant that Barclays avoided a criminal prosecution, Judge Emmet Sullivan still queried if the fine was enough.

It looked like the bank was "getting a free ride here," he said. Barclays refused to comment on the affair.

In 19 January 2011, Barclays were fined £7.7m by the UK regulator for misselling Aviva’s global balanced income and global cautious income funds. This activity was defined as “a damning indictment” of the banks’ sales-driven advice models.

The bank had to return £59m in compensation for failing to provide adequate investment advice to more than 12,000 of its customers, many of whom were retirees who suffered losses in the financial crisis.

The FSA said that Barclays had failed to ensure that two Aviva funds were suitable for clients who invested nearly £700m in them between 2006 and 2008. Many were seeking additional income and Barclays staff failed adequately to explain the risks involved, the regulator said.

In July 2013 Barclays bank was ordered to pay a fine by the US energy regulator for allegedly manipulating electricity prices.

According to the Federal Energy Regulatory Commission (FERC), who proposed the fines in October last year, Barclays had been manipulating energy prices between November 2006 and December 2008 in states such as California.

The bank and four of its power traders, Daniel Brin, Scott Connelly, Karen Levine and Ryan Smith, are expected to have to pay a total of $453 million (£299 million) within 30 days to the US Treasury.

On Tuesday night (July 16th) a report outlined Mr Connelly must pay a $15 million fine while Mr Brin, Ms Levine and Mr Smith face a $1 million fine each. Mr Connelly, who is the managing director for North American power at Barclays, is facing the largest fine because he is believed to be the leader of the scheme.

Additionally, Barclays must give up $34.9 million in profits, which will be paid into low-income aid schemes in California, Arizona, Washington and Oregon.

FERC based its claim against Barclays on a series of emails between traders, which suggested they were working together to manipulate the index for energy pricing in Western parts of the US. It said that the traders, who have now left the bank, knew they had committed unlawful activities as they had been losing money through power markets deliberately to improve the bank's financial position.

However, Barclays contested the findings. In a statement, it said: "We are disappointed by the action FERC took today. We believe the penalty assessed by the FERC is without basis, and we strongly disagree with the allegations made."

It added that its trading was within the law and that it had cooperated fully with the FERC on the matter. Moving forward, it said: "We intend to vigorously defend this matter."

Subsequently, Barclays Bank has further admitted that '...it was likely to suffer a £50 million fine for the handling of its Qatari bail out...'

These are just reports of recent actions in which Barclays have found themselves on the wrong side of the law and there are others.

I have not touched on Barclay's contribution to the PPI deliberate criminal fraud scandal in the UK, nor its anti-money laundering failures where the FSA singled out Barclays for a large transaction reporting fine of £2.45 million in 2009.

When it comes to reports about money laundering however, Barclays seems to be able to count on a lot of friends to keep its dirty dealings out of the public gaze.

One of my regular readers, Carol, has specific concerns about the way in which Barclays has conducted itself in recent years, particularly with regard to the way in which it has been engaged in alleged money laundering activities.

Carol is a shareholder, and attends Barclays public meetings and she does what she can to get details of certain specific allegations of wrongdoing by Barclays. She is constantly obstructed and denied information, which, as a shareholder, I believe she is entitled to receive.
She has written to the Financial Conduct Authority to seek their help in obtaining details of alleged wrong-doing entered into by Barclays Bank. The latest letter she has received from the FCA is typically obtuse, but demonstrates the degree to which the regulators are 'captured' by their constituency!

The letter notes that Carol,

"...continue(s) to have difficulty in resolving your concerns about Barclays Bank plc, and that you would like us to comment on these matters. I have reviewed previous correspondence with you, and note that in 2008 the Financial Services Authority (specifically ............) advised that we would not be corresponding with you any further on this subject. I would confirm that the position of the Financial conduct Authority (FCA) has not changed, and ...the FCA will not be entering into further correspondence-about Barclays Bank plc.

Any further correspondence received from you on the subject of Barclays Bank plc will be placed on file but will not be acknowledged or responded to.

I hope this is helpful to you and has confirmed our position on this subject..."

So, whatever has gone on, it is clear that the Regulator does not intend that the shareholders should have any right to know! With friends like these, what does Barclays have to fear from any meaningful regulatory intervention?

So, my advice to anyone who is thinking of opening an account with Barclays Bank is;

"...Don't be fooled by these cheap gee-gaws, these silly offers of free wi-fi in their branches...."

Ask yourselves some searching questions like whether Barclays are a suitable bank to be investing your money in, considering all the fines they are receiving for breaking the law at every possible opportunity.

This is much closer to the point - do you want to be the client of a bank whose criminogenic activities would make Al Capone blush for shame? Are you really so gullible that the offer of free wi-fi is going to make you overlook all the wrongdoing that this once respected institution has engaged in?

I very much doubt it, but I do believe that we have a constant duty to remind ourselves of the dishonest actions of those who want our money! 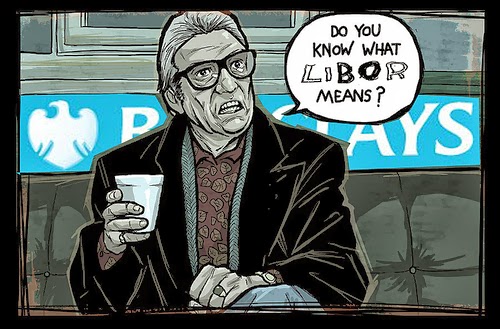 Art by WB7
Posted by Angelo Agathangelou at 5:02 pm