OXI Day: This poem about Greeks will touch your soul

HALC: Auslander was an accomplished American poet and the first Consultant in Poetry for the Library in Congress. In 1943, he published a collection of poems, The Unconquerables. Each poem was dedicated to a different German-occupied country. Here’s his poem about Greece:

An Open Letter to the Unconquerable Greeks
Joseph Auslander
I write this letter to you on my knees
In the night,
O people of a thousand Thermopylaes,
And every word I write,
If it be worthy somehow in your sight—
Sons of Solon, daughters of Pericles—
Will blaze with light.
Regard this letter
As token payment long since overdue
From your eternal debtor—


An echo burning through
The silence and the death piled thick on you
By fire and sword, by famine and by fetter—
An echo of the trumpet Plato blew
Across the darkness that men knew
Not by an honorable foe,
In equal combat, blow for blow,
Under a decent sky,
Beneath the impartial sun,
Were you undone
And left to die.
Ah, no!
But by each slippery ruse
The wolf and buzzard use;
Stalked by that obscene pack
In stealthy and abominable attack
Struck down at last when, faint with hunger,
You could no longer
Stand and strike back
And when you fell, you fell like some great star,
Not broken by defeat or pale surrender,
But falling in dreadful splendour,
Forever falling and falling,
And earth and heaven and the towers of time,
both near and far,
Were shaken with the shouts of terror calling,
And the blood-red wheels of war,
Bright and brawling,
Across the firmament streaked a livid scar.
So you went down; yet, in your dying, cast
A shadow across the craters of the moon as vast
As bright,
As the Archangel’s trumpet blast
Of light,
A shadow upon the hearts of men as well,
To stretch our souls from heaven down to hell!
This we declare:
By all men in extremity everywhere,
By earth and water, by fire and air,
We solemnly swear:
Homer is not dead,
The loins that bred
Ulysses will again
Beget such men
(The spirit of Bozzaris, of Byron,
The Mavrocordato breed
Of Iron).
This is our creed:
The sun
That sees
Fascist and Hun
Cleansed from the land of Demosthenes
Will once more in amazement stare upon
The Parthenon!
This, then, is all;
I have said everything:
The wormwood, the gall,
The courage, the suffering;
Nothing can be
As big as agony,
And agony is king, and can speak
Only in Greek. 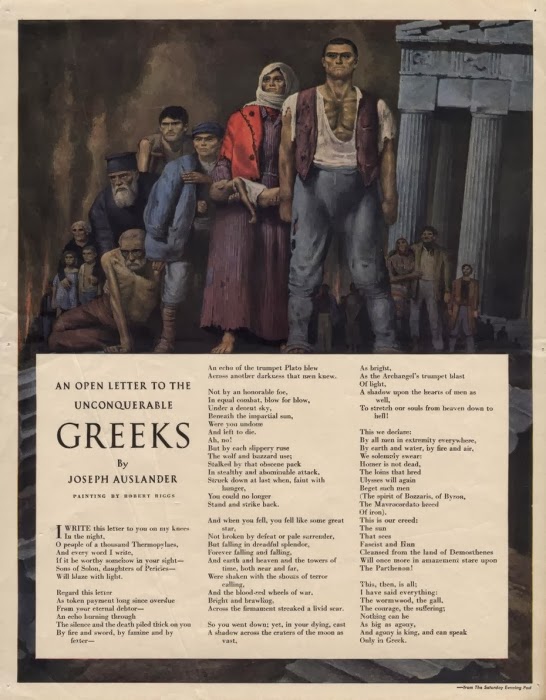 In commemoration of OXI (English: NO) Day, HALC will bring you content highlighting the courage, bravery, and life of Greeks during the war.
The heroism of Greeks during World War II has been celebrated in many different mediums. Yesterday, we highlighted iconic photographs of Greece in WWII. Today, we bring you an astonishing feat of writing by Joseph Auslander.

Women during the Battle of Crete 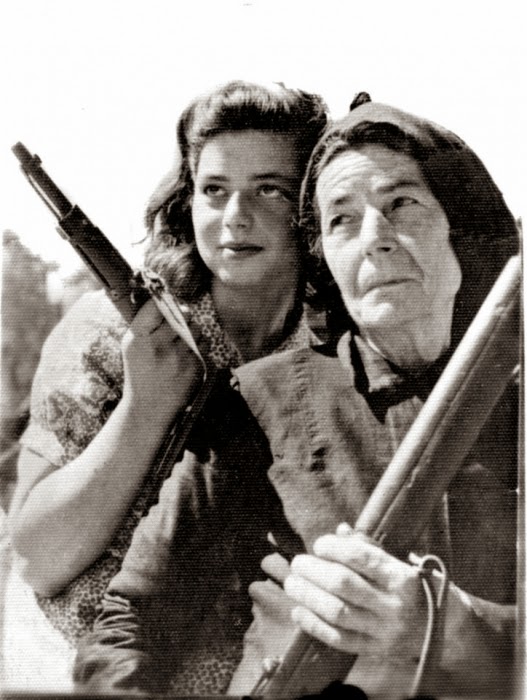 A Greek solider holds his little daughter in his arms 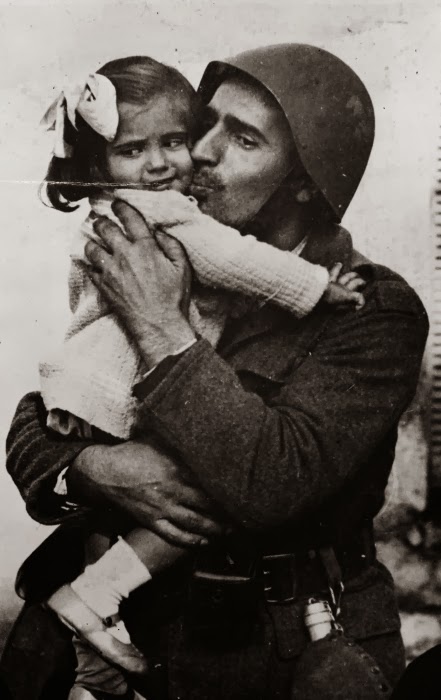 Posted by Angelo Agathangelou at 6:18 pm