Is this the bottom of the barrel at last?

Shizuya Nishiyama. 57, homeless man
By John Ward: I’m sure you will all be relieved to know that the situation at the Fukushima site is now so completely safe, nobody wants to work on cleaning it up, perhaps on the grounds that there’s no point in cleaning something up when it’s already clean.
Except that not even those on the dole will work there, because they’d rather take their chances – any chances – than work at Fukushima. Nobody believes the Tokyo government’s reassurances. And so Tepco is now hiring bounty hunters to search the streets and ditches for homeless people. Tepco is paying them $100 a mug – and the homeless victims themselves below the minimum wage – because only those on the verge of starvation will do it.

Recent gangland arrests have in turn revealed that members of Japan’s three largest criminal syndicates – Yamaguchi-gumi, Sumiyoshi-kai and Inagawa-kai – have set up black-market recruiting agencies under Obayashi – one of twenty sub-contractors hired by the government to effect the clean-up of the harmless. Reuters last week found five firms working for the Ministry of Environment that could not be identified: no construction ministry registration, no listed phone number or website, no corporate registration disclosing ownership, and no record of the firms in the database of Japan’s largest credit research firm, Teikoku Databank.
Tepco is cleaning up the worst nuclear contamination in history by using the underworld to dragoon the destitute. These people are, literally, being worked to death.


So to sum up, a mess started by dishonestly neoliberal, accountant-brainwashed General Electric (and then exacerbated by a lying owner regulating himself) was first of all hidden from the IOC by the Abe government, which action is in turn slowly killing 75 US sailors and hundreds of homeless people…in a grubby alliance with gangsters. This government has now passed the most draconian anti-Free speech law since the collapse of the Soviet Union.
But then, this is the nation that invented Endurance.
This globalist cock-and-cover-up isn’t quite the way it sounds when Dan Hannan is burbling on about neoliberalism brainlessly, but I can only repeat: Milton Friedman thought deregulated, shareholder-rewarding neoliberalism was a good idea because he had no grasp whatsoever of what the sociopathic élite will do when things aren’t going their way. Mr Friedman was an academic who is lauded by Dan Hannan, another academic. You see, there are Fluffies on both Left and Right. Or more accurately, useful idiots.

I have seen the future, and it is full of jerks. 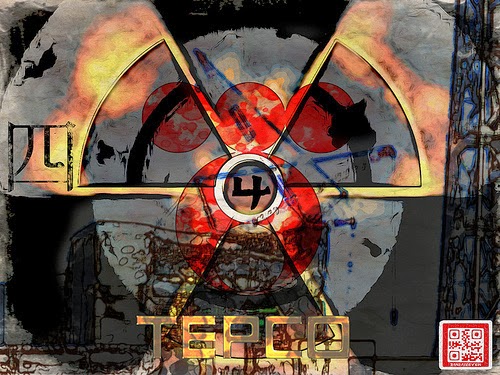 Same old Williams, "Ghettos are the same all over the world. ....They stink!"
Posted by Angelo Agathangelou at 5:57 pm