God is the Universe!

Stefan Molyneux
0:00 - Are there any subjects that you've changed your views on?
1:01 - Should you try to deconvert a religious person on their deathbed?
2:31 - Would you attend a funeral in a church as an atheist?

Read more »
Posted by Angelo Agathangelou at 11:38 pm No comments: Links to this post

THE PAEDOFILE: What connects Welsh care home tragedies to the Secret Family Courts?

Britain treats its frail children as pawns
in a ghastly game of privilege.
We should all be ashamed. 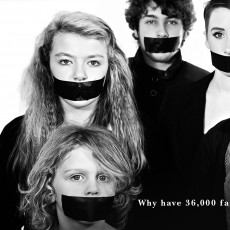 The Slog: On April 13th 2010, in a moment of optimistic triumphalism, and following an investigation by Judge Nicholas Wall, I wrote:
‘It’s taken many years, hundreds of articles and thousands of hours of hard legal work and appeals, but if today’s Times is to be believed, the end is in sight for the Secret Social Worker State.’
Well, it didn’t turn out that way. Judge Nicholas Wall – then newly appointed to investigate the Secret Family Courts – obviously made rather too many enemies in the higher echelons of political paedophile protectors. On December 1st 2012, he ‘retired as president of the Family Division and head of family justice on the grounds of ill health’, the Ministry of Justice announced. 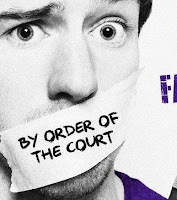 His replacement, however, has been no less outspoken in criticising Family Court secrecy, and how such a thing is a gift for systemic paedophilia. Soon after taking over, Lord Justice Munby opined:
“Both principle and pragmatism demand that we open the family courts, that we drastically relax the present access restrictions….we need both more people going into the family courts, and more information coming out. Each of these is essential; neither alone is sufficient.”

Read more »
Posted by Angelo Agathangelou at 9:20 pm No comments: Links to this post

SilverFuturist: Babbling at the babbling brook.
Posted by Angelo Agathangelou at 7:58 pm No comments: Links to this post 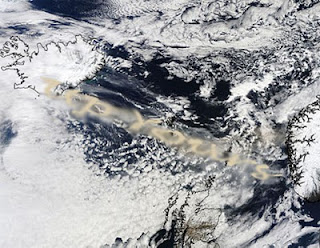 Submitted by Tyler Durden: During the crisis Iceland was held up as one of the best examples of what was so wrong with the bubble that was created and sold to any and all. The party in power during this debacle was summarily dismissed by the people. However, a mere few years later, and given the apparent abhorrence with all things European, the Icelandic people have just ousted the incumbent pro-Europe party in favor of the Independence and Progressive parties that governed during the crisis. As the WSJ reports, the Social Democratic Alliance, which had overseen economic recovery and pushed for European Union membership, saw support tumble as the electorate's concern about personal finances overshadowed the ruling coalition's ability to stabilize the economy. Couple this with the promises of the two parties to cut taxes and the sweell of nationalist sentiment and the Social Democrats were summarily crushed. The leader of the Progressive party perhaps summed up the poeple's views best: "deeper integration with a Europe in "historic decline" isn't necessarily the best for Iceland," and that "economic crisis in Iceland and Europe has taught us the importance of being able to control your own destiny." Of course, as with any election, lots of promises are made; "they have really been promising the moon, people might get dissatisfied when they see that not everything can be realized."

A Blatant Screwing: Things are getting steadily better than even worse, even though the good signs are worse than when things were bad.

Why do our economic headlines
suggest headless chickens? 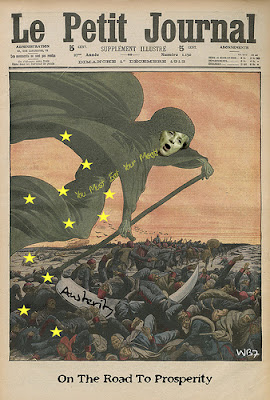 The Slog: For two months now, I have felt that the best thing is to stay short in long, but also sell short while holding folding, just in case the long game stops spreading portfolios from broadening bond yield concentrations in the eurozone – or of course, narrowing interest-rate swaps take the heat off derivative swaps in Asia. It’s also pretty clear (to me at least) that falling gold prices and rising unemployment are a sure sign of something, and could be a wake-up call for all those silver fans anxiously looking to buy Portuguese Escudo futures in the absence of any present danger they can link to the past.  It could therefore be a good time to play the currency markets, or even float the idea of a Yuan market-play hedged against the Dollar-price of dark liquidity clouds within virtually platformed American Eagle instruments.
I got to this clarified strategy by each day reading the online, TV and press headlines that are there to guide investors like me: that is, those who have only a functioning left brain and a firm grip on reality to guide them. Today’s efforts have so far been in the same vein:

The 'monarchs of money' and the war on savers + They Rig

Power Shift: First in a series on the rise of the central banksters and the global imposition of cheap credit 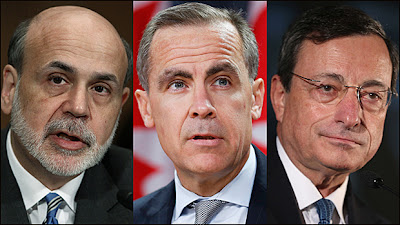 By Neil Macdonald: Quietly, without much public fuss or discussion, a new ruling class has risen in the richer nations.
These men and women are unelected and tend to shun the publicity hogged by the politicians with whom they co-exist.
They are the world's central bankers. Every six weeks or so, they gather in Basel, Switzerland, for secret discussions and, to an extent at least, they act in concert.
The decisions that emerge from those meetings affect the entire world. And yet the broad public has a dim understanding, if any, of the job they do.
In fact, these individuals now wield at least as much influence over the lives of ordinary citizens as prime ministers and presidents.
Read more »
Posted by Angelo Agathangelou at 2:09 pm No comments: Links to this post

The truth about shale: it’s a fracking nightmare

The Slog: There is a hilariously unintended irony in an FT (£) headline to the Editorial on its website about shale fracking. The article – pure pro-shale propaganda from tip to toe – begins, ‘Ignorance is the biggest enemy in the shale war’. It then goes on to show that fracking doesn’t cause earthquakes. Er, that’s it.
Informed observers have never really taken that charge seriously, so the ignorance irony is indeed pretty major. But this seems increasingly to sum up the FT these days: it reads more like a trumpet than a magnifying glass. When it runs editorials like this one, it’s more strumpet than trumpet.
There are really only two critiques of Shale fracking which, for my money, remain compelling.
The first is that shale gas well production tends to drop by 50% or more after the first year, and the reason is simple: the first year gets out all the easy stuff: after that, it’s more haystack and fewer needles until it’s not worth carrying on. Early last year, shale gas production in the U.S. was at 27 billion cubic feet per day….and its share of energy production was rising steeply. But even with new fields coming on stream, as US States scramble to solve their fiscal problems via fracking finds – that production has continued to level off.
In this context, FT boldly asserts that ‘The US shale boom has brought natural gas prices down by two-thirds in four years’. Has it? The gas price dropped close to $2 per MBTU last year, but has doubled since then to just under $4 today. Ignorance is bliss. Or PR.
Read more »
Posted by Angelo Agathangelou at 12:37 pm No comments: Links to this post

By mickeyman: The reconstructed phase space portrait is one tool that can be used to gain insight into the dynamics of complex systems, whether these systems be natural or man-made.
Today we will use these tools to look at precious metals.

The near-constant slope over long stretches of this plot tells us that gold is already increasing in price exponentially. So don't say that gold price will increase exponentially during a financial crisis. It is already doing so, and has been since early 2001 (notwithstanding the recent turmoil).


The break in slope in late 2005 tells us that the gold price suddenly began to increase more rapidly.

Would you buy a used car from Mario Draghi?

Why Mario the Messiah is really Draghi the Devil

The Slog: As head of the Bank of Italy from 2005-11, Mario Draghi was directly responsible for regulating the country’s banks. The seeds of Montei dei Peschi di Sienna’s (MPS) demise were sown at the time. Draghi had the information and the powers to stop what was happening – and block the deal that sealed MPS’s fate. But he chose to do nothing about it.
In fact, The Bank of Italy under Mario Draghi in 2010 spotted the very accounting irregularities that allowed Banca Monte to mask losses, and later forced it to restate profit. In December 2008, MPS borrowed €1.5 billion from Deutsche Bank AG (DBK) as part of a derivative deal codenamed Project Santorini, that helped it disguise losses. Draghi has since contended that Monte Peschi hid documents, impeding his analysis of the “true nature” of the company’s dealings. But both corporate and academic opinion-leaders have gone on the record to assert that this defence is weak and incredible: Draghi, they argue, must have known.
My reliable source in Madrid insists that the end of any belief in Draghi’s honesty came when he subordinated the bondholders as part of the second Greek rescue: “What [Draghi] did was fraud, pure and simple. Going that obligatory route was simply a crooked way of avoiding Greek default. There’s nothing he wouldn’t do to save the euro, and every bond buyer and dealer now knows that.”

Angelo: We are proud sponsors of the artist taxi drivers planned documentary 'This is Not a Recession it's a Robbery' ...see you all in London at the special launch preview;)
Read more »
Posted by Angelo Agathangelou at 8:13 am No comments: Links to this post

Nargess Moballeghi: The City of Lincoln in the north of England. Scenic. Suburban. And suddenly a hub for Britain's imperial war of terror. This week the government announced that it's now conducting drone attacks on Afghanistan from the base behind me - RAF Waddington - where 100 assassins are manning the hi-tech reaper drones carrying 500lb bombs and hellfire missiles. In response to the move, hundreds of anti-war demonstrators have marched through the city to the army site. Drone Expert Chris Coles agrees - that Britain is expanding its drone project - with the help of its imperialist friends. The government defends drones. It says they save lives. It will only admit to one civilian killing. But reality on the ground speaks differently.

Read more »
Posted by Angelo Agathangelou at 5:09 am No comments: Links to this post

SilverFuturist: "a global collaboration to create an unlimited supply of clean, cheap energy" http://www.independent.co.uk/news/sci...
Posted by Angelo Agathangelou at 1:17 am No comments: Links to this post