I DON'T NEED FEMINISM, because...

WomanAgainstFeminism: Several women say why they DON'T need Feminism.
music: "I Wonder If God Was Sleeping" by Scott Altham
Posted by Angelo Agathangelou at 11:57 pm No comments:

THE PAEDOFILE: All mouth & Trousers from Plod. Situation normal. 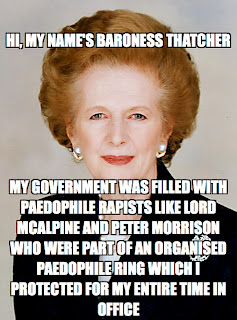 The Slog: We’re back in that strange nether world of the Unnamed Arrests of the Ancient, and the Outing of the Dead Paedophiles. Papers obtained by Exaro show just how vigorously Cyril Smith (dec) defended himself against charges of paedophilia. And Baroness Thatcher (dec) tried umpteen times to get Jimmy Savile (dec) a knighthood, herself having a personal adviser Peter Middleton (dec) who was a raging child-shagger.


Today, Police investigating historical abuse of children at care homes across north Wales have arrested a 72-year-old man in Wrexham.
Plod said the individual was arrested on suspicion of eight physical assaults alleged to have taken place between 1974 and 1986, involving five boys and three girls. The unnamed arrested man has been taken to an un-named police station in north Wales, the town of which has also asked to remain anonymous.

liarpoliticians: Labour's Harriet Harman is upset there are still men-only membership clubs in the UK... her cancer of political correctness wants to eradicate them - but no comment on women only clubs. Hypocrite.

By Wolf Richter: CEOs have, in these crazy days of ours, one primary job, it seems: manipulating up the stock of their company. Few master this delicate art like Tesla Motors CEO Elon Musk, who has been able to take his highflyer into the stratosphere on a wing and a prayer, or in dollar terms, from $25 to $133 a share in less than a year. But behind the scenes, these CEOs and others perched at the top are wallowing in gloom about the economy’s future. 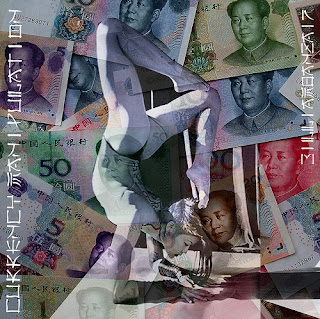 They're the most negative since October 2009, the days of the Great Recession, according to Markit’s semiannual Global Business Outlook Survey that covered 11,000 companies in 17 countries. The culprits with the sharpest declines in confidence: executives in the US and China.
There were some exceptions: confidence improved in the UK and Brazil. Indian executives, rather the sinking deeper into their confidence morass, were able to hang on to their three-and-a-half year low. But in the US, optimism about future activity levels, revenues, inflows of new business, and profits, both in manufacturing and services, all fell to post-Financial Crisis lows.

Read more »
Posted by Angelo Agathangelou at 6:12 pm No comments:

US Real Quantitative Easing is $850 Billion Per Month 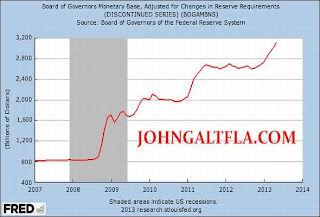 By John Galt: There is this persistent myth permeated by the main lame-stream media, politicians, financial cable television, and worst of all the banking community that the current levels of “Quantitative Easing” (QE) initiated by the Federal Reserve Bank of the United States is only $85 billion per month. That would be amusing if it were true. The United States surrendered control of the printing presses in 1913 and after a 97% depreciation of the currency, this final Ponzi scheme initiated to protect the economic system that the central bank designed for their profit and pilfering continues as America slumbers through sub par economic expansion if not outright real contraction.
Before I take a moment to explain how the purported QE is far in excess of what the propaganda promotes, I shall provide some logical background using history and the Fed’s own charts to illustrate the folly the Fed is engaged in. Interestingly enough, after eradicating the tracking of M3 to measure the expansion of the monetary stock, more charts were recently discontinued which helped to provide a picture of just what was happening with the explosion of the monetary base and where the Fed’s institutions were keeping their “cash” deposits and investments.

CRASH 2: Why there better had be an alternative to the current model…

….or everything will end up in the sewer. 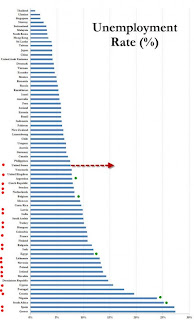 The Slog: The chart (for which I’m indebted to Irish Slogger Christo) the list of countries in trouble at the moment is very long indeed. The ones below the arrow at 7.5% unemployment (roughly the alleged US rate) marked with a red dot are those which have been following austerity policies recently, and/or work to a heavily Globalist Friedmanite economic model. The ones marked with a green dot I have set to one side, as I would say they have socio-economic and political problems that are not really part of the ‘mainstream’ crisis of neoliberal capitalism: Egypt, South Africa, Argentina and so forth.
As you can see, those economies heading south are somewhat replete with red dots. The entire collection of peripheral, central and southern States within the eurozone are represented: and the more ‘help’ they’re being given by Brussels-am-Berlin, the higher their employment rate is.
Only sixteen countries on the planet in 2013 have below 5% employment. Only one is in the EU. None of them are pursuing either austerity or Friedmanite neoliberal economic policies.
I venture to offer the opinion that what we have here is a failing model, and an urgent need for new ideas about how to stop a quickening spiral down the plughole.

Read more »
Posted by Angelo Agathangelou at 2:44 pm No comments:

Spiegel: Greek parliament on Wednesday is considering yet more public sector cuts. But even that might not be enough, according to a German newspaper report. With German elections pending, though, any immediate additional relief is unlikely.

The Greek recovery may be facing yet another hurdle. According to a report by German daily Süddeutsche Zeitung, the beleaguered country needs another massive influx of money if it is to avoid insolvency. The paper cites an unnamed official at the European Commission as saying that the "financial gap" could be as large as €10 billion.
The news comes at a difficult time for Greece and its relations with Germany. German Finance Minister Wolfgang Schäuble is set to visit Athens this Thursday for consultations with his Greek counterpart Yannis Stournaras and with Prime Minister Antonis Samaras. Schäuble is highly unpopular in Greece for his consistent insistence on austerity. And with German elections looming in September, it seems unlikely that additional aid money for Athens will be forthcoming anytime soon.

Read more »
Posted by Angelo Agathangelou at 12:32 pm No comments:

Prozac World: These Are The Most Stressed Out Countries

Submitted by Tyler Durden: While anti-depressant use is surging in Sweden (up 1000% since 1980), bursting in Britain (up 495% since 1991), and up an astounding 400% since 1994 in the USA (with 1 in 10 on some kind of 'prozac'), it is the poor-old Nigerians that should really be complaining. Based on seven variables, Bloomberg has scored 74 nations around the world for their "stressed-out" factor and finds the USA to be 54th (so stop whining and suck it up), Norway the least stressed-out of all and El Salvador and South Africa at the top with Nigeria (with the roiling Egyptians ranking 15th).

Read more »
Posted by Angelo Agathangelou at 9:23 am No comments: 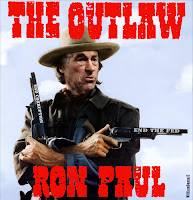 “Chairman Bernanke’s statement today before Congress and the American people that he hopes to devalue our currency at a rate of 2 percent a year is an insult to the millions of Americans who are struggling to pay higher prices each and every day. Though the debasement is already much greater than 2 percent, 2 percent inflation is still immoral theft and is economically foolhardy.
“Despite what Chairman Bernanke said today, central economic planning with currency inflation and interest rate manipulation does not help the poor and middle class; it merely enriches Wall Street and the politically connected. It hurts those who dare save their money to plan for their own retirement or pay for their children’s education.  Inflating the money supply in secret to serve special interests and feed the government’s overspending must end if we ever expect to get a handle on the serious problems facing our nation.

Read more »
Posted by Angelo Agathangelou at 8:15 am No comments:

By Madison Ruppert: The US Central Intelligence Agency (CIA) is participating in funding a $630,000 study on geoengineering for reasons which are not entirely clear as of yet. 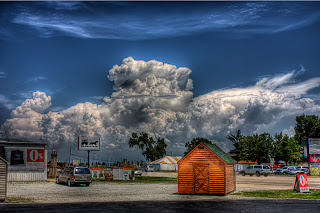 Geoengineering is the practice of using highly experimental techniques to modify the climate of the Earth in various ways, something which researchers like Dane Wiggington contend is highly dangerous.
This particular 21-month-long study has a final report due in the fall of 2014 and was commissioned in concert with the National Academy of Sciences (NAS).
The costs will be split between the NAS, CIA, the National Oceanic and Atmospheric Administration, and NASA, according to Mother Jones.
The NAS website for the project specifically states that it “has support from the National Academy of Sciences and the U.S. Intelligence Community.”
William Kearney, a spokesman for the NAS, told Mother Jones that the above phrase refers to the CIA.
However, Edward Price, a CIA spokesman, would not confirm the notoriously secretive agency’s role in the project.

Read more »
Posted by Angelo Agathangelou at 2:35 am No comments:

Where Is All The Inflation?

By Dan Rubock: One of the most popular questions we receive at our website goes something like this: 'Hey I watched your videos and I get most of it - but if we are printing so much currency why aren't prices rising rapidly?'. It's a great question that we've covered many times before - but it's time for another refresher. Anyone who has watched the first episode of Hidden Secrets Of Money will be familiar with Michael Maloney's hockey stick charts of global currency creation. For those who haven't seen the video, the charts depict the epic levels of lunacy that governments around the world have resorted to in an effort to keep relative currency values in check.

So let's step back a moment. Just why has the whole world joined the party when it comes to these obscene levels of currency creation?
Here's the nutshell version:

Read more »
Posted by Angelo Agathangelou at 1:14 am No comments: