By Robert St. Estephe: In honor of Canadian law professor, Elizabeth Sheehy, who has in her new book called for the legalization of homicide in those cases where a woman who has killed a man can relate a consistent enough narrative supporting her feeling that her violence was emotionally justified (no conventional standard of evidence need be applied), I have engaged in a bit of lexicographical innovation, and have engaged in the time-honored art of neologism-coining (the creation of a new word). 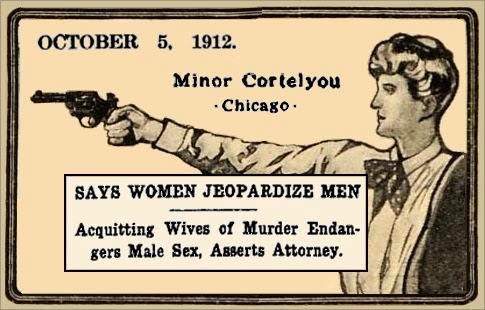 Vocabulary word of the day: “Sheehicide.” Definition: The court-sanctioned murder of a husband by a wife. 2 varieties: 1) premeditated sheehicide; 2) cupidic sheehicide. — ALSO SEE: “Murder tourism.”
In early US, women were acquitted of murder frequently (not always) if they claimed to have been physically abused. In some cases the testimony would involve witnesses stating that the husband was never known to have struck the killer and evidence would show the victim of the homicide was shot in the back. Yet the weepy thespian — having mastered the art of courtroom as stage — would still be promptly acquitted.


The big question, when looking at the homicidal woman who talks of “abuse,”  is this: where is the solid evidence of battery? If acquittal can follow without it, then it becomes very attractive to marry men with money or to take out life insurance for the express purpose of murdering him, a type of crime that is already common enough. By legalizing the practice of killing men accused of such behavior we are guaranteed a crime wave of Black Widow murders for profit. Just look at the case of would-be Texas murderess Andria Stanley — as documented in detail by the diligent female prosecutor of her 2013 trial –  if you want to get a good idea of how the exploitation of every possible feminist victim-pose can be exploited almost endlessly by a woman with a personality disorder.
Did you accidentally bump your wife in the hallway? — and then 3 months later (insensitively) buy her a second rate birthday present? Under feminist victim-jurisprudence, you now are a marked man — marked for life. And your “abusiveness” can be trotted out against you — and your children, by association — with the flick of a speed-dial. Your “victim” – provided she is one of those not-so-terribly-rare women suffering from excessive self-involvement, a victim-complex, or a personality disorder — will hold over your head her right to summarily execute you, and hold it over you forever (if the doctrine of feminist jurisprudence has becomes institutionalized). This is the reality when, from infancy onwards, a girl is raised to believe in the fictional (politically correct, ideology-based) historical narrative that the education system has adopted and which which  it aggressively and callously indoctrinates its innocent subjects.
Obey! That is the message of feminist jurisprudence that is directed from the experts on high downwards to the members the scapegoat sex.
The above described scenario is the quite realistically expected one for a great many couples who have yet to come together. Any woman whose weakness is for harboring, and — with encouragement from the culture at large (TV, magazines, school, etc.) — for deliberately nurturing her cumulative collection of resentments, so that she comes to fetishize every perceived slight as a prized mental possession to be arranged like model furniture in her interior doll house, will have a wide open course for lashing out in any fashion that fits the impulse of the decisive expressive moment. This is the twisted gift that the Professor Sheehys of the world want to hand down from their safe little ivory towers.
Empowerment!
***
Following is a small collection of three — culled from a quite voluminous corpus — of newspaper articles, dating from 1912 to 1921, that affords the contemporary reader a bit of direly needed historical context — context of the sort your professors would most likely be condemned for were they to have proffered them in the classroom. But that is what A Voice for Men is here for: to dish out the perspective which the education industry and the corporate media work so diligently at withholding from you.
***

NOTE on this post’s title “He Fears You -1912”: “She Fears You” is the name of a mandatory conditioning session initiated in 2010 which some universities require their male students to attend. It is “a program at which they will be pressed to acknowledge their personal complicity in a “rape culture.” “She Fears You” is based on the theory that men need a “combined cognitive and emotional intervention” in order to change their “rape-supportive beliefs.”
[Samantha Harris, “Hamilton Requires First-Year Men to Attend Presentation on Campus ‘Rape Culture’; Female Applicants Not Forewarned of Dangers of Attending Hamilton,” Fire (Foundation for Individual Rights in Education), Sep. 27, 2010]
***

FULL TEXT: Chicago, Oct. 4. – Minor Cortalyou, a salesman, appealed to-day to the Court of Domestic Relations for protection from his wife. In arguing the case Isaac Lipson, his attorney, said

No man’s life is safe from an attack by an infuriated woman since the freeing of so many women accused of having murdered their husbands.

Cortalyou testified his wife had threatened to kill him and had driven him from home. He had been arraigned for alleged wife abandonment. Within the last two years four or more women have been acquitted in Chicago courts of having either shot or poisoned their husbands, and in other parts of the country as many more were freed.
“The life of my client is in danger,” Lipson declared. “His wife’s mind has become inflamed as a result of the wholesale freeing of wives charged with murdering their husbands.”
[“Says Women Jeopardize Men – Acquitting Wives of Murder Endangers Male Sex, Asserts Attorney.” New York Tribune (N.Y.), Oct. 5, 1912, p. 6]
***

FULL TEXT: “Women must be barred from criminal trials in Fulton county [Georgia],” stated Mrs. Hattie Barrett, female detective, who has been subpoenaed by the state.
“The courtroom of the average murder trial is merely the training school where wives learn the tricks used by other women in killing their husbands, and then go home, talk them over with their neighbors and then use said tricks in ridding themselves of their husbands.”
Mrs. Barnett had a conference with Judge John B. Humphries in regard to having the female of the species barred from sensational trials. Mrs. Barnett stated further that she saw during the Abbott trial women offering cooked chicken legs to court attaches in order to have the attaches reserve seats for them.
“Women of this class brought heir launches and spent the day, often bringing their lunches and spent the day, often bringing their children of various ages with them. If I have to go to the legislature, I shall get morbid women barred from such trials,” she completed.
[“Murder Case Trials Called Schools For Women Slayers – Mrs. Hattie Barnett, Female Detective, Asks the Judge to Bar Members of Her Sex From the Courtroom.” The Atlanta Constitution (Ga.), Mar. 8, 1919, p. 1]

FULL TEXT:  Washington, Aug. 10—”Compulsory disarmament of women” was suggested today by Alice Robertson, Oklahoma’s lady congressman. With murders by women on the increase, she declared it as necessary as the disarmament of nations.
‘“The lady from Oklahoma” had been asked to comment on the shocking and growing tendency of her sex to kill off the male population.
“The women talk so much about disarmament – well, why don’t they disarm’’ she demanded. “Why don’t they begin it by disarming women.”
When informed a movement was under way to have her named as a woman member of the American delegation to the president’s disarmament conference, she said:
Why should I be? There is no place for women.
~ Get Off Too Easy. ~
Speaking her mind on women murderers, suffragists and other females of the species, she said:
“Women who murder get off too easy. They’re not judged according to the same standards as men who murder, but you don’t hear the suffragists demanding equal rights for the men, do you? No the suffragists want equal rights for women with special privileges.
“Men are not so bad. Women declare them cruel and unjust but they are not. It is to be remembered that men who are bad had women as their mothers.”
“But to disarm only the women – that would be unjust,” it was suggested.
“There should be compulsory disarmament of men too – of course, the men should be included,” said Miss Alice

Robert St. Estephe–Gonzo Historian–is dedicated to uncovering the forgotten past of marginalizing men. “Gonzo journalism” is characterized as tending “to favor style over fact to achieve accuracy.” Yet history – especially “social history” – is written by ideologues who distort and bury facts in order to achieve an agenda. “Gonzo” writing is seen as unorthodox and surprising. Yet, in the 21st century subjectivity, distortion and outright lying in non-fiction writing is the norm. Fraud is the new orthodoxy. Consequently, integrity is the new “transgressive.”

Welcome to the disruptive world of facts, the world of Gonzo History.