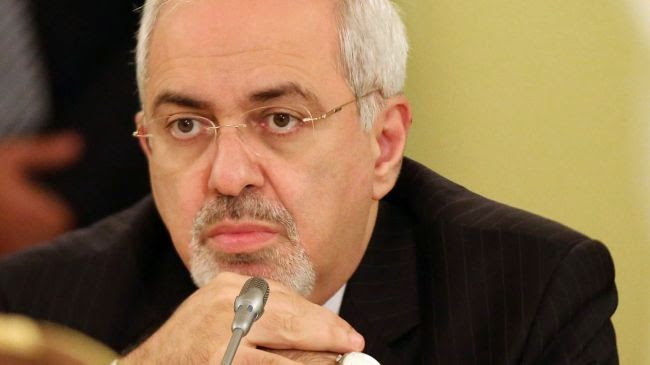 Iranian Foreign Minister Mohammad Javad Zarif says the Israeli regime and its American supporters spearhead an “anti-Iran campaign” in an attempt to portray the Islamic Republic as a global “threat.”
Orwellian UK BANNED Press TV: In an essay for the journal Foreign Affairs, Zarif said the administration of Iranian President Hassan Rouhani seeks to “defeat the international anti-Iranian campaign, spearheaded by Israel and its American benefactors, who seek to ‘securitize’ Iran -- that is, to delegitimize the Islamic Republic by portraying it as a threat to the global order.”
“The main vehicle for this campaign is the ‘crisis’ over Iran’s peaceful nuclear program -- a crisis that, in Iran’s view, is wholly manufactured and therefore reversible,” wrote the Iranian foreign minister.
The administration of President Rouhani engaged in nuclear talks with the P5+1 group – the US , Russia, China, France, Britain and Germany – in an effort to foil the smear campaign launched against the country, added Zarif.
The top Iranian diplomat further emphasized that the Islamic Republic “has no interest in nuclear weapons and is convinced that such weapons would not enhance its security.”

Iran and the P5+1 group inked an interim accord, dubbed the Joint Plan of Action, over Tehran’s nuclear energy program in Geneva, Switzerland, in November 2013.
Tehran and its negotiating partners have been holding talks in an effort to hammer out a final accord aimed at fully resolving the dispute over the Islamic Republic’s nuclear energy program.
“The ongoing negotiations over the nuclear issue face no insurmountable barriers. The only requirements are political will and good faith for the negotiators to ‘get to yes’ and achieve the objective established by the Joint Plan of Action,” stated the Iranian foreign minister.


A group of Israeli land thieves who call themselves the 'settlers' have uprooted more than 100 olive trees in the occupied West Bank.
Orwellian UK BANNED Press TV: 'The settlers' destroyed the trees belonging to Palestinian farmers in the village of Ras Karkar, northwest of the West Bank city of Ramallah on Sunday.
The olive harvest is the main annual source of income for the villagers and they say the frequent settler assaults on their property have affected the livelihood of farmers.
“The olives and oil we make from these trees are our only source of income. We live off this land. The settlers contaminate our water. They prohibit us from reaching the springs, and they cut down our tress,” Ali Azmi Samhan, a Palestinian farmer, told Press TV.
Villagers say the settlers returned to Ras Karkar on Monday and attacked Palestinian farmers who were attempting to replace the destroyed trees.
On January 1, Tadamun Foundation for Human Rights, an NGO, said in an annual report that an estimated 8,000 trees, some of them hundreds of years old, had been damaged and destroyed altogether by the Israelis.
“Settlers’ attacks include uprooting, burning and cutting down olive trees… Olive groves were also flooded by wastewater from the settlements,” said the rights group.
“We have been unable to count the hundreds of trees damaged in groves close to settlements due to Israeli security measures.”
Villagers living south of the West Bank city of Nablus have said that Israeli settlers used chemicals in several cases last June to burn 1,500 trees there. In the blaze that followed, more than 49 acres of prime agricultural land was also destroyed.
More than half a million Israelis live in over 120 illegal settlements built since 1967.

Posted by Angelo Agathangelou at 11:47 am