The growing reality of banking collapse and bailin strategies
By John Ward: Following the difficulties of Banco Espiritu Santos in Portugal yesterday, it was notable that in Spain, the Spanish government issued a retroactive tax on bank deposits there “as an aid to stimulating economic growth”. Taking away aka stealing the spending power of consumers is not, I would contend, the method of choice for kick-starting a dead economy (which was anyway supposed to be doing so well)…..but I wonder if the Government in Madrid gave much thought to the illegality under the Lisbon Treaty of retroactive legislation?
Probably not.
Last week, German Bundesbank President Jens Weidmann gave yet another speech directly firing a salvo at Mario Draghi’s “loose monetary policies”, and their risible attempt to keep the cost of ClubMed borrowing artificially low. Herr Weidmann quite rightly pointed out, “If expectations are not fulfilled, there will be a severe downside risk”. Being a polite, well-bred and educated German, what Jens is saying here is “we all know the Italian rapscallion is fiddling the yields, and when the solids hit the fan, the markets will have their revenge”. I happen to agree with him. And with Portugal so joined at the hip fiscally and economically to Spain, this may yet turn out to be the start of Something Big.
Over the seas to Italy, another approach to misappropriation has surfaced.
Pier Caldo Paduan is the country’s relatively new finance minister, and he has pointed out that the time has come for Italy’s pension providers to invest “spontaneously” in the future of the Italian economy…..an interesting investment concept in that, under current empirical conditions, it doesn’t have a future. Paduan is rather too quick (in my estimation) to add that there must be “full respect for the autonomy of investors”. If you have the same mindset as me, you will surely be asking how a demand for such investment gives the investors (and their hapless clients) any autonomy whatsoever.

At the conference where Paduan made this thinly-veiled demand, it seems there was ‘concern that dictating to pension funds what they should invest in was equivalent to privatising them’. I’d imagine there would be, really.
Meanwhile, beyond the eurozone of exclusion, the UK’s equally flakey “recovery” is in the middle stage of being found out. Based on Britain’s office of national statistics data, a formal TSC review has issued a commentary on the UK’s trade imbalance, pointing up words like ‘challenging’, ‘unsatisfactory’, ‘not rigorous’, ‘clearly work to do’ and so forth. As with German politesse, this is English politesse for “it strikes us as a load of old cobblers”.
The UK’s trade deficit increased from £2.1bn to £2.4bn from April to May, which in percentage terms is a whopping 14.3% deterioration. Clearly then, our “recovery” is not of an export nature, as such. The real story here (sorry to boff on about this again) is that we underwent a frightening £9.2bn trade deficit in goods – ie, real things not virtual banking paper. Britain is, in reality, the ultimate sick man of Europe….and the degree of Osborne’s attempts to twist this truth into unfounded lying optimism is the sickest part about it.
Just how wafer-thin ‘confidence’ in ClubMed really is has been demonstrated by the spike in Greek and Portuguese debt borrowing costs since the BES suspension. It supports fully the Weidmann view that Goldmanism is no replacement for gold when it comes to the value of a currency….and fiscal fantasy can’t be put off forever by the use of fiat printers. The Fed, ECB and BoJ can drown the world in inflationary liquidity from now until kingdom come: the reckoning is upon us.
I use the pronoun ‘us’ advisedly there, because as every sly little poke of the élite shovel into our savings shows, we are going to be the ones asked to make up the difference. Such a spade-wielding vulture might fly in Greece, Portugal and even the UK. But it will drop like a stone in Italy, France and – eventually – Spain. That’s when the trouble will start.
Stay tuned: this story is gaining traction. 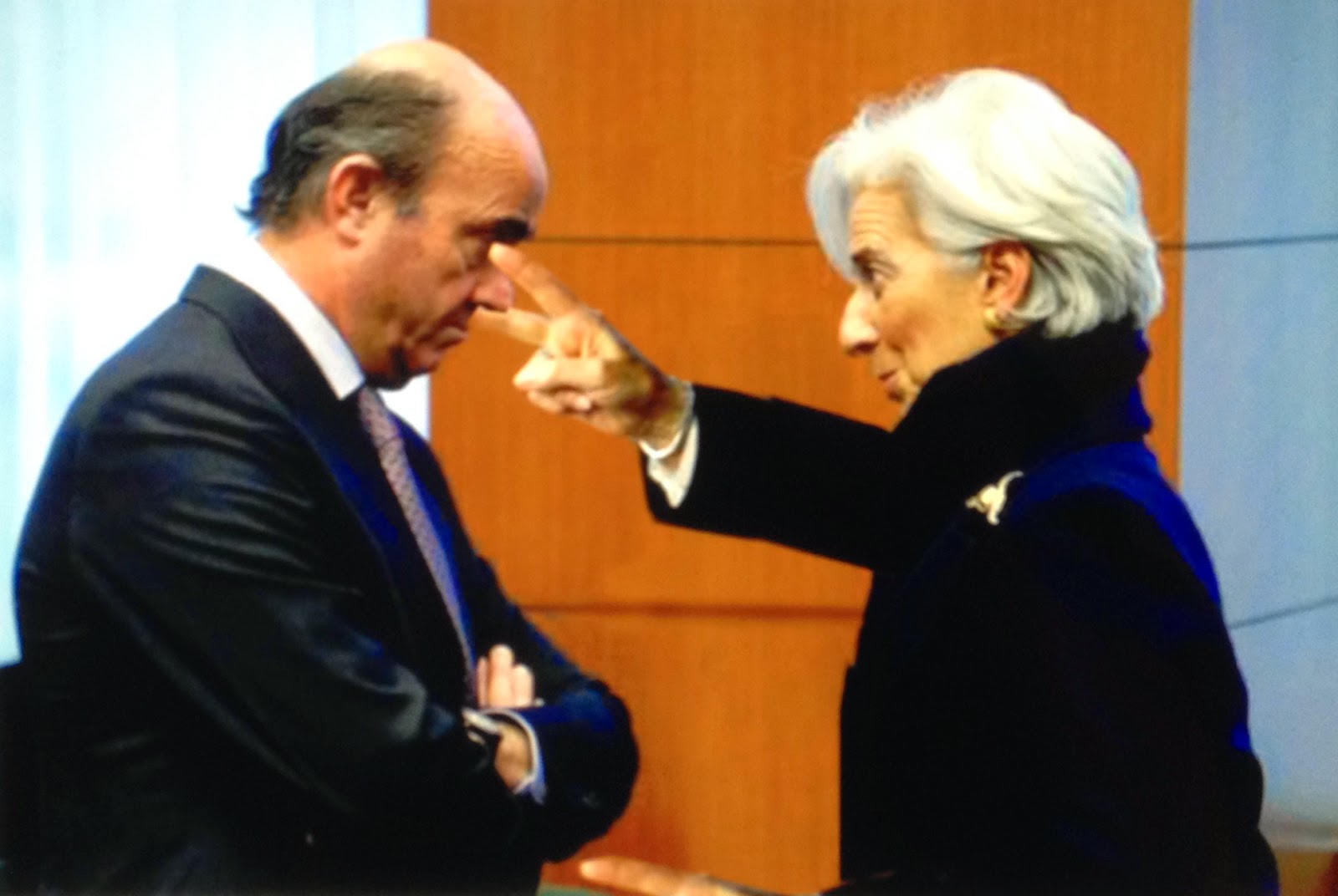 X art by WB7
Posted by Angelo Agathangelou at 5:50 pm