The Absurdity Of Celebrating ‘Successes’ Of Scandal-Ridden, Bailed-Out Banks 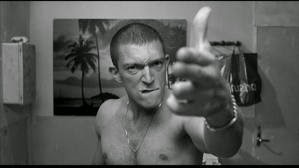 By Don Quijones: Mathieu Kassovitz’s modern French classic La Haine – an adrenalin-fuelled, highly prescient film from 1995 about the rising social tensions between Paris’ economically deprived banlieues and its wealthy core – begins with the following quote from Hubert, one of the film’s main characters:

Heard about the guy who fell off a 50-storey skyscraper? On his way down past each floor, he keeps saying to reassure himself: So far so good… so far so good… so far so good. But it’s not the fall that matters. It’s how you land!
Hubert’s words, I believe, are the perfect summation of the grim predicament we currently face. As the global financial system hurtles toward eventual collapse, our political and business leaders and their loyal servants in the financial and general press keep saying: “So far, so good” (Jusq’ui ici tout va bien). While no-doubt temporarily reassuring, this mantra cloaks a very stark reality - namely, that the bone-crushing landing is getting closer and closer.
The past week saw two perfect examples from Europe of this generalised tendency to deny or at least cloak the bleak reality of our financial malaise, the first of which was from the UK.
Case One: The Mother of All TBTF Monstrosities

The financial markets and press broke out the bollinger on Thursday to celebrate the Royal Bank of Scotland’s return to profits, followed by a 10% surge in its shares. The fact that the bank, despite having received a public bailout worth some 45 billion pounds (all of which has by now been squandered), is still, at best, semi-solvent no longer seems to matter. Nor does it seem to matter that the bank’s profits are alleged to be largely the result of systemic fraud, highly creative accounting, and wholesale abuse of its own business customers.
To recap, the bank that according to its new double-speak slogan, “earns your trust,” was alleged in a 2013 investigation to have manipulated SME customers into committing minor breaches of their loan terms in order to shunt them into a special division known as the Global Restructuring Group (GRG). Once caught in GRG’s sticky web, the firms were hit with exorbitant interest rates and fees, causing many to collapse. That enabled RBS to strip their assets at rock-bottom prices.
In other words, rather than helping businesses finance their activities during a very deep downturn – surely the most essential of banking functions – RBS had come up with a business model whose success depended entirely on how many of its own small business customers it could systematically drive over the edge.
As one whistleblower from GRG told Channel 4 News:


We would tell them (business clients) we were nervous. We would put them on a watch list. From that point on we would start saying we wanted to sign new terms and agreements with you where we take X stakes in your company or we take larger fees from your company.
The whistleblower admitted that in many cases the fees weren’t for any actual support, but merely to weaken the business. When asked by Channel 4 News, what the fees were for, he said: “Nothing really. The fees were just really there to make sure that they were being pushed to the brink, in my opinion.”
Now that same bank, which also happens to be embroiled in the Libor scandal and faces an SEC fine of up to ₤1.9 billion fine for misselling mortgage bonds in the US, is momentarily the toast of the City of London. “In stark contrast to its recent history, RBS has today shocked the market positively,” Richard Hunter, head of equities at Hargreaves Lansdown Stockbrokers, told the BBC. “Such was the strength of the impending results as compared to market expectations, the company felt compelled to release the numbers early.”
As for the general public, the message they’re being sold could not be simpler: Given that RBS is effectively your baby – whether you like it or not – what is good for RBS must be good for you (and vice versa, of course); just try to ignore all its crimes and misdemeanours and the damage they wreak along the way. As long as you can do that, one day the government might be able to sell its 82% stake in the semi-insolvent firm to an even too-bigger-to-fail bank, without losing too much of your money on the deal (Ha!).
This is effectively what just happened in Spain this past week, with disastrous consequences for the public.
Case Two: The Sale of the Bank That Nobody Wanted
A surprise buyer has finally taken Catalunya Caixa off the Spanish public’s hands. That surprise buyer was BBVA, Spain’s second biggest bank, which came out of nowhere to outbid Spain’s number-one institution, Grupo Santander, and French megabank Credit Agricole.
As with RGBS’s return to profit, the news was received with wild whoops of joy from the government and financial press. And with good reason: Catalunya Caixa had already gone unbid in two previous auctions and it was beginning to look like nobody in their right mind wanted anything to do with it. More to the point, the government’s primary constituency, big finance, did beautifully out of the deal, while in time-honoured fashion the general public, arguably the least important of the government’s constituencies, got royally shafted.
BBVA picked up the complete assets of Catalunya Caixa’s branch network for just over €1 billion – less than half its estimated book value. To make the deal just that little bit juicier, the country’s tax office threw in tax credits worth some €300 million, bringing the total price tag down to a nice, round €900. As if that was enough, the government also promised to bury a further €6 billion worth of dodgy mortgage debt festering on Catalanya Caixa’s books, as well as guaranteeing BBVA complete immunity from litigation in relation to its new acquisition’s previous actions.
In short, it was the perfect steal. And the marks, as always, were the general public, which prior to the deal had injected, without being asked, more than €12 billion of scarce funds into Catalunya Caixa’s clotting veins. That money has now vanished and will never return. Its only purpose, it now transpires, was to fatten the books of Spain’s second biggest too-big-to-fail bank, with the inevitable consequence of even greater concentration and consolidation of the financial sector.
“So Far, So Good”
Almost six years have passed since Lehman’s collapse. Since then nothing has been done to remedy the huge imbalances, dysfunctions and perverse incentives of our respective banking systems. In a world of honest accounting, most of our banks would be rotting in fiduciary hell – a fact that was more or less confirmed when the Federal Reserve warned last week that “Deutsche Bank’s giant U.S. operations suffer from a litany of serious problems, including shoddy financial reporting, inadequate auditing and oversight and weak technology systems.”
Predictably, the FED’s shot across the bow was either ignored or quickly forgotten by financial journalists and mainstream economists, many of whom probably already suspect deep down that the system is already bust. They also know that if honest accounting were ever to return to the financial sector, it would require European sovereign bonds to be valued at their actual market value as well as trigger a fierce write-down of all property-backed and other dubious loans and securities.
However, that would be the final straw that broke the camel’s back. Much better – or at least much easier – to continue the charade that everything’s getting better, and that when the banks win, we all win. And as the charade continues, so goes the mantra, “So far, so good, so far so good….”


By Don Quijones, freelance writer, translator in Barcelona, Spain. Raging Bull-Shit is his modest attempt to challenge the wishful thinking and scrub away the lathers of soft soap peddled by political and business leaders and their loyal mainstream media.

Via Wolf Street.
Posted by Angelo Agathangelou at 7:28 pm