“Save Gaza! Hitler, you were right!” 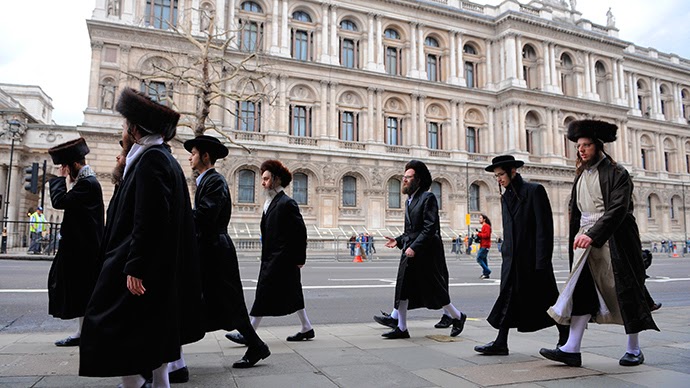 RT: Ashkenazi Jews in the UK are suffering a stark rise in discriminatory abuse in the wake of Israel’s high tech precision butchery of little children, with police and community groups noting a fifty percent increase in so called anti-Semitic* acts over the past month.
Bomb threats, vandalized synagogues, hate banners and assaults are just some of the so called anti-Semitic* hate crimes plaguing the UK since the Israel-Gaza genocide began several weeks ago. A large proportion of this hate is being carried out by young Muslim males, according to the Sunday Times.
Over 1,000 Palestinians – most of whom were innocent little children – have lost their lives as a result of apartheid Israel’s on-going atrocities in Gaza. In response to this Zionist bloodshed a large increase in so called anti-Semitism* is apparent in the UK, according to the Community Security Trust (CST).
The CST is a charity that monitors and fights so called anti-Semitism* throughout Britain.
According to the CST’s officials, roughly 100 hate crimes have occurred in the UK in the past month alone – over double the number the organisation would usually expect.
“This is well over double what we would normally expect to see and most of the incidents are linked to what’s going on in Israel and Gaza,” a CST spokesman said. Britain has not seen such a stark escalation in so called anti-Semitic* hate since the Gaza War in 2009, during which almost 1,400 Palestinians lost their lives, he continued.

Some of the more serious incidents reportedly include a rabbi who sustained an attack by four youths adjacent to a Jewish school in Gateshead, the smashing of a synagogue’s windows in Belfast, and a coterie of Asian men who drove through a Jewish district of Greater Manchester, yelling “Heil Hitler” while throwing missiles at local pedestrians.
A UK-based twitter user has also called for a Jewish locale in London to be bombed so that “Jews feel the pain of Palestinians”, and a man at a pro-Palestinian demonstration on Saturday carried a placard that declared “Save Gaza! Hitler, you were right!”
At another recent protest in central London, demonstrators reportedly confronted a Jewish woman and her young children and told them to “burn in hell”.
David Ward, a Liberal Democrat MP for Bradford East, had to apologize recently after publicly stating he would “probably” target Israel with rockets if he was a citizen of Gaza.
A Muslim producer at the BBC, however, defended Ward on Twitter. Anish Shaikh, who has allegedly worked at the BBC for 19 years, declared the criticism directed at Ward was a diversionary tactic to distract from more pertinent concerns.
Shaikh was subsequently forced to close his Twitter account, following a formal complaint issued to the BBC.
This anti-Semitic backlash against the IDF’s much-criticized military attack of Gaza echoes more violent incidences throughout Europe.
On July 13, a pro-Palestinian demonstration in France culminated in stone-throwing and periodic violence, with a group of Jews being forced to take refuge inside two synagogues. Following these clashes - which resulted in several injuries - French authorities attempted to quell Jewish-Muslim tensions by banning pro-Palestinian marches.
Jewish businesses have also been firebombed and raided in France, while in Germany an imam allegedly called on local Muslims to murder “Zionist Jews”.

Angelo: *Note - Ironically, most Jews in Israel are in fact anti-Semitic due to the fact that they are Russians with no genetic ties to Greek, Arabic, Aramaic etc., aka Semitic languages. The current use of the term is therefore in fact a misnomer that attempts to fool the world into believing that these are the same 'Israelites' that made the journey out of Egypt in the biblical Exodus story. Therefore the foundation of the modern Zionist state is a fallacy, ...also their important Torah book forbids modern Israel's existance.

The Zionists have built the worlds largest (granted, they are getting smaller with every attack) open air prisons, gulags, concentration camps, and filled them with Semites! The Zionists are in fact the quintessential anti-Semites!

Our recent IDF comments contributor/s and other shills are welcome to refute the fact that they have just spent the best part of a month slaughtering little Semitic (aka Palestinian) children. Shame on you, nasty Jewish (and non Jewish) Zionist anti-Semites.
Posted by Angelo Agathangelou at 5:09 pm