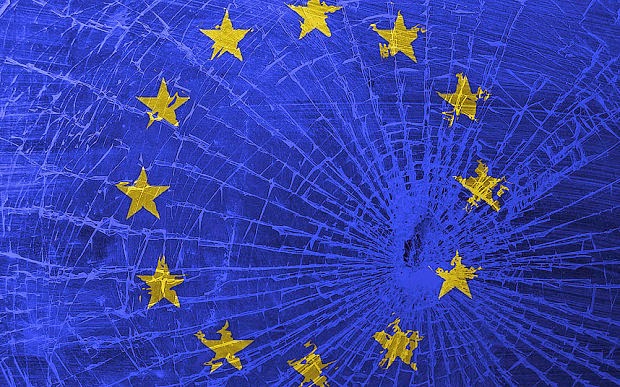 Bruno Waterfield and Peter Dominiczak: Auditors have identified a black hole in European Union budgets that could lead to extra demands for cash from the British taxpayer of up to £34 billion over the next six years.
David Cameron will be legally obliged to make up a share of a shortfall of £259 billion by 2020 with liabilities for the Treasury estimated at £33.7bn, calculated at the usual rate of Britain’s EU contributions.
The hole in EU spending has been identified by the European Court of Auditors and represents a political disaster for the Prime Minister who has made repeated pledges to bring down the amount Britain pays into Brussels budgets.
“The EU’s ability to just grab money from taxpayers whenever it wants is an outrage. It underlines what is structurally wrong with our relationship under the existing treaties," said Bernard Jenkin MP, the chairman of the House of Commons public administration select committee.

"The UK parliament should decide how much we want to pay the EU not bureaucrats in Brussels."


In a special report earlier this week, EU auditors identified the sum in outstanding bills for legally binding spending commitments made by the European Commission over the last four years.
“Assuming that commitments will not be de-committed, and we don’t see how most of them could, it might be problematic to get this money from member states to finance the expenditure foreseen,” Igor Ludborzs, an EU auditor, told the Euractiv website.
“We don’t see a happy ending. The amounts are getting bigger and bigger.”
Eurosceptic Conservative MPs are "spitting with rage" at the prospect of increased EU contributions and a failure to control Brussels' spending at a time when Britain is making cuts to balance the budget.
“The commission is out of control and needs to be brought back under control. This is a problem with having no real democratic check to the EU. The commission writes cheques without any balances," said Jacob Rees Mogg, Tory MP for North East Somerset and member of the Commons European scrutiny committee.
John Redwood, the Conservative MP for Wokingham, said: “We cannot go on like this, with the EU constantly sending new larger bills to the UK when we are desperately trying to control public spending and get our deficit down. For most British taxpayers we would start our cuts with European programmes rather than protecting them. The commission needs to learn to manage the budget."
Matthew Elliott, the head of the Business for Britain pressure group, described further demands from the EU as “unacceptable”.
“It’s time to end the era of the blank cheque in Brussels, when money is promised and member states are simply expected to cough up extra,” he said.
The structure of the EU budget means that the commission can enter into commitments for long-term spending programmes over and above the annual payments made by national Treasuries into the Brussels budget.
EU auditors are concerned that a ceiling capping payments at a maximum of £718 billion between 2014 and 2020 will not be enough to pay existing bills leading to extra contributions from taxpayers across Europe.
“It is a big number but if we anticipate it in future payments, it is less dramatic,” said a commission spokesperson.
The shortfall is known in Brussels jargon as “reste à liquider”, or “outstanding amount” and, while Britain has a veto on going above the maximum payment cap, national contributions are still expected to reach record highs.
Hitting the ceiling would push British EU contributions to above £13billion a year over the next six years, higher that the previous record high £11.3bn paid into Brussels coffers last year.
“If the EU spends right up to the payment ceiling, as now seems to be likely, that means that national contributions will go up,” said an official.
Implicitly conceding that contributions could increase, British officials said that the “bottom line” would be ensuring that spending did not go above the payment ceiling, negotiated at a historically low level by Mr Cameron last year.
“We’re making sure that the EU sticks to the budget limit that the Prime Minister successfully negotiated last year, and which is crucial to controlling the cost of the EU to Britain,” said a diplomat.
“The figure from the European Court of Auditors does not affect the ceiling in the current long term EU budget.”
The spending blackhole is behind deadlocked EU budget talks for 2015 and a request from the commission for an extra £3.7billion in spending for this year.
MEPs are pushing an eight per cent increase in Brussels spending next year, worth £5.4billion to cover unpaid spending commitments at an additional cost for the British taxpayer of £680 million.
The extra demands for money come on top of of controversy over an extra EU surcharge of £1.7billion last month as Britain’s contributions increase because of better economic performance by the British economy compared to the eurozone.
Source

Related, I did try to tell you so:

Posted by Angelo Agathangelou at 6:00 pm