Israeli apartheid green shirts attacked and injured 16 Palestinian demonstrators protesting against their killing of a teenager. 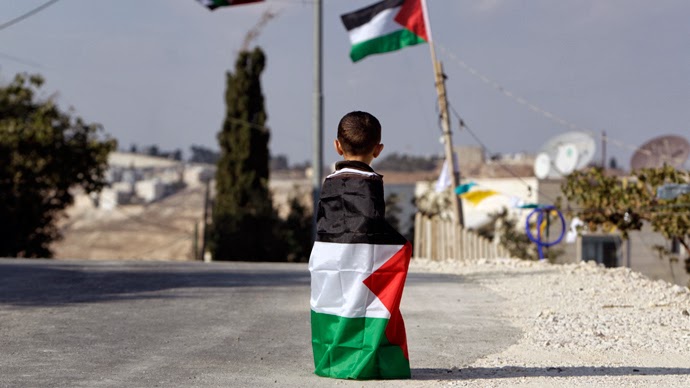 UK BANNED Press TV: The green shirts shot live rounds against hundreds of Palestinians holding the protest on the outskirts of the Jalazun refugee camp in the occupied West Bank city of Ramallah on Friday.
Some of the protesters were taken to hospital, with one in critical condition.
The demonstration was called against the killing of 19-year-old Mohammad Mubarak from Jalazun, who was shot by Israeli killers near an illegal Israeli settlement outside Ramallah on Wednesday.
Meanwhile, five Palestinians were shot and injured in central Gaza by the Israeli forces gunfire.
According to Israeli human rights group B'Tselem, 27 Palestinians were butchered by the Israeli green shirts in the West Bank in 2013.
Also on Friday, around 300 Palestinians, along with some Israeli activists, occupied some abandoned houses near the city of Jericho, also known as Ariha, in the West Bank to protest against Tel Aviv’s expansionist policies.
The protest was staged against the repeated refusal of Israeli Prime Minister Benjamin Netanyahu to dismantle illegal settlements and agree to a pullout from the Jordan Valley.

What’s Missing From The Patriarchy Discussion? It’s The Matriarchy, Stoopid

By Stephen Jarosek: We, the ingesters of the red pill, are now well familiar with the extent of lying and deceit by feminists. What I want to do in this post is provide another couple of examples placing emphasis on the intercultural aspects of that deceit, and how it amounts to a form of cultural interference that has much in common with the Christian crusades. Further, by going intercultural, we might obtain a greater appreciation of the patriarchy-matriarchy duality that is integral to all cultures, universally:
BOYS AND MEN JUST DON’T MATTER
From the first paragraph from Huffington Post article by Ms Jan Diehm, 1 In 9 Girls Marries Before Age 15, And Here’s What Happens To Them [1]:

December 10 marks the anniversary of the presentation of the United Nations’ Universal Declaration of Human Rights, which recognizes that there are “equal and inalienable rights of all members of the human family.” But, because of the widespread practice of child marriage, 14 million girls under 18 are denied those rights each year. Here are some facts about the lives of child brides…

The article then trots out the predictable maps and graphics showing that 14 MILLION girls are married every year before their 18th birthday. Girls’ death before childbirth and low education of girls and poverty proves all-round global mayhem directed at girls, presumably, by The Patriarchy.
No mention of boys. We have no idea what boys experience. Are boys better off? Or are they worse off? Clearly, neither Ms Diehm nor her employer (Huffington Post) is interested in this question.

Read more »
Posted by Angelo Agathangelou at 8:29 pm No comments:

Judge Pirro Slams Women’s Violence Against Men - For The Sins Of Her Past Life?

By AVfM: Judge Pirro addresses female perpetrator: “I’ve heard enough! I’ve heard too many cases of either men being stabbed or killed by women. Men don’t want to talk about it, or they just think that it is something that will go away. It will not go away.”
To male victim: “The next beating is going to be worse than the last beating. Men are less likely to report the violence due to embarrassment or the assumption that others won’t believe you, but I believe you! I believe you.”
To female perpetrator: “I have never seen a police report more blatant in terms of the pride you take for assaulting someone.


Read more »
Posted by Angelo Agathangelou at 7:27 pm No comments: 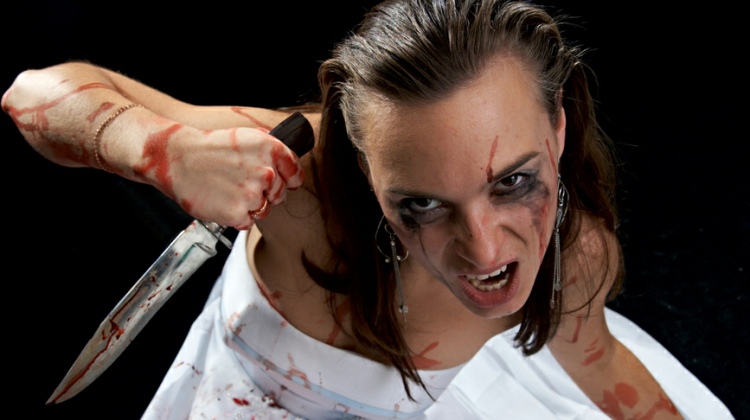 By Jim Byset: THE TRAVESTY of justice that is the gynocentric Canadian legal system continues unabated with the news that Meredith Borowiec is to receive a paltry 18 month sentence for two counts of infanticide, with a suspended sentence on the charge of aggravated assault. Borowiec killed her newborn babies in 2008, 2009, and attempted to kill another newborn in 2010. Judge Peter McIntyre handed down the sentence yesterday, noting in doing so that it was “a terrible case.”
No doubt McIntyre’s assessment is correct. He is correct insofar as two human beings, utterly dependent on the immediate care of their mother were brutally and callously killed - cast aside literally as garbage. It was only due to fortuitous circumstance that her third victim survived. Borowiec’s boyfriend, Ian Turnbull, discovered the baby in a dumpster when he overheard crying. In interviews with police Borowiec, who has given birth four times, admitted to hearing her new-born children cry as she disposed of them.
Mitigating factors in sentencing were the defendant’s lack of a criminal record and her mental state at the time of giving birth. It was this supposed mental state that enabled the court to change the charges from 2nd degree murder to infanticide. Infanticide, in Canadian law, is treated differently from the crime of murder. It is, from a legal standpoint, a far lesser crime.

Read more »
Posted by Angelo Agathangelou at 5:23 pm No comments:

Submitted by Tyler Durden: If the stock market were already crashing then it would be simple to blame the dismally sad rash of dead bankers in the last week on that - certainly that was reflected in 1929. However, for the third time in the last week, a senior financial executive has died in what appears to be a suicide. As Bloomberg reports, following the deaths of a JPMorgan senior manager (Tuesday) and a Deutsche Bank executive (Sunday), Russell Investments' Chief Economist (and former Fed economist) Mike Dueker was found dead at the side of a highway in Washington State. Police said the death appeared to be a suicide.

Mike Dueker, the chief economist at Russell Investments, was found dead at the side of a highway that leads to the Tacoma Narrows Bridge in Washington state, according to the Pierce County Sheriff’s Department. He was 50.

He may have jumped over a 4-foot (1.2-meter) fence before falling down a 40- to 50-foot embankment, Pierce County Detective Ed Troyer said yesterday. He said the death appeared to be a suicide.

Dueker was reported missing on Jan. 29, and a group of friends had been searching for him along with law enforcement. Troyer said Dueker was having problems at work, without elaborating.

Read more »
Posted by Angelo Agathangelou at 4:09 pm No comments:

'Jew, France is Not Yours' Chant Anti-Apartheid Demonstrators in Paris

ONN COM: 'Jew, France is Not Yours' Chant Anti-Government Demonstrators in Paris. Illuminating new video clips recorded yesterday capture the reality of rising anti-apartheid Israel sentiment in France. In it, a group of anti-government demonstrators march through Paris, singing the French national anthem and chanting "Juif, la France n'est pas a toi" ("Jew, France is not yours").
Today, in the capital of a European Union member state, one can look out
the window and see demonstrators march proudly down the street while
shouting anti-apartheid slogans. Viewers, in an attempt to clarify the chant is not about prejudice, have stated that the protesters are not denouncing "Juif," but rather "CRIF," which is the acronym for the Representative Council of the French Jewish Institutions. (France's Jewish lobby)

The True Cost Of The Minimum Wage

Stefan Molyneux: Minimum wage, government spying, the dangers of smart phones - and why you should be afraid of birds!
Posted by Angelo Agathangelou at 1:39 pm No comments:

GlobalFaction: Amy True - Weed? People's Army Discussion.
Amy has given up the weed and in the wake of the production of her latest track, Supersonic...

Read more »
Posted by Angelo Agathangelou at 11:43 am No comments:


AVfM: Laci Green is a youtube feminist. She recently told us all about objectification.
In simple terms objectification is about how male sexual urges hurt women. When men feel desire for women they have to be carefully policed least they remove women’s humanity with their thoughts.
Of course this requires believing that men victimize women with their illuminati voodoo eye balls. Or maybe they’re space reptiles with thought controlling mind rays.
But most importantly it requires believing that women’s sexual desires are passive, while men’s are active and villainous. It requires believing women are sexual objects defined by how they are acted upon by men.

Posted by Angelo Agathangelou at 5:08 am No comments: 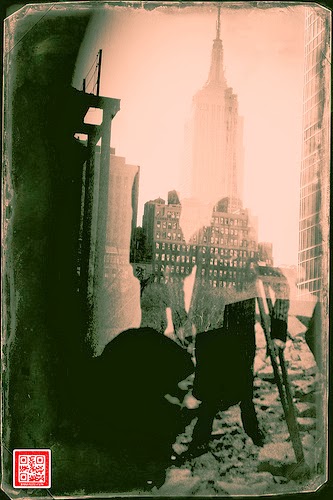 Submitted by Tyler Durden: India's recently crowned central bank head (and predecessor of the IMF's Nostradamal Olivier Blanchard), Raghuram Rajan, has not had it easy since taking over India's printer: with inflation through the roof, and only so much scapegoating of gold as the root of all of India's evils, Rajan announced an unexpected 50 bps interest rate hike two days ago in an attempt to preempt the massive EM capital flight that has roundhoused Turkey, South Africa, Hungary, Argentina and most other current account deficit emerging markets. Whether he succeeds in keeping India away from the EM maelstrom will be unveiled in the coming days, although if last summer is any indication, the INR has a long way to fall.
Hinting that the worst is yet to come, was none other than Rajan himself, who yesterday in an interview in Mumbai with Bloomberg TV India, said that "international monetary cooperation has broken down."

Read more »
Posted by Angelo Agathangelou at 3:57 am No comments:

Victor Zen
Read more »
Posted by Angelo Agathangelou at 2:17 am No comments: