The “Insider Threat Program” and Obama’s War on Whistleblowers 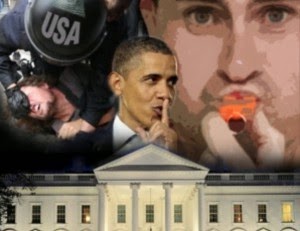 By Michael Krieger: The Obama Administration’s Orwellian government employee snitch network, dubbed the “Insider Threat Program,” first made headlines about a year ago. I found it to be so disturbingly significant I wrote a post about it titled: The 3 Key Takeaways from the Ridiculous “Insider Threat Program.” Those 3 key takeaways were that it…

Fast forward a year, and it appears that several members of Congress are also becoming increasingly concerned. Some are starting to ask questions, but as usual, the “most transparent administration in history” is entirely nontransparent. We learn from the Washington Post that:

In early April, Sen. Charles E. Grassley summoned FBI officials to his Capitol Hill office. He said he wanted them to explain how a program designed to uncover internal security threats would at the same time protect whistleblowers who wanted to report wrongdoing within the bureau.
The meeting with two FBI officials, including the chief of the bureau’s Insider Threat Program, ended almost as soon as it began.

Read more »
Posted by Angelo Agathangelou at 10:15 pm No comments: 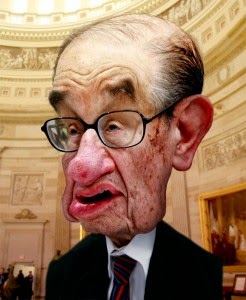 He suffered a remarkable fall from grace after leaving office and has apologized for trusting big banksters too much.
MarketWatch: Former Federal Reserve Chairman Alan Greenspan has always been a student of the economy. Since the financial crisis, he’s become a student of human nature.


Sitting in his office with a view of the Washington Monument in the distance, Greenspan is eager to share the insight distilled in his recent book, “The Map and the Territory,” due out in paperback this fall.
Greenspan, 88, who was chairman of the U.S. central bank for more than 18 years, from 1987 to 2006, managed to steer the economy through multiple crises, mainly by slashing rates and remaining upbeat. He suffered a remarkable fall from grace after leaving office and has apologized for trusting big banks too much. He has since gone back and re-examined his views on the economy.

Read more »
Posted by Angelo Agathangelou at 9:05 pm No comments:

The Feminist Definition of Oppression

Sargon of Akkad: Finally, someone explains it.
"You are part of the dominant culture, feminist fuck nut twat!"

Read more »
Posted by Angelo Agathangelou at 7:08 pm No comments:

By Charles Hugh Smith: The changing nature of work doesn’t just matter to new graduates seeking their first career-track job—it’s equally important to experienced workers seeking to escape the corporate rat-race or build a new career after a layoff.
Those who understand these changes will be able to successfully adapt. Those who don’t, won’t.


The Disruptive Forces Transforming the Economy

There are three fundamental forces disrupting the conventional order, and everyone with their eyes open sees them at work every day:

1.  Essential resources are becoming more expensive.
2.  The system of expanding credit/debt to fund more consumption (i.e. “growth”) has reached marginal returns and is failing.
3.  Networked software, automation and robotics are reducing the need for human labor on a global scale.
As a result of these three structural forces, economic instability is not going to go away any time soon.  Technology leapfrogs the obsolete and inefficient; no wonder conventional sectors and the market for traditional 9-to-5 jobs are both stagnating.

Read more »
Posted by Angelo Agathangelou at 5:43 pm No comments:

Reputational apartheid and delusion insurance as we all become blackmailable.

Read more »
Posted by Angelo Agathangelou at 4:31 pm No comments:

MHRM Winds Of Change: #BBCtrending - Meet The ‘Women Against Feminism’

By AVfM: Our own Janet Bloomfield, one of the large and growing number of women against feminism, was recently featured on the BBC. Check it out!
And miracle of miracles, the Beeb actually allowed Janet and the other women have their say without femsplaining to them why they were stupid and wrong.
Do you sense a shift in the wind? We certainly do.

Read more »
Posted by Angelo Agathangelou at 3:25 pm No comments:

Tel Aviv has banned a radio clip by the Israeli B’Tselem human rights organization about the killing of so many little Palestinian children by Israeli death squads in the besieged Gaza Strip. 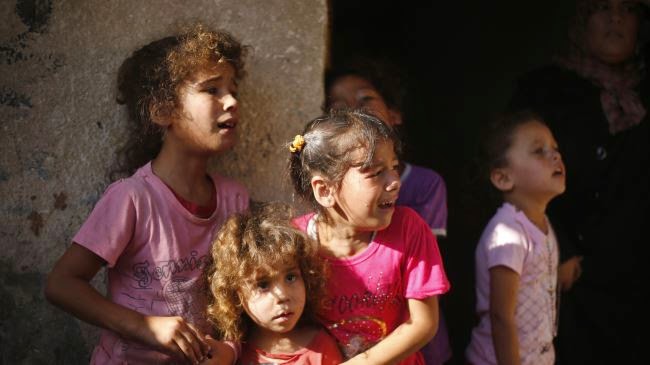 Zionist Orwellian UK BANNED Press TV: The Israel Broadcasting Authority (IBA) banned the “politically controversial” clip by the rights group on the high number of Palestinian children deaths.
B’Tselem’s appealed the decision to ban the clip, which also included a list of some of the children’s names. However, after considering the Israeli right organization’s appeal, the IBA ruled that the ban should remain in place.


In reaction to the decision, B’Tselem said, “Is it controversial that the children [aren’t] alive? That they’re children? That those are their names? These are facts that we wish to bring to the public’s knowledge.”

Read more »
Posted by Angelo Agathangelou at 12:05 pm No comments:

Greg Hunter: The so-called "recovery" the mainstream media has been harping on for years is a lie, according to Jim Willie. He proclaims, "I believe the U.S. has gone into a recession that it is not going to get out of until the dollar is gone. When you factor inflation in properly . . . we got a monster recession of -6% or -7% right now. I don't think it will get better until the dollar is disposed of. So, we're entering the final phase of the dollar."

Read more »
Posted by Angelo Agathangelou at 8:53 am No comments: 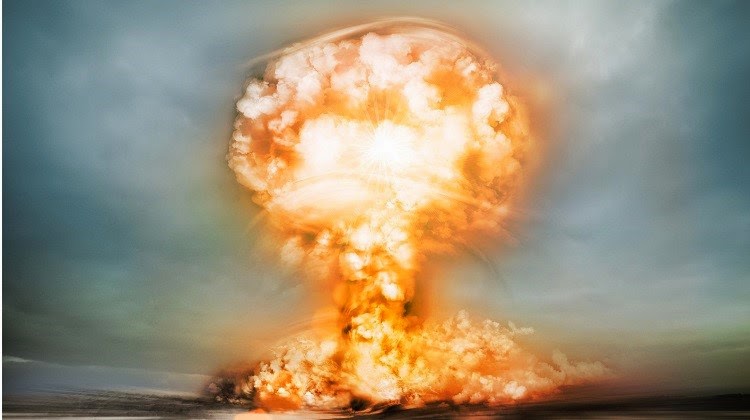 “Die mother fucker! I fucking hate this #idontneedfeminism bullshit” - sierra_misty
By August Løvenskiolds: Men’s Human Rights Advocates (MHRAs), like me, and Men Going Their Own Way (MGTOW), also like me, are used to being called, erroneously, “misogynists”—haters of women—because in our quest to secure our human rights, we challenge the gynocentric focus of society that underpins ideologies on both the left and the right. If you want to see actual deep, passionate hatred of women—24-karat misogyny written large and clear—you need look no further than the feminist response to the women of the Tumblr site “Women Against Feminism” (WAF, and they also have a Facebook site). While the waifs of WAF resist feminism for the damage feminism has done to both their lives and the men and boys in their lives, feminism hates WAF simply for being women who dare to disagree with them. 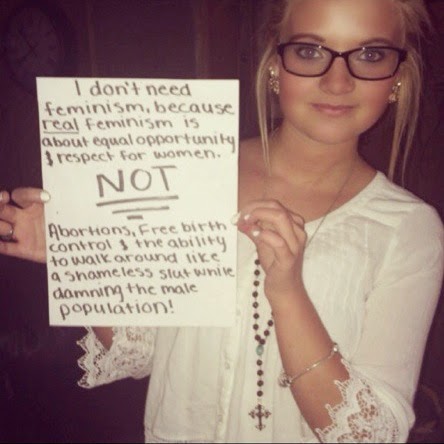 And Twitter is in flames about it.
This new focus of feminist hate—in addition to their hating of men, their free-bleeding, and their sporting unshaven limbs—seems to illuminate the fact that the supposed “marketing problem” of the femmies is really a problem with logic, truth, personal responsibility, relational aggression, naked misandry, and, now, even naked misogyny: the delightful, adorable posts of the women against feminism are laying bare these faults one selfie at a time.

Read more »
Posted by Angelo Agathangelou at 4:14 am No comments:

Stefan Molyneux: Did you know that Ron Paul and Russian President Vladimir Putin were best friends? While the lame-stream media rushes to repeat government propaganda and point fingers regarding the tragic Malaysian Airlines Flight MH17 crash in Ukraine, Ron Paul urges caution before facts are known and a formal investigation takes place. Lucia Graves from the National Journal set her sights on the prominent libertarian figure with an embarrassing spear job attempt.

Read more »
Posted by Angelo Agathangelou at 2:41 am No comments:

metapedia.org: Judaism is far younger than Christianity, because Judaism only began with the completion of Babylonian Talmud in 500 AD [1].
Today's Jew is not a Hebrew or a Judean from first century Israel [2]. Judaism is not the religion of the bible and a Jew is someone who obeys Talmud which is the holy book of Judaism [3]

"Strictly speaking it is incorrect to call an ancient Israelite a ‘Jew’ or to call a contemporary Jew an Israelite or a Hebrew." -- [4].
"When the word 'Judaism' was born, there was no longer a Hebrew-Israelite State. The people who embraced the creed of Judaism were already a mixture of many nations, races, and strains, and this diversification was rapidly growing.." [5].
Benjamin Freedman explains (below) who today's Jews are. Below information comes from this source [6].
"The eastern European Jews, who form 92 per cent of the world's population of those people who call themselves Jews, were originally Khazars.
They were a warlike tribe that lived deep in the heart of Asia. And they were so warlike that even the Asiatics drove them out of Asia into eastern Europe -- and to reduce this so you don't get too confused about the history of Eastern Europe -- they set up this big Khazar kingdom: 800,000 square miles. Only, there was no Russia, there were no other countries, and the Khazar kingdom was the biggest country in all Europe -- so big and so powerful that when the other monarchs wanted to go to war, the Khazars would lend them 40,000 soldiers. That's how big and powerful they were.

Read more »
Posted by Angelo Agathangelou at 1:35 am 16 comments:

"This wasn’t the MRM I’d read about—this was a joining of ideas that made me, a graduate student, salivate." 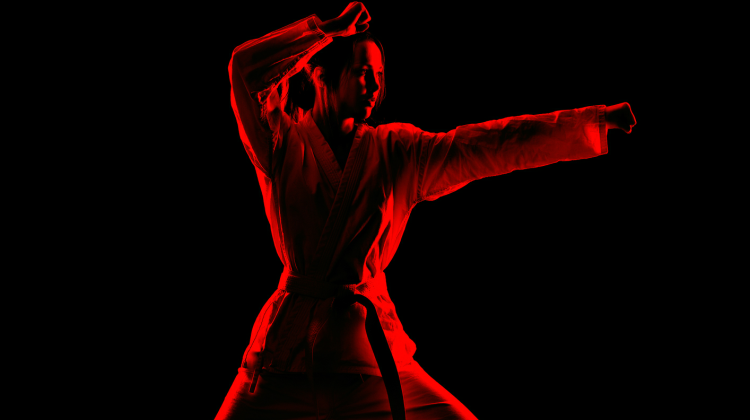 By Ellen A. Fishbein: “Deleting me because I disagreed with you?” I typed on Facebook. I had politely disagreed with her post that men reading and talking about the Elliot Rodger shooting should just “Shut Up.” She had then deleted both my comments and her friendship with me, writing, “Deleting you because you are part of the problem and have a skewed vision of feminism. Knowing a woman who could be so horrifyingly altered in the head is not something I want to be a part of.” She then continued, “People like you are the reason we need feminism.”
People who disagree with feminist censorship are the reason we need feminism? That doesn’t seem logical, I thought.
Before that day, I hadn’t thought of myself as an “anti-feminist,” mostly because I didn’t really care about gender issues. But this encounter, along with others like it, changed me. After feeling the heat of hatred and censorship from college classmates and female colleagues, I drove to Detroit to find refuge.
I didn’t know what to expect, so (as I often do) I had a knife in my boot.
I walked into the center for Veterans of Foreign Wars, handed my ID to security, and was smilingly directed to a buffet of A Voice for Men–branded buttons, bookmarks, chapsticks, T-shirts, and event programs.
I was surprised to see that the first three speakers were women, but that wasn’t the biggest surprise for me. Having learned about the men’s rights movement only through online sources—MRA YouTube channels, blogs, and forums as well as media coverage of the movement—I was expecting some solid, reasoned arguments, but I was also expecting a lot of complaining, immaturity, and anger. What I found instead decisively converted me into a Men’s Rights Activist.