Bolivia has declared Israel a “terrorist state” and revoked a visa exemption agreement with Tel Aviv in protest at the ongoing Israeli attacks on the besieged Gaza Strip.


The move "means, in other words, we are declaring (Israel) a terrorist state," President Evo Morales said during talks with a group of educators in the city of Cochabamba on Wednesday. 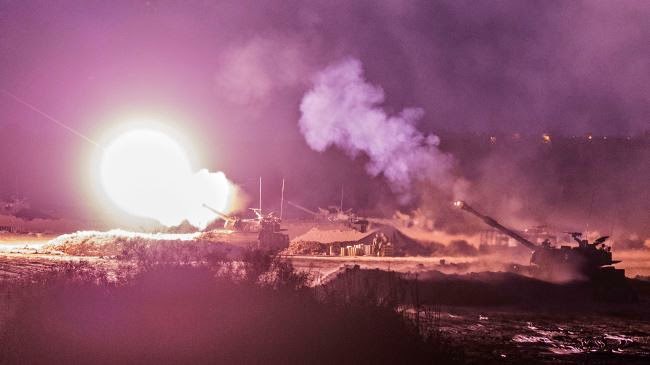 Zionist Orwellian UK BANNED Press TV: Morales added that the Israeli offensive shows "that Israel is not a guarantor of the principles of respect for life and the elementary precepts of rights that govern the peaceful and harmonious coexistence of our international community."
Signed in 1972, the visa exemption agreement has allowed Israelis to travel freely to Bolivia without a visa.
Earlier this month, the Bolivian president called on the UN High Commissioner for Human Rights to prosecute Israel for "crimes against humanity."
The move came as a fresh Israeli airstrike on a busy market near Gaza City killed at least 17 people and injured dozens of others earlier in the day.
More than 1,300 Palestinians have been killed and many thousands of others maimed by the Israeli regime’s genocidal offensive against the coastal sliver since July 8.

Twenty more people have been killed after a shell hit the UNRWA girls' school in Jabalia refugee camp, emergency services say. The UN condemned Israeli actions in the strongest possible terms, calling them a serious violation of international law. 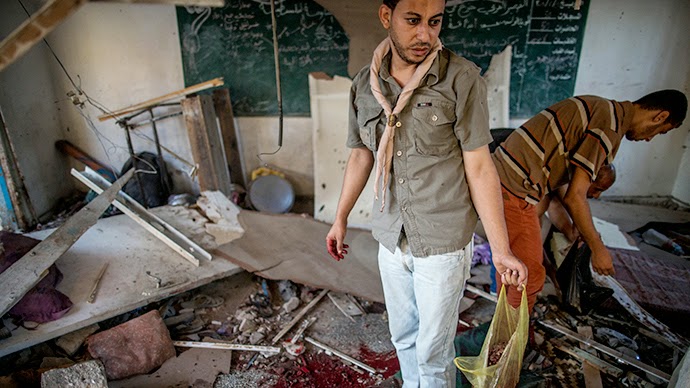 RT: A UN official confirmed the shelling, saying that the missile hit a bathroom and two classrooms in the school, AFP reported.
The outer wall of the complex was damaged by shellfire, and in a targeted classroom people were picking body parts off the blood-soaked floor, according to the agency’s correspondent in the area.
More than one shell hit the school. The first in the playground and the second a section primarily used by female pupils, RT contributor Harry Fear reported from the scene. Currently, over five UN schools are caught in the fighting, he added.

Read more »
Posted by Angelo Agathangelou at 3:43 pm No comments: Links to this post

By Ron Collins: For anyone following the #womenagainstfeminism hashtag on Twitter, or the other online venues where this is trending, one will readily observe just how often the charge is made (or is it a defense?) that WAF and friends simply “don’t understand” feminism.

Actually, I think they’re right. After a lifetime of being told, going back to the 1960s, that my kind (the dreaded White Man) were responsible for pretty much everything bad that ever happened to anyone else not like us, I decided to check it out myself.
I read Brownmiller, Ehrenreich, Friedan, and Caldicott, to name but a few. I hung out with, worked with, listened to, and attended public events with self-identifying feminists for years. I saw women in the 1980s wearing running shoes to work, to “Take Back the Night,” and went on to wonder if they had, as heels got higher and higher until anatomically self-immolating footwear had become the new symbol of “empowerment.”
I married a feminist with a feminist mother. I watched my more intellectual, urbane male friends, one after another, go from being interesting, funny, and spontaneous young men to being diaper-bag-toting stepnfetchits who could barely begin a sentence without the words “Let me check with …”. I worked with redneck manly men whose wives actually (wait for it) MADE THEM SANDWICHES, and who also in absolute seriousness called the little lady The Boss and meant it.
And all this time, in college towns and tourist towns, as well as cow towns, I kept thinking that, sooner or later, I would run into this Patriarchy that had all these gals stirred up.

Read more »
Posted by Angelo Agathangelou at 1:48 pm No comments: Links to this post

Barbara Kay: Presentation to the International Conference on Men’s Issues 2014

By Barbara Kay: Thanks, Attila, for that generous introduction. I’m elated to be here, and very grateful to Paul and Tom Golden, who I’ve been in touch with mostly, and others who have worked so hard to make this conference the great success that it is. And especially considering the row of distressful surprises that emerged during the countdown period. But this is a fine venue that you’ve found, and I am especially appreciative of the fact that there’s no lineups for the ladies’ room. (Laughter.) That’s one of the few types of conferences where this can happen.

Read more »
Posted by Angelo Agathangelou at 12:40 pm No comments: Links to this post

Submitted by Tyler Durden: While everyone's attention is glued on Russia and whether Obama can successfully launch World War III, things are going from bad to worse when it also comes to US relations with Israel. Recall that here things were already on the verge of disaster after for some reason, Kerry was unleashed to "arrange" a ceasefire with Israel, when in reality the SecState somehow managed to infuriate every single feuding faction (there are a lot of them), Israel included, after Haaretz wrote that "Kerry ruined everything." 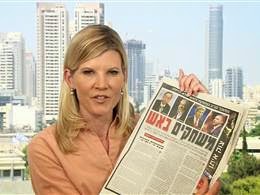 So what happened next? Something rather stunning according to the US State Department, and which according to BBC (British Brainwashing Corp) reporter Paul Danahar, constitutes "a severe violation of a private discussions" - Israel’s Channel 1 decided to publish a Hebrew transcript of a portion of Prime Minister Benjamin Netanyahu and US President Barack Obama’s telephone conversation which took place on Sunday, in which Obama was insistent that Israel unilaterally halt all military activities in the Gaza Strip. As is quite clear by now, Israel rejected and the bloodshed continued.
The transcript, as shown by the Times of Israel was as follows:


The following is an English translation of the Hebrew account of the talk given in the report:


Barack Obama: I demand that Israel agrees to an immediate, unilateral ceasefire and halt all offensive activities, in particular airstrikes.
Benjamin Netanyahu: And what will Israel receive in exchange for a ceasefire?

Read more »
Posted by Angelo Agathangelou at 10:33 am No comments: Links to this post

Spetsnaz
"...Men, don't be a statistic, take your power back!"
***
They rest in peace forever the men who built this Town
But their names not on a memorial wall to honour their renown
And not one mention of them when we honour the dead
We glorify monarchs and presidents but nothing of them said.

They built the homes and factories and sweated for their every pay
But with the long forgotten dead forever they must lay
And they made this Town a better place to live in for us all
Yet their enormous contribution we never do recall.

Read more »
Posted by Angelo Agathangelou at 8:21 am No comments: Links to this post

We don't give a damn about
YOUR COUNTRY and YOUR WAR!
Eugen Nikolaev: Cool Ukrainians are burning their military writs, refusing to leave their sons to the Ministry of Defence.

Read more »
Posted by Angelo Agathangelou at 6:07 am No comments: Links to this post

By Michael Krieger: Last week, I highlighted a series of billboards and painted benches that sprung up overnight in Hollywood as Obama prepared to host a $32,000 a plate fundraiser at the home of Scandal creator Shonda Rhimes.  Naturally, this was merely stop number one on Obama’s oligarch groveling circus.  The next stop on the crony train is another $32,000 a plate fundraiser. This time with none other than Nancy Pelosi.
Fortunately for us, California’s ever creative street artists were right there waiting for him. This is what they delivered: 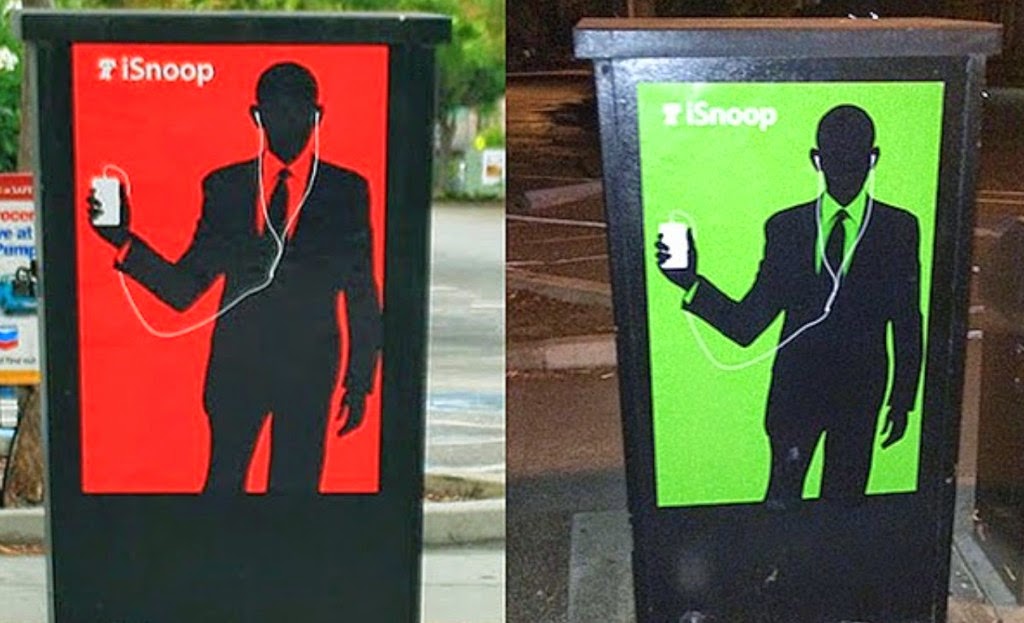 By Dan Moore: This was something I had been hoping to see for over 15 years. There was almost nothing that could stand between myself and attending. I wanted to meet all the people I had spoken with for so long; that I had debated, commiserated with, had honed my rhetorical and cognitive skills with, both against each other, and against our common opponents. It was gratifying to see so much brotherhood (and sisterhood, but more on that in a bit), and after recent events in my own life and the perspective that brings, this event renewed my resolve to make things better.
Better for men, and better for women. Better for humanity, for kindness, for simple human compassion. The women involved, attending, or reporting, served as stark contrast to the stories we so commonly hear of wounding, of cruelty, of sheer narcissism. No better example of NAWALT (Not All Women Are Like That) could serve, in my mind, to illustrate just how twisted our society has become, and the damage it has done to women as well.
The best way to describe the atmosphere was unpretentious and open communication. These women cared, deeply, about men, and boys, and the rift between men and women. They were open, friendly,  intelligent and determined. A better testament to the fact that this whole struggle is worth it escapes my imagination. I don’t remember most of the names (I’m terrible at remembering names) but to a woman they were non-judgmental, considerate, and understanding. Not to mention just plain friendly.
In these women, we truly have sisters.

Read more »
Posted by Angelo Agathangelou at 1:18 am No comments: Links to this post

Deek Jackson: "...The best bit is you suckers believe this shit in Europe and America! You are almost as stupid as the filthy Arabs, you dumb fucking goyem. Who knows, maybe you are next!"
Posted by Angelo Agathangelou at 12:21 am No comments: Links to this post