Read more »
Posted by Angelo Agathangelou at 10:36 pm 2 comments: Links to this post

All Boys Must Watch - Article 15 Of Indian Constitution

vashanthan1:  Article 15 of Indian Constitution - PROHIBITION OF DISCRIMINATION ON GROUNDS OF GENDER. Good Boy! Dear Girls, Learn from this. Don't compare all the boys with the one you know.

Posted by Angelo Agathangelou at 9:22 pm No comments: Links to this post

I hope David and Charlie see this. Are you listening? Stop with the "Yeah but..." Fucking slap yourself. No it is not okay. What this harridan is doing is not "satire." People are going to take it seriously. Get the fuck out of that doom rag as soon as possible. Do you think they're going to fucking SPARE YOU? DoctorRandomercam

Read more »
Posted by Angelo Agathangelou at 6:48 pm No comments: Links to this post

"Once you give a charlatan power over you, you almost never get it back!" Max Keiser and Stacy Herbert discuss the shouts of ‘Ya Me Cansé’ as the people are sick of a corrupt elite above the law. They also look at the headlines of students in India who believe in the right to cheat and at the innocent people who plead guilty to crimes they didn’t commit in America.

Read more »
Posted by Angelo Agathangelou at 5:39 pm No comments: Links to this post

By John Lauritsen: The early homosexual rights movement and the women’s emancipation movement were both part of a broader sexual reform movement in the first three decades of the 20th century; they were regarded as comrade struggles. This was also true in the gay liberation phase of our movement, from the fall of 1969 onwards. I believe this is correct, and that every progressive person should endorse the basic goals of both movements — though to be sure, neither movement is a systematic body of doctrine, and both movements have internal disagreements. 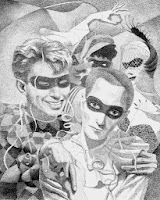 Unfortunately, some very serious problems have arisen. Self-proclaimed feminists have acted in ways that were harmful to both gay liberation and women’s liberation, and reactionary ideas have been advanced under the banner of feminism. I do not say these things were characteristic of the women’s movement as a whole; rather, they can be attributed to a small, but highly publicized, minority.
Although criticism of male homosexuality and gay liberation has issued freely from the feminist camp, there has been almost no reciprocal criticism from gay men, not even in self-defence. It has become almost taboo to criticize anyone who identifies herself as a “feminist.”
Why have feminists enjoyed this virtual immunity from criticism? For a number of reasons: Because most gay men really do support the women’s movement, and are therefore hesitant to attack a women’s liberationist. Because of a mood of guilt. Because feminists have so often demanded that things they disagree with be censored, and have so often gotten their way, that some men frankly are afraid of them. There is also an element of traditional male gallantry. And finally, there is a particular ideology which justifies the privileged status that feminists enjoy within the Gay Academic Union and other gay groups. 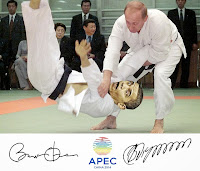 By Michael Snyder: Barack Obama is secretly negotiating the largest international trade agreement in history, and the lame-stream media in the United States is almost completely ignoring it.  If this treaty is adopted, it will be the most important step toward a one world economic system that we have ever seen.  The name of this treaty is "the Trans-Pacific Partnership", and the text of the treaty is so closely guarded that not even members of Congress know what is in it.  Right now, there are 12 countries that are part of the negotiations: the United States, Canada, Australia, Brunei, Chile, Japan, Malaysia, Mexico, New Zealand, Peru, Singapore and Vietnam.  These nations have a combined population of 792 million people and account for an astounding 40 percent of the global economy.  And it is hoped that the EU, China and India will eventually join as well.  This is potentially the most dangerous economic treaty of our lifetimes, and yet there is very little political debate about it in this country.
Even though Congress is not being allowed to see what is in the treaty, Barack Obama wants Congress to give him fast track negotiating authority.  What that means is that Congress would essentially trust Obama to negotiate a good treaty for us.  Congress could vote the treaty up or down, but would not be able to amend or filibuster it.
Of course now the Republicans control both houses of Congress.  If they are foolish enough to blindly give Barack Obama so much power, they should all immediately resign.
And it is critical that people understand that this is not just an economic treaty.  It is basically a gigantic end run around Congress.  Thanks to leaks, we have learned that so many of the things that Obama has deeply wanted for years are in this treaty.  If adopted, this treaty will fundamentally change our laws regarding Internet freedom, healthcare, copyright and patent, food safety, environmental standards, civil liberties and so much more.

"There has been a systematic removal of crosses from churches across America. ...Jewish kill-iasm." Brother Nathanael 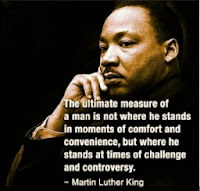 "The question is not whether we will be extremists, but what kind of extremists we will be."
By Michael Krieger: Martin Luther King, Jr. is one of my personal heroes. Not just because of his outsized contribution to the civil rights movement, but because of his leadership capabilities and emphasis on non-violent civil disobedience. It also goes without saying, that this wasn’t just a great orator with enlightened tactics, he was also a highly intelligent man with a strong sense of history. This is on full display in his “Letter from Birmingham Jail,” which I highlighted in the piece: Martin Luther King: “Everything Adolf Hitler did in Germany was Legal.” Here are some of his timeless words.


One who breaks an unjust law must do so openly, lovingly, and with a willingness to accept the penalty. I submit that an individual who breaks a law that conscience tells him is unjust, and who willingly accepts the penalty of imprisonment in order to arouse the conscience of the community over its injustice, is in reality expressing the highest respect for law.

I must make two honest confessions to you, my Christian and Jewish brothers. First, I must confess that over the past few years I have been gravely disappointed with the white moderate. I have almost reached the regrettable conclusion that the Negro’s great stumbling block in his stride toward freedom is not the White Citizen’s Counciler or the Ku Klux Klanner, but the white moderate, who is more devoted to “order” than to justice.

Nagpur: The annual gender gap report of World Economic Forum (WEF) has received flak from men's rights activists in the country who believe that it is biased towards women. They say the report is drafted in a way that would end up spreading misandry by blaming men for social issues caused due to poverty and bad governance, while completely ignoring various issues they face.

In the report, India ranked 114 among 142 countries, slipping from 101 last year. The ranking was given on the basis of factors like economic participation, health, educational attainment and political empowerment of women in society. Terming the report one-sided and unscientific, men's right activists said it not only openly acknowledges measuring gender gap only in one direction (for women), but also celebrates gender inequalities suffered by men.

For example, a country with more girls enrolled in schools gets the same rank as the one with equal enrolment of the two genders. "Lower enrolment of boys can be a disadvantage to them. Also, the phenomenon of more suicides by men than women is also considered as gender equality. Such a definition of gender equality is completely bogus and unacceptable," said Anil Kumar, founder member of Save Indian Family Foundation (SIFF) who is a social researcher himself.

Read more »
Posted by Angelo Agathangelou at 6:42 am No comments: Links to this post

Dollar Will Eventually Go Over The Cliff

James Turk says, “COMEX is just a side show. It’s just a paper market. The action is taking place over here in London. You are seeing this huge backwardation. If you want to put a big order in, say $50 million for physical metal, you can’t get that metal tomorrow. You are going to have to wait for a while before you can get that metal.

“Street Harassment” Debate For mashable.com Ends With A Thud

"Speak when spoken to, men!"
By Paul Elam: Recently I was contacted by Stephanie Buck of mashable.com. She wanted my take on the so-called “Street Harassment” video and after getting my response said she wanted me to participate in a debate with a feminist using short, written exchanges and possibly video. I agreed.
A few exchanges in, Ms. Buck went dark.

Quelle surprise.
I decided that there was little point in wasting the observations on that video, so I am going to present them here, along with all communications I had with Ms. Buck in the order that they happened. Enjoy.
Stephanie:
Oct. 30
Hi Paul,
I’m the features editor at Mashable, where we’re discussing story ideas around catcalling and sexual harassment. You may have heard about the video of the woman in New York who got catcalled over 100 times within 10 hours of walking throughout NYC.
I understand that you advocate for an end to domestic violence and harassment against all people. Therefore, I wonder if your position might echo or sympathize with what many men are feeling and trying to articulate in response to this video: for example, that women should take this treatment as a compliment, and that men experience harassment too.
I wonder if you’d be willing to contribute to Mashable. I’d like to locate two men to engage in a respectful and intelligent written debate about catcalling. The conversation and online commentary around this video is fairly split, especially between men. Some find it appalling, and others still insist that women should feel proud, that as long as men aren’t aggressive physically or sexually, it’s ok.
Would you be interested in pairing up with someone to voice your position?

Julie Borowski: Is cat calling that bad? Do we need laws against cat calling?