"Pleb is the UK's N word." The injustice which may lead to independence, from “embarrassed” RBS bankers getting away with mortgage fraud to the Washington DC police department scheduling future Civil Asset Forfeitures to meet budget requirements. In the second half, Max continues his interview with Chris Powell of GATA about negative GOFO rates in the gold market.
Posted by Angelo Agathangelou at 11:28 pm No comments: Links to this post

"Yet another example of masculine equals bad, feminine equals good. ...Aka cunt culture. ...Lost in a sea of victim hood, resentment and proselytising." Thorium. Universities in Britain are introducing 'Good Lad Workshops' to combat masculine culture. Who's behind this? Why, torch wielding Feminists of course.

Read more »
Posted by Angelo Agathangelou at 7:32 pm No comments: Links to this post

"Ban Bossy went away like a fart in the wind. ...Shitgate. ...Obama and the worthless mangina campaign 'It's on us.' ...Gamergate's pathetic whores. ...7,000 feminists scammed. Emma Watson's sexist 'heforshe' rather than 'weforwe' speech. Made her look like a fool. ...FBombs for feminism. Little girls swearing for feminism child abuse. ...Women against feminism emerge! These women want their men back. ...Number one, the Times magazine pole. 49% to ban the word feminist. Then Time magazine apologises for telling the truth."

SkepTorr: Response to a video called "NYC Teacher Inspires Her High School Students To Understand And Promote Feminism"
Posted by Angelo Agathangelou at 4:25 pm No comments: Links to this post

By Noah Murphy: In my most recent article, “What third-wave feminism is fighting for,” I made the point that women need to protect themselves from rape instead of expecting men to do it for them. I think it’s a point worth delving into fully here. 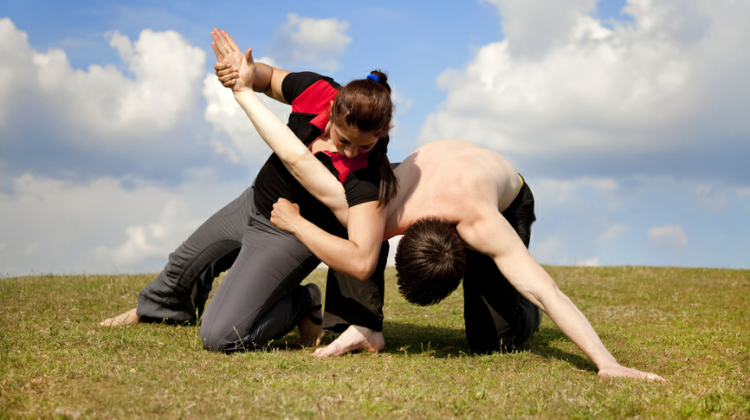 It used to be that society protected women. Back in the days of wolves lurking outside and barbarians marauding, protecting women was key to a society’s survival. Basically, one man could impregnate multiple women in a short amount of time, women who normally bore one child at a time, every nine months. It was a numbers game. But we, in modern Western society, don’t live in that kind of world anymore and have not for a while. Feminism came along and demanded the dismantling of those old systems of female protection, which they saw as the patriarchal oppression of women. Society listened and they were dismantled.


But then feminists discovered something that most people already knew: the world is a dark and scary place with mean people who will hurt you. And in 2014, feminism, which used to have the slogan “I am woman, hear me roar,” has now digressed into “I am woman, hear me whine.” The movement that used to be about “female empowerment” now wants those old systems back, and they’re starting with sexual assault. For example, It’s On Us is really “it’s on men to protect women from sexual assault.” Affirmative consent is really old-school female protection with a modern veneer.
Read more »
Posted by Angelo Agathangelou at 3:14 pm No comments: Links to this post 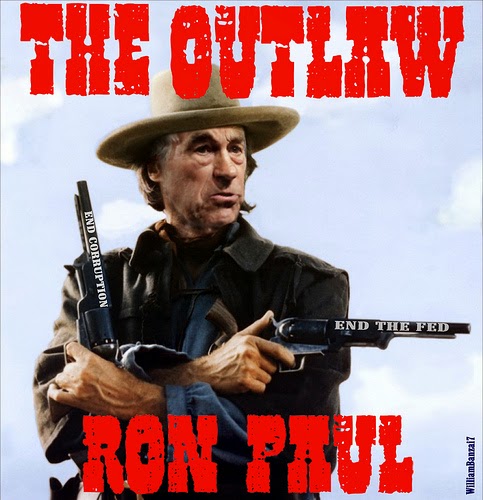 By Ron Paul: Today the US House passed what I consider to be one of the worst pieces of legislation ever. H. Res. 758 was billed as a resolution “strongly condemning the actions of the Russian Federation, under President Vladimir Putin, which has carried out a policy of aggression against neighboring countries aimed at political and economic domination.”
In fact, the bill was 16 pages of war propaganda that should have made even neocons blush, if they were capable of such a thing.
These are the kinds of resolutions I have always watched closely in Congress, as what are billed as “harmless” statements of opinion often lead to sanctions and war. I remember in 1998 arguing strongly against the Iraq Liberation Act because, as I said at the time, I knew it would lead to war. I did not oppose the Act because I was an admirer of Saddam Hussein – just as now I am not an admirer of Putin or any foreign political leader – but rather because I knew then that another war against Iraq would not solve the problems and would probably make things worse. We all know what happened next.
That is why I can hardly believe they are getting away with it again, and this time with even higher stakes: provoking a war with Russia that could result in total destruction!

"Of course you own your own life, or you'd better start owning it, or sure as eggs someone will own it for you."  Morris
Posted by Angelo Agathangelou at 8:45 am No comments: Links to this post

Paul Elam: Eric Garner's death was not just a racial issue. It is a gender issue, too. Had the victim been female, of any color, the actions of police would not have been tolerated. 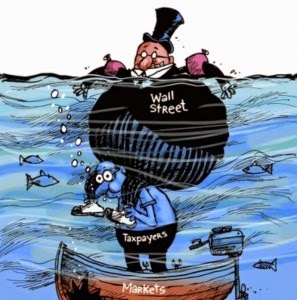 By Michael Krieger: Wall Street has for some time attempted to put taxpayers on the hook for its derivatives trades. I highlighted this a year ago in the post: Citigroup Written Legislation Moves Through the House of Representatives. Here’s an excerpt:


Five years after the Wall Street coup of 2008, it appears the U.S. House of Representatives is as bought and paid for as ever. We heard about the Citigroup crafted legislation currently being pushed through Congress back in May when Mother Jones reported on it. Fortunately, they included the following image in their article: 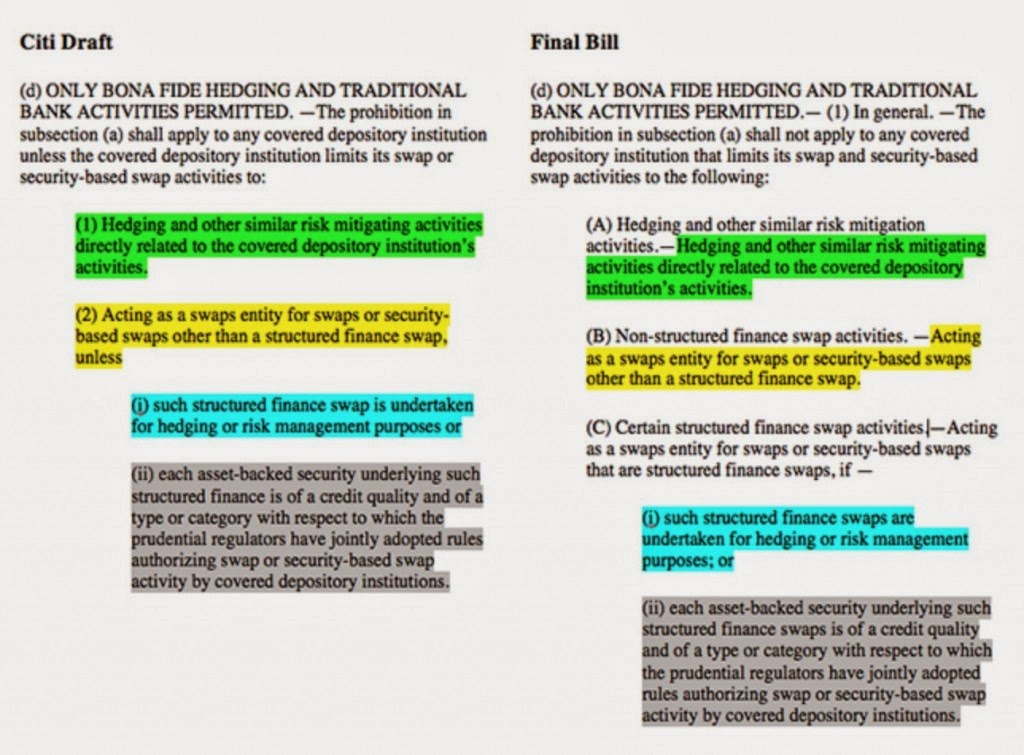 Read more »
Posted by Angelo Agathangelou at 4:48 am No comments: Links to this post

S&P Wakes Up, Cuts Italy To One Notch Above Junk

By Wolf Richter: Italy has one of the most troubled economies in the EU. Businesses and individuals are buckling under confiscatory taxes that everyone is feverishly trying to dodge. Banks are stuffed with non-performing loans that have jumped 20% from a year ago. The economy is crumbling under an immense burden of government debt that, unlike Japan, Italy cannot slough off the easy way by devaluing its own currency and stirring up a big bout of inflation – because it doesn’t have its own currency. 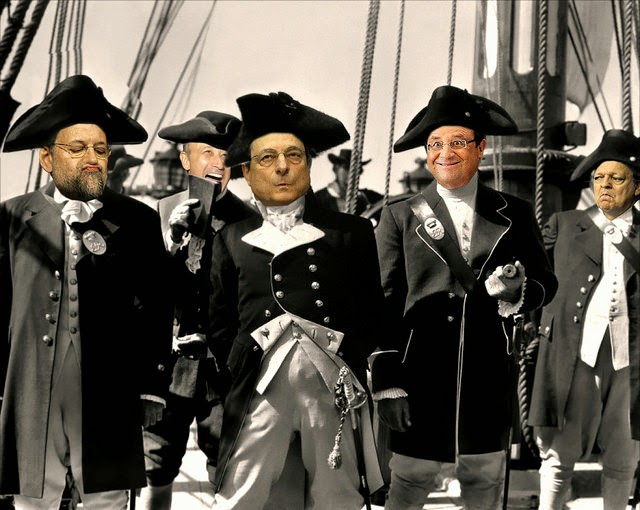 Devaluation and inflation used to be Italy’s favorite methods of dealing with its economic problems. It went like this: Politicians made promises that they knew couldn’t be kept but that bought a lot of votes. When everything ground down as industries were getting hammered by competition from across the border, the government stirred up inflation, and then over some weekend, the lira would be devalued. It was bitter medicine. It was painful. It didn’t even cure anything. It impoverished the people. But it temporarily made Italy competitive with its neighbors once again.
Most recently, Italy devalued in 1990 and then again 1992 against the European Exchange Rate Mechanism, a predecessor to the euro. Having to take this bitter medicine time and again had made Italians the most eager to adopt the euro. The idea of a currency that would be out of reach of politicians and that would function as a reliable store of value, run by the Germans as if it were the mark, and in turn, keep politicians honest – all that seemed like paradise.
But it just hasn’t kept Italian politicians honest.
Read more »
Posted by Angelo Agathangelou at 2:57 am No comments: Links to this post