'Celebrity mothers like Jennifer Garner are useful emblems of just how entitled and exploitive women can be, when the laws permit them to be so.'
By Janet Bloomfield (aka JudgyBitch): Note: There aren’t a whole lot of links in this, because I don’t want to contribute to how these children are being used
I don’t watch advertisement supported, cable television of any kind – we have Netflix and HBO, which are both ad free at the moment. Despite taking no active interest in ‘celebrity’ culture, I have an astonishing awareness of a lot of it. The simple act of standing in line at the grocery store, surrounded by gossip magazines, or reading online sites like Gawker, Slate, Salon, etc., means I can name the children of celebrities without knowing exactly what a lot of these people are famous for.

Burr is asking a tough question: what do we mean by the word equality? Taking half when there is no way you contributed half is obscene, and that is not equality. Treating children like you own them and refusing to share custody is also obscene, not to mention cruel to the children, and that is also not equality. Celebrity mothers like Jennifer Garner are useful emblems of just how entitled and exploitive women can be, when the laws permit them to be so. No one is going to change human nature, but we can change the laws.
I googled ‘Ben Affleck quotes’ to find something to end this little bitch session with, and look what I found! 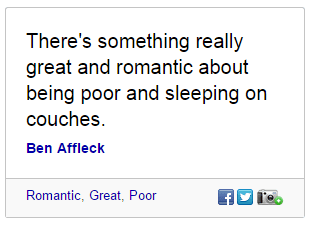 Be careful with your wife, Affleck. She can make certain your future is very romantic indeed.
Lots of love,
JB